Tonic (I) in ii-V-I turnaround on C, found at the end of the circle progression

In music, the tonic is the first scale degree of the diatonic scale and the tonal center or final resolution tone.[3] The triad formed on the tonic note, the tonic chord, is thus the most significant chord. More generally, the tonic is the pitch upon which all other pitches of a piece are hierarchically referenced.

In very much conventionally tonal music, harmonic analysis will reveal a broad prevalence of the primary (often triadic) harmonies: tonic, dominant, and subdominant (i.e., I and its chief auxiliaries a 5th removed), and especially the first two of these.
—Berry (1976)[4]

The tonic is often confused with the root, which is the reference note of a chord, rather than that of the scale. It is also represented with the Roman numeral I.

In western European tonal music of the 18th and 19th centuries, the tonic center was the most important of all the different tone centers which a composer used in a piece of music, with most pieces beginning and ending on the tonic, usually modulating to the dominant (the fifth above the tonic, or the fourth note down from the tonic) in between.

There can be major scales and minor scales. The tonic remains the same in these two different "modes", for a given key, whereas scale degrees such as the third degree and the sixth degree are altered in the minor scale.

This can be seen another way. Each minor scale uses exactly the same set of notes (key signature) as some major scale and vice-versa. The only difference is which of these notes functions as the tonal center — which of them is the tonic. For example, C major and A minor have no sharps or flats. Consequently, the tonic plays an important part in determining why music composed using a minor mode sounds different from music composed using a major mode.

A tonic may be considered a tonal center, while a pitch center functions referentially or contextually in an atonal context, often acting as axis or line of symmetry in an interval cycle.[5] Pitch centricity was coined by Arthur Berger in his "Problems of Pitch Organization in Stravinsky".[6]

The tonic diatonic function includes four separate activities or roles as the principal goal tone, initiating event, generator of other tones, and the stable center neutralizing the tension between dominant and subdominant. 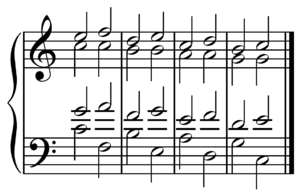