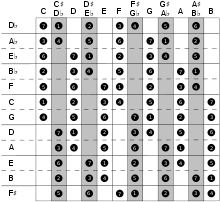 In music theory, the major scale or Ionian scale is one of the diatonic scales. It is made up of seven distinct notes, plus an eighth which duplicates the first an octave higher. In solfege these notes correspond to the syllables "Do, Re, Mi, Fa, Sol, La, Ti/Si, (Do)", the "Do" in the parenthesis at the end being the octave of the tonic starting pitch. The simplest major scale to write or play on the piano is C major, the only major scale not to require sharps or flats, using only the white keys on the piano keyboard:

In rock and popular music examples of songs in Ionian include REO Speedwagon's "Take It on the Run", The Shirelles' "Will You Love Me Tomorrow", Gordon Lightfoot's "Carefree Highway", and Gin Blossoms' "Follow You Down".[1]

Pattern of whole and half steps

A major scale may be seen as two identical tetrachords separated by a whole tone, or whole step, the new set of steps "Whole:Whole:Half:Whole:Whole:Whole:Half"(in Semi-tone 2 2 1 2 2 2 1). Each tetrachord consists of two whole steps followed by a half step. Western scales do not skip any line or space on the staff, and they do not repeat any note with a different accidental. This has the effect of forcing the key signature to feature just sharps or just flats.

The circle of fifths

The Circle of Fifths, first described in 1728 by Johann David Heinichen in his book Der General-bass, has been used ever since as a means of illustrating the relative harmonic distance between musical keys. [2] 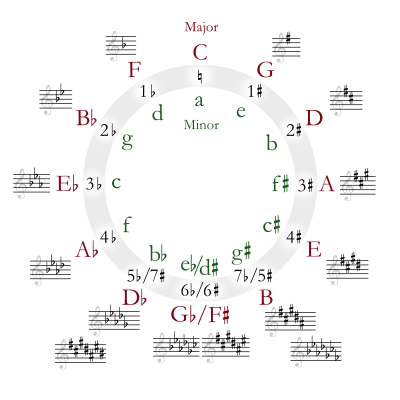 The numbers inside the circle show the number of sharps or flats in the key signature, with the sharp keys going clockwise, and the flat keys counterclockwise from C major (which has no sharps or flats.) The circular arrangement depends on enharmonic relationships in the circle, usually reckoned at six sharps or flats for the major keys of F♯ = G♭ and D♯ = E♭ for minor keys.[2] Seven sharps or flats make major keys (C♯ major and C♭ major) that may be more conveniently spelled with five flats or sharps (as D♭ major or B major).

The major scale may predominate the minor scale in Western music because of its unique harmonic properties[citation needed] ; in particular the major third is much stronger in the harmonic series (it is the 5th, 10th and 20th harmonic – see below) than the minor third (the 19th harmonic).[citation needed]

In other words, the first six notes of the harmonic series provide a consonant major chord, the fourth to sixth of which form a major triad, and seven of the nine notes between the 8th and 16th harmonics (the 7th and 15th overtones) are notes in the major scale in just intonation.[citation needed] See the following:

An illustration of the harmonic series as musical notation. The numbers above the harmonic indicate the number of cents it deviates from equal temperament. Red notes are sharp. Blue notes are flat.

In rock and popular music, the major system is, "a chromatic system involving variable qualities (major and minor) of several chords whose roots are built on the notes of the Mixolydian scale."[3]

Though, "traditional functions do not apply," such as the, "brief forays into another key," implied by secondary dominants, the, "traditional," 'five-of' (V/x) names are often used by musicians without formal training and are useful to, "distinguish them from the...chords of the chromatic-minor system."[4] For example, in C minor one finds E♭ major (III, rather than V/VI) while in C major one finds E major (V/vi, rather than III), both of which are chromatic chords.

"As in the natural-minor system, no combination of major or minor triads could be arranged on all seven notes of the scale while preserving the diatonic integrity of the aggregate pitch content; the only solution that would produce a purely diatonic pitch content would involve a diminished chord, a type usually avoided in rock."[3]

Most songs, though, use only the diatonic chords: I, ii, iii, IV, V, vi, occasionally ♭VII, "even though the lowered seventh scale degree clashes chromatically with the raised form found as the third of the V chord," (though it, "arises much more frequently than it does in minor (there, generally a Neapolitan),") and, "infrequently, the minor v appears in an otherwise diatonic harmonic setting."[3]

Examples of use of the system, or a portion, include