In music or music theory, a thirteenth is the interval between the sixth and first scale degrees when the sixth is transposed up an octave, creating a compound sixth, or thirteenth. The thirteenth (an octave plus a sixth) is most commonly major

play (help·info). The upper structure or extensions, i.e. notes beyond the seventh, in red.

A thirteenth chord is the stacking of six thirds, the last being above the 11th of an eleventh chord.[1] Thus a thirteenth chord is a tertian (built from thirds) chord containing the interval of a thirteenth, and is an extended chord if it includes the ninth and/or the eleventh. "The jazzy thirteenth is a very versatile chord and is used in many genres."[2] Since 13th chords tend to become unclear or confused with other chords when inverted they are generally found in root position.[3] For example, depending on voicing, a major triad with an added major sixth is usually called a sixth chord

Play (help·info), because the sixth serves as a substitution for the major seventh, thus considered a chord tone in such context. However, Walter Piston, writing in 1952, considered that, "a true thirteenth chord, arrived at by superposition of thirds, is a rare phenomenon even in 20th-century music."[4] This may be due to four part writing, instrument limitations, and voice leading and stylistic considerations. For example, "to make the chord more playable [on guitar], thirteenth chords often omit the fifth and the ninth."[5] 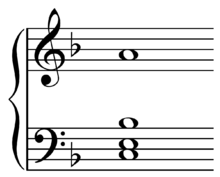 Play (help·info). The third indicates the quality of the chord as major or minor, the seventh is important for the quality as a dominant chord, while the thirteenth is necessary in a thirteenth chord.

Dominant thirteenth chord in Claude Debussy's Prelude to the Afternoon of a Faun. (1894)[7]

These voice leading guidelines may not be followed after the common practice period in techniques such as parallel harmony and in the following example:

13th chords may less often be built on degrees other than the dominant, such as the tonic or subdominant.[6]

The cadence in measures 5-8 of "Noreen's Nocture" by Oscar Peterson (transcribed by Brent Edstrom) features 13th chords and also reveals the distinction between the compound and simple intervals of a 13th and an added 6th, respectively.[8]

Play (help·info)). Eventually seven chords along a ladder of thirds.

Generally found in root position,[3] the inversion of a complete thirteenth chord including all seven notes, itself, "a rare phenomenon",[4] is a theoretic impossible since a new thirteenth chord with a different root along the is produced, for example C major 13 (C-E-G-B-D-F-A) becomes e13 (E-G-B-D-F-A-C) then G13 (G-B-D-F-A-C-E), and so on, when inverted.[12]

Given the number of notes that may be included there are a great variety of thirteenth chords. The following chords are notated below lead sheet symbols:

Debussy's Pelléas et Mélisande motif, at Mélisande's entrance and later when Golaud asks if she ever loved Pelléas, features, in addition to the already usual ninth, a thirteenth inverted to a "warm" close-position fourth.[21]