Mastering, a form of audio post-production, is the process of preparing and transferring recorded audio from a source containing the final mix to a data storage device (the master); the source from which all copies will be produced (via methods such as pressing, duplication or replication). Recently, the format choice includes using digital masters although analog masters, such as audio tapes, are still being used by the manufacturing industry and by a few engineers who have chosen to specialize in analog mastering.

In order to make a deterministic process, mastering requires critical listening; therefore, it cannot be achieved without the presence of a mastering engineer. There are software mastering tools available to facilitate this last step, but results still depend upon the accuracy of speaker monitors. In addition, "music mastering" engineers may also need to apply corrective equalization and dynamic enhancement in order to improve upon sound translation on all playback systems.[1]

In the earliest days of the recording industry, all phases of the recording and mastering process were entirely achieved by mechanical processes. Performers sang and/or played into a large acoustic horn and the master recording was created by the direct transfer of acoustic energy from the diaphragm of the recording horn to the mastering lathe, which was typically located in an adjoining room. The cutting head, driven by the energy transferred from the horn, inscribed a modulated groove into the surface of a rotating cylinder or disc. These masters were usually made from either a soft metal alloy or from wax; this gave rise to the colloquial term waxing, referring to the cutting of a record.

After the introduction of the microphone and electronic amplification in the mid-1920s, the mastering process became electro-mechanical, and electrically driven mastering lathes came into use for cutting master discs (the cylinder format by then having been superseded).

However, until the introduction of tape recording, master recordings were almost always cut direct-to-disc. Artists performed live in a specially designed studio and as the performance was underway, the signal was routed from the microphones via a mixing desk in the studio control room to the mastering lathe, where the disc was cut in real time.

Only a small minority of recordings were mastered using previously recorded material sourced from other discs.

The recording industry was revolutionized by the introduction of magnetic tape in the late 1940s (Magnetic tape was invented for recording sound by Fritz Pfleumer in 1928 in Germany, based on the invention of magnetic wire recording by Valdemar Poulsen in 1898. Not until the end of WW2 could the tecnology be found outside of Europe.), which enabled master discs to be cut separately in time and space from the actual recording process. Although tape and other technical advances dramatically improved audio quality of commercial recordings in the post-war years, the basic constraints of the electro-mechanical mastering process remained, and the inherent physical limitations of the main commercial recording media—the 78 rpm disc and the later 7-inch 45 rpm single and the 33-1/3 rpm LP record—meant that the audio quality, dynamic range, and running time of master discs were still limited compared to later media such as the compact disc.

Running times were constrained by the diameter of the disc and the density with which grooves could be inscribed on the surface without cutting into each other. Dynamic range was also limited by the fact that if the signal level coming from the master tape was too high, the highly sensitive cutting head might jump off the surface of the disc during the cutting process.

From the 1950s until the advent of digital recording in the late 1970s, the mastering process typically went through several stages. Once the studio recording on multi-track tape was complete, a final mix was prepared and dubbed down to the master tape, usually either a single-track mono or two-track stereo tape.

Record mastering became a highly prized and skilled craft, and it was widely recognized that good mastering could make or break a commercial pop recording. As a result, during the peak years of the pop music boom from the 1950s to the 1980s, the best mastering engineers were in high demand.

In large recording companies such as EMI, the mastering process was usually controlled by specialist staff technicians who were conservative in their work practices. These big companies were often reluctant to make changes to their recording and production processes—for example, EMI was very slow in taking up innovations in multi-track recording and they did not install 8-track recorders in their Abbey Road Studios until the late 1960s, more than a decade after the first commercial 8-track recorders were installed by American independent studios.[2] 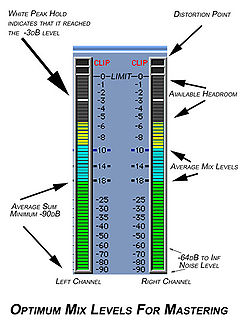 In the 1990s, electro-mechanical processes were largely superseded by digital technology, with digital recordings stored on HDDs or Digital Tape and transferred to CD. The digital audio workstation (DAW) became common in many mastering facilities, allowing the off-line manipulation of recorded audio via a graphical user interface (GUI). Although many digital processing tools are common during mastering, it is also very common to use analog media and processing equipment for the mastering stage.[1]

Although there is no "optimum mix level for mastering", the example in the picture to the right only suggests what mix levels are ideal for the studio engineer to render and for the mastering engineer to process.[3] It is important to allow enough headroom for the mastering engineer's work. Many[who?] mastering engineers working with digital equipment would agree that a minimum of 3 to 6 dB of available headroom is critical to perform good mastering. Ideal peak levels should not exceed −3 dBFSD and the average sum of the left and right channels should be at around −10 to −18 dBFSD (As shown on the picture to the right).

There are mastering engineers who feel that digital technology, as of 2007, has not progressed enough in quality to supersede analog technology entirely. Many top mastering studios, including Bernie Grundman Mastering (which mastered 37 Grammy-nominated albums in 2005 alone,[4]) and Gateway Mastering still embrace analog signal processing (such as analog equalization) within the mastering process.

The music mastering studio is very different from a normal audio recording studio. In fact, all the equipment and gear found in most recording and mixing studios can actually hinder the acoustics of a room to accurately monitor sound. Thus, the correct room acoustics and arrangement of the equipment inside a mastering studio is an important factor since the mastering engineer (ME) needs to hear each mix in detail. This room design should be non-environmental or with a minimum room interference. By working with an experienced mastering engineer, the recording artist is also open to alternative opinions and technical advice.

The source material, ideally at the original resolution, is processed using equalization, compression, limiting, noise reduction and other processes. More tasks, such as editing, pre-gapping, leveling, fading in and out, noise reduction and other signal restoration and enhancement processes can be applied as part of the mastering stage. This step prepares the music for either digital or analog, e.g. vinyl, replication. The source material is put in the proper order, commonly referred to as assembly (or 'track') sequencing.

If the material is destined for vinyl release, additional processing, such as dynamic range reduction, frequency dependent stereo–to–mono fold-down and equalization, may be applied to compensate for the limitations of that medium. Finally, for compact disc release, Start of Track, End of Track, and Indexes are defined for disc navigation. Subsequently, it is rendered either to a physical medium, such as a CD-R or DVD-R, or to a DDP file set, the standard method of secure delivery for CD and DVD replication masters. The specific medium varies, depending on the intended release format of the final product. For digital audio releases, there is more than one possible master medium, chosen based on replication factory requirements or record label security concerns. Regardless of what delivery method is chosen, the replicator will transfer the audio to a glass master that will generate metal stampers for replication.

The process of audio mastering varies depending on the specific needs of the audio to be processed. Mastering engineers need to examine the types of input media, the expectations of the source producer or recipient, the limitations of the end medium and process the subject accordingly. General rules of thumb can rarely be applied.

Steps of the process typically include but are not limited to the following:

To finish mastering a CD the track markers must be inserted along with ISRC, PQ codes,[further explanation needed] text and other information necessary to replicate a CD. Vinyl LP and cassettes have their own pre-duplication requirements for a finished master.