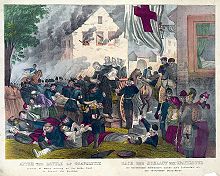 "After the Battle of Gravelotte. Sisters of Mercy arriving on the battle field to succor the wounded." Unsigned lithograph, 1870 or 1871.

The Religious Order of the Sisters of Mercy (RSM) is an order of Catholic women founded by Catherine McAuley in Dublin, Ireland, in 1831. As of 2003[update], the order has about 10,000 members worldwide, organized into a number of independent congregations.

Sisters of Mercy are an international community of Roman Catholic women religious vowed to serve people who suffer from poverty, sickness and lack of education with a special concern for women and children. Members take vows of poverty, chastity, and obedience, the evangelical counsels commonly vowed in religious life, and, in addition, vows of service. They continue to participate in the life of the surrounding community. In keeping with their mission of serving the poor and needy, many sisters engage in teaching, medical care, and community programs. The organization is active in lobbying and politics.

The order began when McAuley used an inherited fortune to build a "House of Mercy" in Dublin that provided educational, religious, and social services for poor women and children. The House aroused local opposition, however, it being traditional for nuns rather than lay women to engage in this sort of activity. Eventually the church hierarchy agreed to the formation of a non-cloistered order, and the sisters became known informally as the "walking nuns" for their ability to care for the poor outside a convent. The house still sits today, as the Mercy International Centre.

Main article: Abuse scandal in the Sisters of Mercy

The Order was condemned in an Irish government report on May 20, 2009 entitled the Ryan Report of "The Commission to Inquire into Child Abuse." The Irish Sisters of Mercy, in company with the Irish Christian Brothers, were two of the principal religious orders named in the report as being the most abusive. The Report described the Mercy order's tolerating physical and sexual abuse of girls in its care in Ireland. Not only that, Mercy Sisters were accused in the report of physically, verbally and emotionally, and perhaps even sexually abusing, or allowing lay personnel to sexually abuse children under the care of the order.[4]

Schools founded or run by Sisters of Mercy