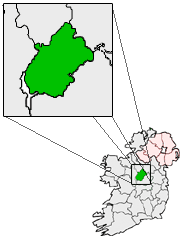 Longford ("An Longfort" in Irish) is the county town of in the Midlands of . According to the 2006 census, the town has a population of around 13,000. Approximately one third of the county's population resides in the town.

Longford town is the second largest town on the N4 between and Sligo. It is also the axis for the convergence of the N4 and the N5 primary routes which means that traffic travelling between Dublin and Counties Mayo and Roscommon passes through the town.

The town was originally founded by Viking raiders as "", from the Irish "long" meaning ship and "phoirt" meaning port or dock. The Celtic inhabitants of Ireland did not build towns but the town came under the sway of the local clan which controlled the south and central part of the county of Longford (formerly the Kingdom of "" or Annaly) and hence, the town is referred to occasionally as "Longphort Uí Fhearghail" (Fort of O'Farrell), a Dominican founded there in 1400. Longford is the Cathedral town for the Catholic diocese of Ardagh and Clonmacnois.

Longford is about 91 km from and 122 km from . It lies on the Dublin-Sligo route of the Irish railway network, and is served by Sligo-Dublin intercity services. Despite its distance from Dublin, the town also has a regular, well-utilised commuter service to Dublin. Journeys to the capital by rail generally take about an hour and three quarters. opened on . [cite web | title=Longford station | work=Railscot - Irish Railways | url=http://www.railscot.co.uk/Ireland/Irish_railways.pdf | accessdate=2007-09-05]

There are a large number of bus services to and inside the county locally provided by the state and private bus companies.

Longford is the point where the , to and leaves the N4 road, which continues onwards to . While all motorists travelling on the N5 must pass through the town en-route to their destinations, there is little , except at peak times,this is mainly due to the traffic system of the town which has a number of one-way streets and traffic signals. The N4 Sligo road has a bypass around the town, which consists of single carriageway with hard shoulders and three roundabouts. It was opened on .

Longford's main air transport centre is located south-east of the town, near , at the local airport. receives a regular influx of small general aviation aircraft, including the and 150. The airport also boasts two flight training centres; one for general aviation fixed wing aircraft training ("Aeroclub 2000") and one for microlight aircraft flight training ("Ultraflight"). The airport is also the home of the aerobatic aircraft "EI-SAM" of acclaimed Irish international competition aerobatics pilot .

Longford town boasts a state-of-the-art 200-seat theatre, and a four-screen multiplex cinema, with restaurants. The mix and quality of housing is extensive and the Rural Renewal Scheme (1999-2006) has ensured that a steady supply of residential development has come about. Longford town has a decentralised government department which employs approximately 300 people with plans for a further 160 to be employed at the Irish Prison Service's new headquarters in the Lisamuck area of the town. Longford's local army barracks employs approximately 180 soldiers, many of whom are involved in UN peace-keeping duties.

Longford's main industries are food production, sawmills, working, generator retailing, cable making and the production of medical diagnostics. It is the major services centre for the county as well as the location of the Department of Social Welfare and the Irish Prison Service. The town is also a local commercial centre, with many retail outlets including multiples such as Tesco, Argos and , German s, and and Irish retail outlets such as and Penneys. It is the town of the . Its cathedral, dedicated to , the founder of the , was designed by architect John Benjamin Keane, who also designed St. Francis Xavier's Church on Gardiner Street in Dublin.

The town has a wide range of sports clubs and facilities including the , rugby and tennis clubs, an Eircom Premier League soccer club (for 8 years although relegated last season), two indoor swimming pools, an extensive gym and a 17-hole golf course. A new swimming pool was opened in Longford in 2007.

The sport with most support in County Longford is . The headquarters of the Longford Gaelic Athletic Association is located in Pearse Park in Longford Town, with a ground capacity of around 11,000. The Longford Gaelic football team has been relatively unsuccessful at national level, in large part reflecting the county's small population size - although it succeeded in winning a Leinster title at Senior level in 1968 and a National League title in 1966. The minor (under-18) Longford county team won the Leinster title in 2002 and their teams at under-21 level have reached several Leinster finals over the last few years (including 2006). The major boys' secondary school in Longford town, , also has a long tradition in secondary schools' football (known as Colleges A), winning 29 Leinster and 4 All-Ireland titles (in the Hogan Cup). At one stage, St. Mel's College had won more Leinster titles than all of the other Leinster colleges put together. The main local GAA Club in Longford is Longford Slashers, based in Longford town, who have won more Senior County Championships than any other team in the county (20, Fr. Manning Gaels are second with 15). The club's performance has dipped in the last few years but a recent resurgence led by manager John Murphy, has brought Slashers back to the top of Longford GAA. They were runners up to Abbeylara in the 2006 County Final and are favourites for the 2007 crown after a number of strong appearances.

Longford town itself has a strong tradition in soccer, the game being introduced in the late 19th century. The town was a military base garrison during British rule. Longford Town football club was founded in 1924 and was elected to the League of Ireland in 1984. The first Longford town football club team to play in the League of Ireland featured Jimmy Savage, Zac Hackett and Liam Madden. In the 1950s and 60s, Longford boasted such players as Willie Browne (UCD and Bohemian FC) who won 3 full international Republic of Ireland caps and captained Bohemian FC for 3 consecutive seasons,he made 177 appearances for Bohs in all competitions scoring 20 goals, Lal Donlon (Longford town and Arsenal), Mel 'Garrincha' Mulligan, John 'Hooky' O'Connor and the legendary Jimmy Clarke. Jimmy Clarke is arguably Longford's most famous football player to date. The Longford Town football club ground is at , in the townland of , to the west of the town, on the Road. Previously, the club was based in the north of town. The Longford Town football club has had notable success in recent years, twice winning the , in 2003 and 2004, and competing in the as a result against n, and Welsh opposition, though without success.

For golfers, Longford has an extensive parkland course. Also within a 50 km (30 mi) radius of the county, one can play quality championship courses such as the -designed , and the .

Longford is represented in in the National League by the [http://www.longfordfalcons.com Longford Falcons] . The club has had numerous Leinster and national titles won at the junior level. The club is based at the Mall Sports Complex, in the east of the town.

Longford town also hosts a rugby club, [http://www.longfordrugby.com/index.php Longford RFC] , whose grounds are located at Demesne, in the north of the town, and who participate in Leinster junior leagues, as well as a 25-metre swimming pool located at the Market Square, in the centre of the town, and another swimming pool located in the LIFE Health And Fitness gym on Richmond Street.

St. Mel's College [http://www.stmelscollege.ie] is the oldest and best-known of these schools, being founded approximately 150 years ago by the as a diocesan seminary to train students for the priesthood. While the school only briefly functioned as a seminary, it served for many years as a boarding school, while also admitting day students. The boarding school was discontinued after 2000 and the school is now only a day school, with the largest student enrollment in county Longford. The College, known locally as "Mel's", is best-known for its strict rules of conduct and its success on a national level with , athletics, soccer, and Rugby.

The Visitor Centre is located near to Longford, in Kenagh. The Centre houses an bog road which was built in the year 148 BC across the boglands in proximity to the . The oak road is the largest of its kind to have been uncovered in Europe and was excavated over the years by Professor Barry Raftery of University College Dublin. Inside the building, an 18 metre stretch of preserved road is on permanent display in a specially designed hall with humidifiers to prevent the ancient wood from cracking in the heat. and the Heritage Service have carried out conservation work on the surrounding bog to ensure that it remains wet and that the buried road is preserved. There are other historical artifacts and some exhibits at the centre.

St. Mel's Cathedral in the town features several stained glass windows by Harry Clarke. These include one of his earliest works "The consecration of St. Mel as Bishop of Longford" which was exhibited at the RDS Annual Art Industries Exhibition in 1910, where it received second prize. It was also exhibited at The Arts and Crafts Society of Ireland fourth exhibition in the same year.

There are a number of located around Longford.

The mother of actor , , was born in Colmcille Parish, County Longford, Ireland. Gibson's first name comes from the 5th-century Irish saint, Mel, founder of the diocese of Ardagh (which contains most of his mother's native county), while his second name, Colmcille, also linked to an Irish saint, is the name of the parish in County Longford where Anne Reilly was born and raised. [, "" film critic, interviewed on Radio 1's "This week" programme, .]