The Society of Saint-Sulpice (Latin: Societas Presbyterorum a S. Sulpitio) is a Catholic Society of Apostolic Life named for Eglise Saint-Sulpice, Paris, in turn named for St. Sulpitius the Pious. Typically, priests become members of the Society of St. Sulpice only after ordination and some years of pastoral work. Uniquely, Sulpicians retain incardination in their own dioceses even after joining the society. The purpose of the society is mainly the education of priests and to some extent parish work. As their main role is the education of those preparing to become members of the presbyterate, Sulpicians place great emphasis on the academic and spiritual formation of their own members, who commit themelves to undergoing lifelong development in these areas.

The Society was founded in Paris by Jean-Jacques Olier (1608–1657), an exemplar of the French school of spirituality. He was pastor of the Church of Saint-Sulpice in Paris in 1642 for the purpose of educating priests. The Sulpician seminaries, above all the one in Paris, were famed for their solid academic teaching and high moral tone. In the 18th century, they were fashionable, attracting the sons of the nobility and producing a large percentage of the French Church's hierarchy.

The Sulpician Society is divided into three provinces: France, Canada and the United States of America. The provinces in North America were created chiefly by priests and students who left the turmoil of France after its revolution. 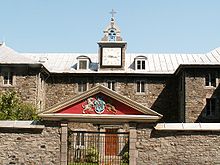 The Sulpicians played a major role in the founding of the Canadian city of Montréal, where they engaged in missionary activities, trained priests and constructed the Saint-Sulpice Seminary.

In 1657 Olier, shortly before his death, sent four priests (Gabriel de Queylus, Souart, d'Allet, and Galinier) to take over from the Jesuit Fathers.[1] As the new feudal lords of Montréal, the order granted easy terms to settlers. They tried to encourage settlement of villages around the city as a first line of defense against attacks by native peoples.[2]

At the same time the Sulpicians strongly encouraged the Mohawk to move to a new settlement west to the Ottawa River, which came to be called Kanesatake. It was their former hunting ground. In 1716 the French king granted a large parcel of land to the Mohawk north of the Ottawa River, and a smaller adjacent grant to the Sulpicians. The latter had the grant changed so that all the land was in their name, depriving the Mohawk of their own place.[3]

In 1794 after the French Revolution, twelve Sulpicians fled persecution by the National Convention and emigrated to Montréal, Quebec. According to the Catholic Encyclopedia, the Sulpicians of Montréal would have died out had not the English Government opened Canada to the priests persecuted during the French Revolution. Under the previous French Colonial government, the King of France had granted the Sulpician Society large parcels of land in Montreal.

After lengthy disputes, in 1840 the British Crown recognized the possessions of the Sulpicians, though these were coveted by English business agents. This enabled the Sulpicians to keep all their holdings and continue their work for the Church and society. Included in their vast land holdings was the property through which the Lachine Canal was built in 1825. After convincing the government to designate the property on the banks of the canal as industrial zones, the Society began selling off parcels for industrial development at enormous profits, which helped finance their good works.

Canadian Sulpicians may be found operating in seminaries in Montreal and Edmonton. In 1972 the Canadian Province established a Provincial Delegation for Latin America, based in Bogotá, Colombia. In Latin America, the Society functions in Brazil (Brasilia and Londrina) and Colombia (Cali, Cucuta and Manizales). They have also served in Fukuoka, Japan since 1933.

The provincial house is based in Paris where the Sulpicians minister in the famous parishes of Saint Sulpice and Notre Dame de Pauvres. They also serve in several French seminaries as well as in Viet Nam and French-speaking African nations.

On 10 July 1791, four Sulpicians established the first Catholic institution for the training of clergy in the new nation, St. Mary’s Seminary in Baltimore. They were the Abbés Francis Charles Nagot, Anthony Gamier, Michael Levadoux, and John Tessier, who had fled the French Revolution.[4] Purchasing the One Mile Tavern then on the edge of the city, they dedicated the house to the Blessed Virgin. In October they opened classes with five students whom they had brought from France, and hereby established the first community of the Society in the nation.

In March, 1792 three more priests arrived, Abbé Chicoisneau, Abbé John B. David and Abbé Benedict Joseph Flaget. Two seminarians arrived with them, Steven T. Badin and another named Barret. They were joined in June of that same year by the Abbés Ambrose Maréchal, Gabriel Richard and Francis Ciquard. Many of these early priests were sent as missionaries to remote areas of the United States and its territories. Flaget and David founded the Catholic Seminary of St. Thomas, at Bardstown, Kentucky. It was the first seminary west of the Appalachians. Their St. Thomas Catholic Church, built there in 1816, is the oldest surviving brick church in Kentucky. In 1796, Louis William Valentine Dubourg arrived and became the president of Georgetown University. Later he became the first bishop of the Louisiana Territory.

A decade later, Dubourg was instrumental in the transfer from New York City of the widow and recent convert Elizabeth Seton, who had been unsuccessful in her efforts to run a school, in part to care for her family. With his encouragement, she and other women drawn to the vision of caring for the poor in a religious way of life came to found the first American congregation of Sisters in 1809. The Sulpicians served as their religious superiors until 1850, when the original community located there chose to merge with another religious institute of Sisters.

The Society helped to found and staff for a time St. John's Seminary, part of the Archdiocese of Boston (1884–1911). In that same period, for a brief time they also staffed St. Joseph Seminary, serving the Archdiocese of New York (1896–1906). The Sulpicians who staffed that institution chose to leave the Society and become part of the archdiocese. Among their number was Francis Gigot.

In 1898, at the invitation of the Archbishop of San Francisco, Patrick William Riordan, the Sulpicians founded what continues to be their primary institution on the West Coast, Saint Patrick Seminary, Menlo Park, California. From the 1920s until about 1971, the Society operated St. Edward Seminary in Kenmore, Washington. The grounds now form Saint Edward State Park and Bastyr University. For a brief period in the 1990s, the Sulpicians were also involved in teaching at St. John's Seminary in Camarillo, the college seminary for the Archdiocese of Los Angeles.

According to the Annuario Pontificio, 330 priests were members of the society in 2004.