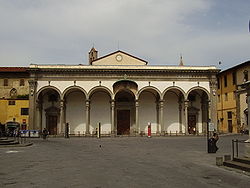 The Servite Order is one of the five original Catholic mendicant orders. Its objects are the sanctification of its members, preaching the Gospel, and the propagation of devotion to the Mother of God, with special reference to her sorrows. The members of the Order use O.S.M. (for Ordo Servorum Beatae Mariae Virginis) as their post-nominal letters. The male members are known as Servite Friars or Servants of Mary. 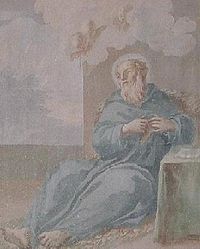 Amadeus of the Amidei (d. 1266), one of the seven founders of the Servite Order.

Alexis Falconieri (d. 1310), one of the seven founders of the Servite Order.

The city of Florence bore the seven youths who formed the nucleus of the order: Buonfiglio dei Monaldi (Bonfilius), Giovanni di Buonagiunta (Bonajuncta), Amadeus of the Amidei (Bartolomeus), Ricovero dei Lippi-Ugguccioni (Hugh), Benedetto dell' Antella (Manettus), Gherardino di Sostegno (Sostene), and Alessio de' Falconieri (Alexius); they belonged to seven patrician families of that city, and had early formed a confraternity of laymen, known as the Laudesi, or Praisers of Mary. They are also known as the Seven Holy Founders.

While engaged in the exercises of the confraternity on the feast of the Assumption, 1233, they witnessed a vision of the Blessed Virgin Mary advising them to withdraw from the world and devote themselves entirely to eternal things. They followed this advice, and established themselves close to the convent of the Friars Minor at La Camarzia, a suburb of Florence. Desiring stricter seclusion than that offered at La Camarzia, they withdrew to Monte Senario, eleven miles north of Florence. Here the Blessed Virgin again appeared to them, conferred on them a black habit, instructed them to follow the Rule of St. Augustine and to found the order of her servants (April 15, 1240). The brethren elected a superior, took the vows of obedience, chastity, and poverty, and admitted associates. 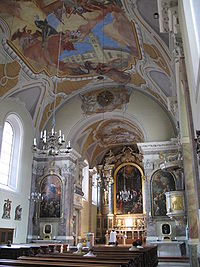 In 1243 Saint Peter of Verona (St. Peter Martyr), Inquisitor-General of Italy, recommended the new foundation to the pope, but it was not until March 13, 1249, that the first official approval of the order was obtained from Cardinal Raniero Capocci, papal legate in Tuscany. About this time St. Bonfilius obtained permission to found the first branch of the order at Cafaggio outside the walls of Florence. Two years later (October 2, 1251) Pope Innocent IV appointed Cardinal Guglielmo Fieschi first protector of the order.

The next pontiff, Pope Alexander IV, favored a plan for the amalgamation of all institutes following the Rule of St. Augustine. This was accomplished in March 1256, and about the same time a Rescript was issued confirming the Order of the Servites as a separate body with power to elect a general. Four years later a general chapter was convened at which the order was divided into two provinces, Tuscany and Umbria, the former of which St. Manettus directed, while the latter was given into the care of St. Sostene. Within five years two new provinces were added: Romagna and Lombardy.

After St. Philip Benizi was elected general of the order on June 5, 1267, which had long been the object of unjust attack from jealous enemies, entered into the crisis of its existence. The Second Council of Lyons in 1274 put into execution the ordinance of the Fourth Lateran Council, forbidding the foundation of new religious orders, and absolutely suppressed all mendicant institutions not yet approved by the Holy See. The aggressors renewed their assaults, and in the year 1276 Pope Innocent V in a letter to St. Philip declared the order suppressed. St. Philip proceeded to Rome, but before his arrival there Innocent V had died. His successor lived but five weeks. Finally Pope John XXI, on the favourable opinion of three consistorial advocates, decided that the order should continue as before. The former dangers reappeared under Pope Martin V (1281), and though other popes continued to favour the order, it was not definitively approved until Pope Benedict XI issued the Bull "Dum levamus" (February 11, 1304). Of the seven founders, St. Alexis alone lived to see their foundation raised to the dignity of an order. He died in 1310.

We must here make mention of St. Peregrine Laziosi (Latiosi), whose sanctity of life did much towards increasing the repute of the Servite Order in Italy. Born at Forlì in 1265, the son of a Ghibelline leader, Peregrine, in his youth, bitterly hated the Church. He insulted and struck Philip Benizi, who, at the request of Martin V, had gone to preach peace to the Forlivese. Peregrine's generous nature was immediately aroused by the mildness with which St. Philip received the attack and he begged the saint's forgiveness. In 1283 he was received into the order, and so great was his humility it was only after much persuasion he consented to be ordained a priest. He founded a monastery in his native Forlì, where he devoted all his energies to the restoration of peace. His humility and patience were so great that he was called by his people a second Job. He died in 1345. His body remains incorrupt to the present day. He was canonized by Pope Benedict XIII in 1726, and his feast is celebrated on April 30.

Pope Boniface IX granted the Servites the power to confer theological degrees on January 30, 1398, and the order established the Marianum in Rome.[1]

The new foundation enjoyed considerable growth in the following decades. Even in the thirteenth century there were houses of the order in Germany, France, and Spain. Early in the fourteenth century the order had more than one hundred convents including branch houses in Hungary, Bohemia, Austria, Poland, and Belgium; there were also missions in Crete, the Philippines (St. Peregrine-Philippine Vicariate) and India.

The disturbances during the Protestant Reformation caused the loss of many Servite convents in Germany, but in the south of France the order met with much success. The Convent of Santa Maria in Via (1563) was the second house of the order established in Rome; San Marcello al Corso had been founded in 1369. Early in the eighteenth century the order sustained losses and confiscations from which it has scarcely yet recovered. The flourishing Province of Narbonne was almost totally destroyed by the plague which swept Marseilles in 1720. In 1783 the Servites were expelled from Prague and in 1785 Emperor Joseph II desecrated the shrine of Maria Waldrast. Ten monasteries were suppressed in Spain in 1835. A new foundation was made at Brussels in 1891.

After the Risorgimento in 1870, the government of Italy closed the Marianum along with many other papal institutions. The institute was re-founded as the College of Sant Alessio Falcioneri in 1895.

At this period the order was introduced into England and America chiefly through the efforts of Fathers Bosio and Morini. The latter, having gone to London (1864) as director of the affiliated Sisters of Compassion, obtained charge of a parish from Archbishop Manning in 1867. His work prospered: besides St. Mary's Priory at London, convents were opened at Bognor Regis (1882) and Begbroke (1886). In 1870 Fathers Morini, Ventura, Giribaldi, and Brother Joseph Camera, at the request of Bishop Joseph Melcher of Green Bay, Wisconsin, took up a mission in America, at Neenah. Father Morini founded at Chicago (1874) the monastery of Our Lady of Sorrows. A novitiate was opened at Granville, Wisconsin, in 1892. The American province was formally established in 1908.

In 1910 the order numbered 700 members in 62 monasteries, of which 36 were in Italy, 17 in Austria-Hungary, 4 in England, 4 in North America (at Chicago, Illinois; St. Louis, Missouri; Milwaukee, Wisconsin (Superior); and Denver, Colorado), and 1 in Brussels, Belgium.

Pope Pius XII, through the Congregation of Seminaries and Universities, elevated the Marianum to a pontifical theological faculty on 30 November 1950.[1]

After the Second Vatican Council, the order renewed its Constitutions starting with its 1968 general chapter at Majadahonda, Madrid, a process which was concluded in 1987. In the same year, Prior General Michael M. Sincerny oversaw the creation of the International Union of the Servite Family (UNIFAS).[2] 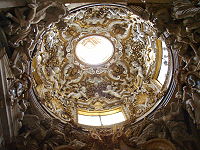 In common with all religious orders strictly so called, the Servites make solemn vows of poverty, chastity, and obedience. The particular object of the order is to sanctify first its own members, and then all men through devotion to the Mother of God, especially in her desolation during the Passion of her Divine Son.

The Servites give missions, have the care of souls, or teach in higher institutions of learning. The Rosary of the Seven Dolors is one of their devotions, as is also the Via Matris.

The fasts of the order are Advent, Lent, and the vigils of certain feasts.

All offices in the order are elective and continue for three years, except that of general and assistant-generals which are for six years.

Canonized Servite saints are: St. Philip Benizi (feast day on August 23), St. Peregrine Latiosi (April 30), St. Juliana Falconieri (June 19). The seven founders of the order were canonized in 1888, and have a common feast day on 17 February. The date first assigned to this feast day was 11 February, the anniversary of the canonical approval of the order in 1304. In 1907 this date was assigned to the celebration of Our Lady of Lourdes and the feast day of the Seven Holy Founders was moved to 12 February. In accordance with liturgical tradition, the date was changed in 1969 to the anniversary of the death of one of them, Alexis Falconieri, which occurred on 17 February 1310.[3]

Connected with the first order of men are the cloistered nuns of the second order, which originated with converts of St. Philip Benizi. These sisters have monasteries in Spain, Italy, England, the Tyrol, and Germany.

The Mantellate, a third order of women founded by Juliana Falconieri, have houses in Italy, France, Spain, England, and Canada. In the United States they are to be found in the dioceses of Sioux City, Omaha, and Belville.

There is also a third order for seculars, as well as a confraternity of the Seven Dolours, branches of which may be erected in any church.

Mariology and the Marianum

The Pontifical institute Marianum which is now one of the leading centers of Mariology traces its roots to the Servite Order. In 1398 Pope Boniface IX, granted the order the right to confer theological degrees and in 1895 the school reopened under the name Sant Alessio Falcioneri.

In 1939 Father Gabriel Roschini OSM founded the journal Marianum and directed it for thirty years. In 1950, he founded the Marianum Theological Faculty, which, on December 8, 1955 became a Pontifical faculty by Decree Coelesti Honorandae Reginae of the Sacred Congregation of Seminaries and Universities under the authority of Pope Pius XII.[4] 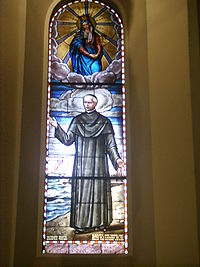 A few of the most distinguished members are here grouped under the heading of that particular subject to which they were especially devoted; the dates are those of their death. Ten members have been canonized and several beatified.

Felicianus Capitoni (1577), who wrote an explanation of all the passages misinterpreted by Martin Luther;

Music: Alexander Mellino (1554), choirmaster at the Vatican; Elias Zoto, John Philip Dreyer (1772); Paul Bonfichi, who received a pension from Napoleon I Bonaparte for his musical compositions

Plastic arts; Arsenius Mascagni and Gabriel Mattei, painters; Giovanni Angelo Montorsoli(Angelus Montursius) (1563), architect and sculptor, among whose works are the Neptune of Messina, the arm of Laocoon in the Vatican, and the Angels on the Ponte Sant' Angelo.