Originally, the Latin word consistorium meant simply 'sitting together', just as the Greek syn(h)edrion (of which the Biblical sanhedrin was a corruption).

In the Roman empire, it was specifically applied to a formal meeting of the comites consistoriales, i.e. those members of the Emperor's court with the title of Comes (the translation count is rather confusing) who were assigned—and this conferred the highest rank amongst Comites—to advise him in official, important matters, such as drafting bills and other written decisions, rather like the privy council of a feudal king. As the senate—in law still retaining the highest constitutional position, since the republic was never formally ended—lost most of its political importance, being reduced almost to a rubber stamp as a single-party state's parliament usually is, they stepped in as an official alternative power to the throne, but real power could just as well lie mainly elsewhere, depending on the imperial favor and personal machinations

The consistory is a formal meeting of the Sacred College of Cardinals of the Roman Catholic Church, except when convened to elect a new pope (in which case the meeting is called a conclave, and special rules of membership, procedure, and secrecy apply). Consistories are held in Vatican City for taking care of the business of the college, which usually involves advising the Pope on important matters concerning the church.

Consistories are of three kinds: secret or ordinary, public or extraordinary, and semi-public.

Those new cardinals present are presented with their rings, zucchetti (small skullcaps), and birette (four-cornered silk hats) by the Pope. Formerly they also received an elaborate broad-brimmed tasseled hat, the galerum rubrum, at the ceremony, but Pope Paul VI abolished this in 1967 and those cardinals who want these obtain them privately from a maker in Rome.

The zucchetto, the biretta, and the galerum rubrum are all scarlet, the distinctive color of cardinals' vestments. When a diocesan cardinal dies, his galerum rubrum is suspended from the ceiling of his cathedral.

At the consistory cardinals are generally assigned titular churches in the diocese of Rome, though Pope Paul VI abolished their functional involvement in the governance of these churches; the cardinals formally "take possession" of these churches at a later date. 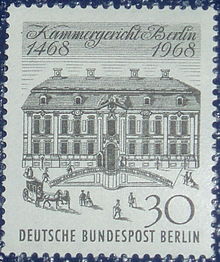 The old-Prussian March of Brandenburg Consistory resided in the 1735-built Collegienhaus, sharing it till 1913 with the Kammergericht, and the official apartment for the consistorial president until its destruction in an US air raid on February 3, 1945. Today's reconstructed edifice is part of the Jewish Museum Berlin.

In Scandinavia, the word consistory (Konsistorium etc.) has been used for the chapter of a cathedral.

In the Lutheran territories of imperial immediacy in the Holy Roman Empire episcopal offices were not staffed anymore and the secular government assumed the function of the bishop. In the 16th and 17th c. most governments of Lutheran territories pooled the administrative and religious affairs in a distinct office called the consistory. While Protestantism often still did not form a separate legal entity, with state and Protestantism not being separated, the consistory turned out to be the oldest body of many modern church bodies, which developed as independent legal entities in the 18th and 19th c. With territorial changes (heritage and conquest) many territories became multi-denominational. 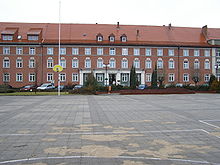 The Building of the former Consistory (est. in 1923) of the old Prussian Ecclesiastical Province of Posen-West Prussia in today's Piła, now the administrative centre of an oil and gas drilling company.

The consistory, being rather a governmental than a religious office, was then often competent for all (Protestant) denominations (e.g. in Bremen-Verden) or even all religions (e.g. in Prussia, see Evangelical Church in Prussia) in the respective territory. The rather governmental character of the consistory is the reason why the term was given up in many church bodies after the separation of state and religion. In Germany today a single Protestant church body, the Evangelical Church of Berlin-Brandenburg-Silesian Upper Lusatia, uses the term consistory for its administrative office. Consistories used to be and still are usually staffed with clerics and jurists. Today they are usually led by a consistorial president, a laymen (usually a jurist), historically General Superintendents, clerics, presided them. The other members bear the title (Upper) Consistorial Councillor (German: (Ober-)Konsistorialrat).

Also the Evangelical Lutheran Church of Latvia uses the term consistory for its central administrative office.

In the Reformed churches, a Consistory is a congregation's governing body of elected officials that include the Elders and the Deacons, thus making the body similar to the Session in Presbyterian churches.

In Jewish usage, a consistory is a body governing the Jewish congregations of a province or of a country; also the district administered by the consistory. The Jews in countries under French influence made use of the term in the beginning of the nineteenth century, when the movement for political emancipation demanded the creation of a representative body which could transact official business with a government in the name of the Jews, and when the desire for reform among the educated classes demanded the creation of a body vested with authority to render religious decisions.

The word consistory (konsistorium) is also used in the sense of "university board" at some universities in Germany, Scandinavia and Finland (konsistori). In other countries another august assembly lends an alternative name to an equivalent body, e.g. senat in Belgium.