Salesians of Don Bosco
This article is about the religious order. For schools bearing the name, see Salesian School (disambiguation).

The Salesians of Don Bosco (or the Salesian Society, originally known as the Society of St. Francis de Sales) is a Roman Catholic religious order founded in the late nineteenth century by Saint John Bosco in an attempt, through works of charity, to care for the young and poor children of the industrial revolution. The Salesians' charter describes the society's mission as "the Christian perfection of its associates obtained by the exercise of spiritual and corporal works of charity towards the young, especially the poor, and the education of boys to the priesthood".[1] The order is named for St. Francis de Sales, an early-modern bishop of Geneva. 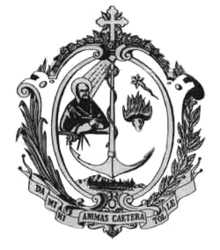 In 1845 Don John Bosco ("Don" being a traditional Italian honorific for a priest) opened a night school for boys in Valdocco, now part of the municipality of Turin in Italy. In the coming years, he opened several more schools, and in 1857 drew up a set of rules for his helpers, which became the Rule of the Society of St. Francis de Sales, which Pope Pius IX approved definitively in 1873. The order grew rapidly, with houses established in France and Argentina within a year of the society's formal recognition. The order's official print organ, the Salesian Bulletin, was first published in 1877. Over the next decade, the Salesians expanded into Austria, Britain, Spain, and several countries in South America. The death of Don Bosco in 1888 did not slow the order's growth, and by 1911 the Salesians were established throughout the world, including Colombia, China, India, South Africa, Tunisia, Venezuela and the United States. The society continues to operate worldwide; in 2000, it counted more than 20,000 members in 2,711 houses. It is the third largest missionary organization in the world.[2]

Logo of the Society

New logo of the Salesians of Don Bosco. It contains elements from German and Brazilian Provinces.

The logo is designed with the central theme DON BOSCO AND THE SALESIANS WALKING WITH THE YOUNG THROUGH THE WORLD.

The logo of the Salesians of Don Bosco is made up of two superimposed images: in the background a stylised “S” (Salesians) in white is formed within a sphere like a globe marked to the right and left by two cuttings between the hills/dunes The second image is in the centre of the globe bridging the “S” road. This is an arrow pointing upwards resting on three perpendicular legs on top of which are three closed circles making a stylised image of three people: the first of these in the midde and taller than the others is the point of the arrow, and the other two beside it appear as it were to be embraced by the central figure. The three stylised figures with the arrow pointing upwards can also be viewed as a simple dwelling with a sloping roof (the arms) and with pillars holding it up (the bodies of the three people).

Various Elements of the New Logo

Relation to the Traditional Coat of Arms

The new logo is the result of combining two logos already established for years in some parts of the Congregation: the German logo and the Brazilian logo.

The idea of combining the two came out of suggestions from an enquiry about the new logo conducted throughout the Congregation and from contributions by the General Council.

The combination, besides profiting from the mutual enrichment of the elements, is intended to be an expression of communion and of intercultural dialogue.

The artistic work of combining the two was carried out by the designer Fabrizio Emigli, from the Litos Company, in Rome.

Map showing the regional organization of the Salesians of Don Bosco, dotted with the location of the headquarters of Salesian provinces and vice-provinces.

Salesian communities primarily operate shelters for homeless or at-risk youths; schools; technical, vocational, and language instruction centers for youths and adults; and boys' clubs and community centers. In some areas they run parish churches. Salesians are also active in publishing and other public communication activities, as well as mission work, especially in Asia (Siberia - in the Yakutsk area), Africa, and South America (Yanomami). The Salesian Bulletin is now published in fifty-two editions, in thirty languages.

In the 1990s Salesians launched new works in the area of tertiary education, and today have a network of over 58 colleges and universities. The official university of the Salesian Society is the Salesian Pontifical University in Rome.

The women's order is known as the Salesian Sisters of Don Bosco or the Daughters of Mary Help of Christians.

Visitationist sisters, members of the Order of the Visitation of Holy Mary, are also sometimes called Salesian Sisters, in honor of one of their founders, Saint Francis de Sales. However, the two societies are not the same and their membership does not overlap.

Based on Catholic Encyclopedia entry, abbreviated and rewritten for NPOV.