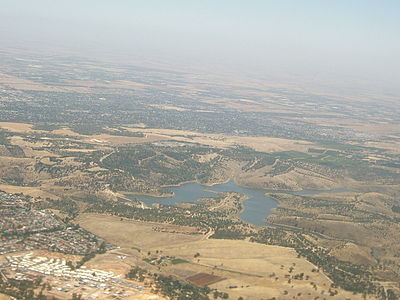 Looking northwest over Greenwith and the Little Para Reservoir from an aeroplane flying west down the River Torrens valley.
The dark area on the far side of the reservoir are the suburbs of the City of Playford. In the background are the outer northern suburbs of Adelaide, and the northern Adelaide Plains of the Gawler River.

The City of Playford is a Local Government Area of South Australia, located in Adelaide's northern suburbs. The name 'Playford' comes from the recognition of Sir Thomas Playford, who played a part in the development of the area, and was South Australia's premier from 1938-1965. The City of Playford is home to a number of South Australia's largest industries and employers, such as Exide Batteries, General Motors Holden, the Defence Science and Technology Organisation and the adjacent RAAF Base Edinburgh. Its major business district is Elizabeth.

Prior to the 1950s, most of the area surrounding today's suburbs of Munno Para and Elizabeth were farming estates. After the end of the Second World War and the accompanying shortage of materials, the state government decided that South Australia needed to grow and become an industrialized state. A "satellite city" was planned for the Elizabeth area, and the South Australian Housing Trust initiated a housing development program in the area, with a purchase of 3,000 acres (1,200 hectares) of land. The City of Elizabeth was formed on 16 November 1955, being named after Queen Elizabeth II, who visited the city in 1963.

Despite being a major industrial centre in Adelaide, the City of Playford has suffered economically since the 1970s and carries a higher rate of disadvantage than other areas in Adelaide. This has occurred because of falling migration rates in the 1970s, higher rates of unemployment (as much as 30% in some suburbs), and the various recessions that Adelaide has suffered through the years.[citation needed]

Since 1997, the council has planned and built a number of new housing developments aimed at attracting young working couples and families in an attempt to rejuvenate the area. A new Civic Centre including a council chamber, library, theatre and function centre has been built. Other notable developments are the new library in Smithfield, and the revamp of the Elizabeth shopping centre, including an 8-screen cinema complex.[citation needed]

In[when?] it was announced that A$1 billion would be allocated to rejuvenate the Peachey Belt. Known as the Playford North Urban Regeneration project, it is expected that the population of the area will increase from 13,000 residents to 30,000 in 15 years and will involve the demolition of most Housing SA homes.[citation needed] The project has since been renamed "Playford Alive".[3][4]

"As part of the 30 year Plan for greater Adelaide, significant growth and investment is pouring into Playford from business. Rapidly increasing employment coupled with new land releases has driven population growth and improved living standards.[citation needed]

The council elected in 2010, lead by Mayor Glenn Docherty, has started the creation of Playford Health Precinct around the Lyell McEwin Hospital.[5]

The SCT Rail Freight Terminal, opened in January 2011,[6] will provide for goods and services to be transported by road and rail more efficiently and quickly. Playford is to become the logistical and advanced distribution capital of South Australia.[citation needed]

The A$750 million expansion within the RAAF Base Edinburgh, including facilities for 7th RAR (Mechanized Army Battalion), is due for completion in 2011.[7]

The council is working with the South Australian Government to release 1,000 hectares of industrial land in the Greater Edinburgh Parks Region, with the intention of attracting and supporting 38,000 jobs in the northern part of Adelaide.[8][9]

The council is also involved in discussions regarding expansion of the Elizabeth City Centre, (the major shopping precinct in Playford), onto 30-40 hectares of land to the west of the train line.[10]

Docherty also aims to make Elizabeth the second CBD of Adelaide, as new growth to Playford will transform the commercial centre from low density commerical and housing to multiple story mixed use commercial and residential developments.[11]

A number of sports teams call the City of Playford home, including:

Notable people who have lived within the City of Playford include: