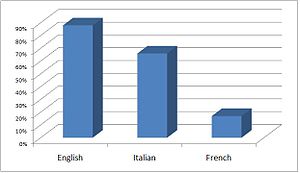 The most commonly known foreign languages (including English as a second language) in Malta, 2005. According to Eurostat[2]

The current national language of Malta is Maltese, which along with English, is one of the official languages.

Having been governed by many different countries in the past, the Maltese population carry linguistic imprints from many places. Almost 100% of Maltese people can speak Maltese, 88% of the Maltese people can speak English, 66% can speak Italian, and nowadays more than 17% of the Maltese speak French.[3] This shows a recent increase in the fluency of languages, since in 1995, only 98% of the population spoke Maltese, 76% English, 36% Italian, and 10% French. Surprisingly, it also shows an increase in Italian fluency compared to when Italian was an official language of Malta.[4]

French, German and Spanish are the main other languages studied at secondary school.[5] 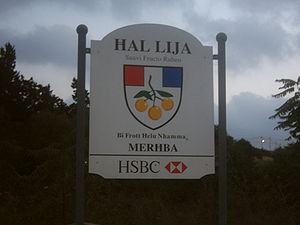 A Maltese-language welcome sign to the village of Lija, making use of the letter Ħ, unique to Maltese.

Maltese is the national language of the Maltese people, and one of the official languages of Malta and the European Union. It is a Semitic language derived from Siculo-Arabic; however a majority of vocabulary comes from Sicilian and Italian, as described by Maltese linguist May Butcher. 52% of Maltese words are of Romance origin, a result of significant influence from Italy (in particular Sicily) and, to a lesser extent, France. Malta holds the distinction of being the only country in Europe with a historically Semitic language. The Maltese language is written with a modified Latin Alphabet which includes the letters ż, ċ, ġ, ħ, and għ.

Various localities have accents and dialects divergent from standard Maltese. There has been a decline in the number of dialectal speakers, mostly because of exposure to standard Maltese in the media and the institutionalisation of education. The standard language also shows a more pronounced Italicization and Anglicization of the language.[5]

Before independence in 1964, Malta was a British possession, and a result of this is that English is still an official language, with government business being carried out in both English and Maltese. Most Maltese learn English in school, this being obligatory in most cases. Secondary and tertiary education are given exclusively in English. Today, 88% of Malta's population speak English. Aside from Maltese, English is the only other official language of the country. Although standard English is official, the variety of English commonly spoken in Malta is heavily influenced by Italian, not only in vocabulary (most commonly by pronouncing English words of Franco-Latin origin in an Italian style) but extending to phonology, with the English being heavily accented; however, Received Pronunciation remains standard amongst Maltese individuals of a certain socioeconomic bracket. 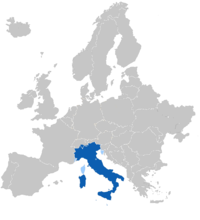 Before the 1930s, Italian was the official language of Malta. Italian irredentists and Italian Maltese wanted to promote its use throughout Malta for plans to re-unify it to Italy (Malta was part of the Kingdom of Sicily up to 16th century). Although only the rich could speak Italian, with Maltese being generally spoken by those less well off, Italian was regarded as the official language.

Today, 66% of the Maltese population can speak Italian, and 2% of the population "prefers" to use it in day to day conversation.[3][5] Although Italian has since been exchanged for English as the official language, it is still used and is spoken commonly in certain professional workplaces. The percentage of speakers today, 66%, is in fact much greater than when the language was actually official, in 1931, when only 14% spoke it.[5]

An interesting fact is that a large number of Maltese learn Italian through Italian television, mainly Mediaset and RAI, as their broadcasts reach the Maltese Islands.[4] In addition to this, many products, services, and businesses that reach Malta are Italian, with Malta being too small on its own to produce some things, so many people learn Italian like this.

In addition to the Italian language itself being spoken in Malta, 30% of Maltese vocabulary is of Sicilian and Italian origin. This means that many words in Italian and Maltese are almost interchangeable, and a Maltese conversation typically includes much Italian vocabulary. In this way, the Italian language influences everyday speech.

In addition to Italian, many Maltese generally have some degree of proficiency in French, and quite a few understand or speak Spanish or German, although several other languages are studied too.

The Governmental Circular letter for the school year 2011-2012[6] shows the following language options should be available in schools:

This language is studied for the five years in Secondary School

There are equal numbers of newspapers written in English and Maltese, with none being written in Italian.

Regarding radio, Italian takes the place of English, with radio stations being predominantly in Maltese and Italian, with a few in English too.

The local channels in Malta are broadcast mainly in Maltese and sometimes English. Nonetheless, Malta is supplied with digital stations from around the world as the rest of Europe (meaning Sky, TPS, and others can be seen on Maltese television).

Maltese is not a commonly used language on the internet, with the majority of "Maltese" websites being written in other languages. Out of a survey conducted on 13 Maltese websites, 12 of them were entirely in English, with one being bilingual, but not Maltese.[7]

Possible scenarios for the future of the Maltese language are a subject of speculation among scholars. Dialectal variation of Maltese are in decline while towards a more standardized usage is one current trend. Another is a tendency to adopt influence from English and Italian. There is a perceived language shift towards English amongst the Maltese, with lexological and grammatical patterns in the Maltese language increasingly anglicized.[5] However this absorption of linguistic influences saturates the history of the Maltese language, which remains spoken by almost 100%[5] of the population.