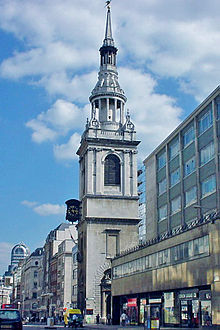 The term Cockney has both geographical and linguistic associations. Geographically and culturally, it often refers to working class Londoners, particularly those in the East End. Linguistically, it refers to the form of English spoken by this group. 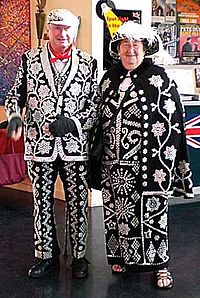 A costume associated with Cockneys is that of the pearly King (or pearly Queen) worn by London costermongers who sew thousands of pearl buttons onto their clothing in elaborate and creative patterns.

The earliest recorded use of the term is 1362 in The vision of William concerning Piers Plowman (Passus VI) by William Langland and it is used to mean a small, misshapen egg, from Middle English coken (of cocks) and ey (egg) so literally 'a cock's egg'.[1] In the Reeve's Tale by Geoffrey Chaucer (circa 1386) it appears as "cokenay",[2] and the meaning is "a child tenderly brought up, an effeminate fellow, a milksop".[1][3][4] By 1521 it was in use by country people as a derogatory reference for the effeminate town-dwellers.[1][5] The term was used to describe those born within earshot of the Bow Bells in 1600, when Samuel Rowlands, in his satire The Letting of Humours Blood in the Head-Vaine, referred to 'a Bowe-bell Cockney'.[6] Traveler and writer Fynes Moryson stated in his work An Itinerary that "Londoners, and all within the sound of Bow Bells, are in reproach called Cockneys."[7] John Minsheu (or Minshew) was the first lexicographer to define the word in this sense, in his Ductor in Linguas (1617), where he referred to 'A Cockney or Cockny, applied only to one born within the sound of Bow bell, that is in the City of London'.[8] However, the etymologies he gave (from 'cock' and 'neigh', or from Latin incoctus, raw) were incorrect. Francis Grose's A Classical Dictionary of the Vulgar Tongue (1785) derives the term from the following story:

A citizen of London, being in the country, and hearing a horse neigh, exclaimed, Lord! how that horse laughs! A by-stander telling him that noise was called Neighing, the next morning, when the cock crowed, the citizen to shew he had not forgot what was told him, cried out, Do you hear how the Cock Neighs?[9][10]

Given the earlier meanings above, this story is probably apocryphal.

An alternative derivation is from the word Cockaigne, a term for a mythical luxurious country, first recorded in 1362.[11] This was then used humorously to refer to London, and over time had a number of spellings: Cocagne, Cockayne, Cocknay and Cockney. The latter two spellings could be used to refer to both pampered children, and residents of London, as to pamper or spoil a child was 'to cocker' him.[12]

The region in which "Cockneys" are thought to reside is not clearly defined. A common view is that in order to be a Cockney, one must have been born within earshot of the Bow Bells.[citation needed] However, the church of St Mary-le-Bow was destroyed in 1666 by the Great Fire of London and rebuilt by Sir Christopher Wren. After the bells were destroyed again in 1941 in The Blitz of World War II, and before they were replaced in 1961, there was a period when by this definition no 'Bow-bell' Cockneys could be born.[13] The use of such a literal definition produces other problems, since the area around the church is no longer residential and the noise of the area makes it unlikely that many people would be born within earshot of the bells anymore,[14] although Guy's Hospital and St Thomas' hospital are both within the defined area covered by the sound of the Bow Bells, suggesting a reasonable number of South London Cockneys continue to be born within the sound of the bells. The closest maternity unit was the East London Maternity Hospital in Stepney which was 2.5 miles from St Mary-le-Bow and was in use from 1884 to 1968.

A study was carried out by the city in 2000 to see how far the Bow Bells could be heard,[citation needed] and it was estimated that the bells would have been heard six miles to the east, five miles to the north, three miles to the south, and four miles to the west. According to the legend of Dick Whittington the bells could once be heard from as far away as Highgate.[15] The association with Cockney and the East End in the public imagination may be due to many people assuming that Bow Bells are to be found in the district of Bow, rather than the lesser known St Mary-le-Bow church. Thus while all East Enders are Cockneys, not all Cockneys are East Enders.

The traditional core districts of the East End are Bethnal Green, Whitechapel, Spitalfields, Stepney, Wapping, Limehouse, Poplar, Clerkenwell, Aldgate, Shoreditch, Millwall, Hackney, Hoxton, Bow and Mile End. "The Borough" to the south of Waterloo, London and Tower Bridge were also considered Cockney before redevelopment all but extinguished the local working class areas, and now Bermondsey is the only Cockney area south of the Thames, although Pearly Kings and Queens can be found as far out as Peckham and Penge. The area north of the Thames gradually expanded to include East Ham, Stratford, West Ham and Plaistow as more land was built upon.

Migration of Cockneys has also led to migration of the dialect. Ever since the building of the Becontree housing estate, the Barking & Dagenham area has spoken Cockney. As Chatham Dockyard expanded during the 18th century, large numbers of workers were moved from the dockland areas of London, bringing with them a "Cockney" accent and vocabulary. Within a short period this famously distinguished Chatham from the neighbouring areas, including the City of Rochester, which had a Kentish accent. In Essex, towns that mostly grew up from post-war migration out of London (e.g. Basildon and Harlow) often have a strong Cockney influence on local speech. However, the early dialect researcher Alexander John Ellis believed that Cockney developed due to the influence of Essex dialect on London speech.[16] In recent years, there has been a move away from Cockney in the inner-city areas of London towards Multicultural London English whereas the eastern outskirts of Greater London have more speakers of Cockney dialect. Today cockney areas are situated in Dagenham, Barking, Romford, Chigwell, Harlow, Tottenham, Enfield, Basildon, Thurrock, Cheshunt, Bexley, Sidcup and Brimsdown.[17][18]

Today, certain elements of Cockney English are declining in usage within the area it is most associated with, displaced by a Jamaican Creole-influenced variety popular among young Londoners (sometimes referred to as "Jafaican"), particularly, though far from exclusively, those of Afro-Caribbean descent.[19]

Nevertheless, the glottal stop, double negatives, and the vocalization of the dark L (and other features of Cockney speech), along with some rhyming slang terms are still in common usage. As cockneys have moved out of London, they have often taken their dialect with them. There are actually more speakers of the Cockney dialect in Essex and parts of Hertfordshire that border Greater London than in Whitechapel, even though the former is not in the traditional Cockney area.

A July 2010 report by Paul Kerswill, Professor of Sociolinguistics at Lancaster University, called Multicultural London English: the emergence, acquisition and diffusion of a new variety, claimed that the Cockney accent will disappear from London's streets within 30 years.[19] The study, funded by the Economic and Social Research Council, said the accent, which has been around for more than 500 years, is being replaced in London by a new hybrid language. "Cockney in the East End is now transforming itself into Multicultural London English, a new, melting-pot mixture of all those people living here who learnt English as a second language", Prof Kerswill said.[19]

Cockney speakers have a distinctive accent and dialect, and occasionally use rhyming slang. The Survey of English Dialects took a recording from a long-time resident of Hackney, and the BBC made another recording in 1999 which showed how the accent had changed.[20][21]

John Camden Hotten, in his Slang Dictionary of 1859, makes reference to "their use of a peculiar slang language" when describing the costermongers of London's East End. In terms of other slang, there are also several borrowings from Yiddish, including kosher (originally Hebrew, via Yiddish, meaning legitimate) and stumm (/ʃtʊm/ originally German, via Yiddish, meaning quiet),[22] as well as Romany, for example wonga (meaning money, from the Romany "wanga" meaning coal),[23] and cushty (from the Romany kushtipen, meaning good). A fake Cockney accent is sometimes called 'Mockney'.

Most of the features mentioned above have, in recent years, partly spread into more general south-eastern speech, giving the accent called Estuary English; an Estuary speaker will use some but not all of the Cockney sounds.[60][61][62] Some of the features may derive from the upper-class pronunciation of late 18th century London, such as the use of "ain't" for "isn't" and the now lost reversal of "v" and "w" (as noted by Dickens regarding Sam Weller/Veller).

The Cockney accent has long been looked down upon and thought of as inferior by many. In 1909 these attitudes even received an official recognition thanks to the report of The Conference on the Teaching of English in London Elementary Schools issued by the London County Council, where it is stated that "[…] the Cockney mode of speech, with its unpleasant twang, is a modern corruption without legitimate credentials, and is unworthy of being the speech of any person in the capital city of the Empire".[63] On the other hand, however, there started rising at the same time cries in defence of Cockney as, for example the following one: "The London dialect is really, especially on the South side of the Thames, a perfectly legitimate and responsible child of the old kentish tongue […] the dialect of London North of the Thames has been shown to be one of the many varieties of the Midland or Mercian dialect, flavoured by the East Anglian variety of the same speech […]".[63] Since then, the Cockney accent has been more accepted as an alternative form of the English Language rather than an 'inferior' one; in the 1950s the only accent to be heard on the BBC was RP, whereas nowadays many different accents, including Cockney or ones heavily influenced by it, can be heard on the BBC.[64] In a survey of 2000 people conducted by Coolbrands in autumn 2008, Cockney was voted equal fourth coolest accent in Britain with 7% of the votes, while The Queen's English was considered the coolest, with 20% of the votes.[65] Brummie was voted least popular, receiving just 2%. This shows that although speaking with a Cockney accent is not considered as bad as in the past, preference towards RP still prevails.

Studies have indicated that the heavy use of South East English accents on television and radio may be the cause of the spread of Cockney English since the 1960s.[66][67][68][69] Cockney is more and more influential and some claim that in the future many features of the accent may become standard.[70]

Studies have indicated that working-class adolescents in areas such as Glasgow have begun to use certain aspects of Cockney and other Anglicisms in their speech,[71] infiltrating the traditional Glasgow patter.[72] For example, TH fronting is commonly found, and typical Scottish features such as the postvocalic /r/ are reduced.[73] Research suggests the use of English speech characteristics is likely to be a result of the influence of London and South East England accents featuring heavily on television.[66][67][68][69]

Th fronting, L vocalization and T glottalization can now be found in every county of England (with L vocalization being largely absent from Northern England),[74][75][76][77][78] whereas before the 1960s the only Cockney feature that was common to all of England, except for much of East Anglia and North East England, was H dropping.[79][80][81]

Synonyms:
Londoner, native or resident of London, Of Cockneys, Cockney-like