This region encompasses the city of Bristol and the counties of Cornwall, Devon, Dorset and Somerset, while Gloucestershire, Herefordshire, Worcestershire and Wiltshire are usually also included, although the northern and eastern boundaries of the area are hard to define and sometimes even wider areas are encompassed. The core area of West Country dialects is in Somerset.[2]

In the nearby counties of Berkshire, Hampshire and Oxfordshire it was possible to encounter comparable accents and, indeed, distinct local dialects until perhaps the 1960s. Although natives of such locations, especially in western parts, can still have West Country influences in their speech, the increased mobility and urbanisation of the population have meant that local Berkshire, Hampshire and Isle of Wight dialects (as opposed to accents) are today essentially extinct.

Academically the regional variations are considered to be dialectal forms. The Survey of English Dialects captured manners of speech across the West Country that were just as different from Standard English as anything from the far North. There is some influence from the Welsh and Cornish languages, depending on the specific location.

In literary terms, most of the usage has been in either poetry or dialogue, to add "local colour". It has rarely been used for serious prose in recent times, but was used much more extensively up to the 19th century. West Country dialects are commonly represented as "Mummerset", a kind of catchall southern rural accent invented for broadcasting.

Until the 19th century, the West Country and its dialects were largely protected from outside influences, due to its relative geographical isolation. The West Country dialects derive not from a corrupted form of modern English, but reflect the historical origins of the English language and its historical pronunciation, in particular Late West Saxon, which formed the earliest English language standard, from the time of King Alfred until the late 11th century. Thomas Spencer Baynes claimed in 1856 that, due to its position at the heart of the Kingdom of Wessex, the relics of Anglo-Saxon accent, idiom and vocabulary were best preserved in the Somerset dialect.[6]

The dialects have their origins in the expansion of Anglo-Saxon into the west of modern-day England, where the kingdom of Wessex (West-Saxons) had been founded in the 6th century. As the Kings of Wessex became more powerful they enlarged their kingdom westwards and north-westwards by taking territory from the British kingdoms in those districts. From Wessex, the Anglo-Saxons spread into the Celtic regions of present day Devon, Somerset and Gloucestershire, bringing their language with them. At a later period Cornwall became under Wessex influence, which appears to become more extensive after the time of Athelstan in the 10th century. However the spread of the English language took much longer here than elsewhere.

Outside Cornwall, it is believed that the various local dialects reflect the territories of various West Saxon tribes, who had their own dialects[7] which fused together into a national language in the later Anglo-Saxon period.[8]

As Lt-Col. J. A. Garton observed in 1971,[9] traditional Somerset English has a venerable and respectable origin, and is not a mere "debasement" of Standard English:

"The dialect is not, as some people suppose, English spoken in a slovenly and ignorant way. It is the remains of a language--the court language of King Alfred. Many words, thought to be wrongly pronounced by the countryman, are actually correct, and it is the accepted pronunciation which is wrong. English pronounces W-A-R-M worm, and W-O-R-M wyrm; in the dialect W-A-R-M is pronounced as it is spelt, Anglo-Saxon W-E-A-R-M. The Anglo-Saxon for worm is W-Y-R-M. Polite English pronounces W-A-S-P wosp; the Anglo-Saxon word is W-O-P-S and a Somerset man still says WOPSE. The verb To Be is used in the old form, I be, Thee bist, He be, We be, Thee 'rt, They be. 'Had I known I wouldn't have gone', is 'If I'd a-know'd I 'ooden never a-went'; 'A' is the old way of denoting the past participle, and went is from the verb to wend (Anglo-Saxon wendan)."

In some cases, many of these forms are closer to modern Saxon (commonly called Low German/Low Saxon) than Standard British English is, e.g.

The use of male (rather than neutral) gender with nouns, and sometimes female, also parallels Low German, which unlike English retains grammatical genders. The pronunciation of "s" as "z" is also similar to Low German. However recent research proposes that some syntactical features of English, including the unique forms of to BE, originate rather with the Brythonic languages. (see Celtic Language Influence below.)

In more recent times, West Country dialects have been treated with some derision, which has led many local speakers to abandon them or water them down. In particular it is British comedy which has brought them to the fore outside their native regions, and paradoxically groups such as The Wurzels, a comic North Somerset/Bristol band from whom the term Scrumpy and Western music originated, have both popularised and made fun of them simultaneously. In an unusual regional breakout, the Wurzels' song Combine Harvester reached the top of the UK charts in 1976, where it did absolutely nothing to dispel the "simple farmer" stereotype of Somerset folk. It and all their songs are sung entirely in a local version of the dialect, which is somewhat exaggerated and distorted. Some words used aren't even typical of the local dialect. For instance, the word "nowt" is used in the song "Threshing Machine". This word is generally used in more northern parts of England, with the West Country equivalent being "nawt". 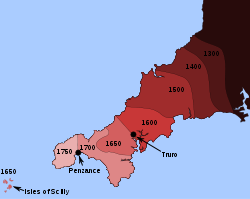 The shifting of the linguistic boundary (between English in the east, and Cornish in the west) in Cornwall 1300–1750. This is not to be thought of as a sharp boundary. It should not be inferred that there were no Cornish speakers to the east of a line, and no English speakers to the west.

Although the English language gradually spread into Cornwall after approximately the 13th century, a complete language shift to English took centuries more; during the Prayer Book Rebellion of 1549, which centred on Devon and Cornwall, many of the Cornish objected to the Book of Common Prayer, on the basis that many Cornish could not speak English. Cornish probably ceased to be spoken as a community language sometime around 1780, with the last monoglot Cornish speaker believed to be Chesten Marchant, who died in 1676 at Gwithian (Dolly Pentreath was bilingual). However some people retained a fragmented knowledge and some words were adopted by dialect(s) in Cornwall. In recent years, the traffic has reversed, with the revived Cornish language reclaiming Cornish words that had been preserved in the local dialect into its lexicon, and also (especially "Revived Late Cornish") borrowing other dialect words. However, there has been some controversy over whether all of these words are of native origin, as opposed to imported from parts of England, or the Welsh Marches. Some modern day revived Cornish speakers have been known to use Cornish words within an English sentence, and even those who are not speakers of the language sometimes use words from the language in names.[10]

Brythonic languages have also had a long-term influence on the West Country dialects beyond Cornwall, both as a substrate (certain West Country dialect words and possibly grammatical features) and languages of contact. Recent research[11] on the roots of English proposes that the extent of Brythonic syntactic influence on Old English and Middle English may have been underestimated, and specifically cites the proponderance of the forms of 'BE' and 'DO' in the southwestern region and their grammatical similarity to Welsh and Cornish in opposition to the 'Germanic' languages.

Bos: Cornish verb To Be

The Cornish dialect, or Anglo-Cornish (to avoid confusion with the Cornish language), has the most substantial Celtic language influence, because many western parts were non-English speaking, even into the early modern period. In places such as Mousehole, Newlyn and St Ives, fragments of Cornish survived in English even into the 20th century, e.g. some numerals (especially for counting fish) and the Lord's Prayer were noted by W. D. Watson in 1925, Edwin Norris collected the Creed in 1860, and J. H. Nankivel also recorded numerals in 1865. The dialect of West Penwith is particularly distinctive, especially in terms of grammar. This is most likely due to the late decay of the Cornish language in this area. In Cornwall the following places were included in the Survey of English Dialects: Altarnun, Egloshayle, Gwinear, Kilkhampton, Mullion, St Buryan, and St Ewe.

In other areas, Celtic vocabulary is less common, but it is notable that "coombe", cognate with Welsh cwm, was borrowed from Brythonic into Old English and is common in placenames east of the Tamar, especially Devon, and also in northern Somerset around Bath. Some possible examples of Brythonic words surviving in Devon dialect include:

In various districts there are also distinct grammatical and syntactical differences in the dialect:

There is a popular prejudice that stereotypes speakers as unsophisticated and even backward, due possibly to the deliberate and lengthened nature of the accent. This can work to the West Country speaker's advantage, however: recent studies of how trustworthy Britons find their fellows based on their regional accents put the West Country accent high up, under southern Scottish English but a long way above Cockney and Scouse.

The West Country accent is probably most identified in film as "pirate speech" – cartoon-like "Ooh arr, me 'earties! Sploice the mainbrace!" talk is very similar.[13] This may be a result of the strong seafaring and fisherman tradition of the West Country, both legal and outlaw. Edward Teach (Blackbeard) was a native of Bristol, and privateer and English hero Sir Francis Drake hailed from Tavistock in Devon. Gilbert and Sullivan's operetta The Pirates of Penzance may also have added to the association. West Country native Robert Newton's performance in the 1950 Disney film Treasure Island is credited with popularizing the stereotypical West Country "pirate voice".[13][14] Newton's strong West Country accent also featured in Blackbeard the Pirate (1952).[13] 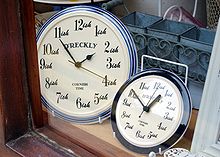 "Dreckly" on souvenir clocks in Cornwall

Some of these terms are obsolete, but some are in current use.

Some dialect words now appear mainly, or solely, in place names, such as "batch" (North Somerset, = hill but more commonly applied to Coalmine spoil heaps e.g. Camerton batch, Farrington batch, Braysdown batch), "tyning", "hoe" (a bay). These are not to be confused with fossilised Brythonic or Cornish language terms, for example, "-coombe" is quite a common suffix in West Country place names (not so much in Cornwall), and means a "valley".

Owing to the West Country's agricultural history, the sound of the West Country accent has for centuries been associated with farming and, as an effect, with lack of education and rustic simplicity. This can be seen in literature as early as the 18th century in Richard Brinsley Sheridan's play The Rivals, set in the Somerset city of Bath.

As more and more of the English population moved into towns and cities during the 20th century, non-regional, Standard English accents increasingly became a marker of personal social mobility. Universal elementary education was also an important factor as it made it possible for some to move out of their rural environments into situations where other modes of speech were current.

A West Country accent continues to be a reason for denigration and stereotype: "The people of the South West have long endured the cultural stereotype of 'ooh arr'ing carrot crunching yokels, and Bristol in particular has fought hard to shake this image off".[15]

As is the case with all of England's regional accents and dialects, increased mobility and communication during the 20th century seem to have strengthened the influence of Standard English throughout England (much less so in Scotland), particularly amongst the younger generations. The BBC Voices series also found that many people throughout Britain felt that this was leading to a "dilution" or even loss of regional accents and dialects. In the case of the West Country however, it seems that also social stigma has for a long time contributed to this process.