Meriadoc Brandybuck, usually referred to as Merry, is a fictional character from J. R. R. Tolkien's Middle-earth legendarium, featured throughout his most famous work, The Lord of the Rings.

A lover of boats and maps, Merry was described as one of Frodo Baggins' closest friends and also related to him several times over.

In The Lord of the Rings, Merry was often considered, and was described by Tolkien as, the most perceptive and intelligent of the Hobbits: for example, even before Bilbo Baggins left The Shire, he knew of the One Ring and its power of invisibility. He guarded Bag End after Bilbo's party, protecting Frodo from the various and often unwanted guests. He had a knowing manner and an innocent, teasing sense of humour. In one incident, Lobelia Sackville-Baggins accused Frodo of being a Brandybuck and no true Baggins; Merry assured Frodo, "It was a compliment; and so, of course, not true".

Merry also was a force behind "the Conspiracy" of Sam, Pippin, Fredegar Bolger and himself to help Frodo. Thus, at the beginning of The Fellowship of the Ring, Merry was well prepared and organized — he assembled their packs and brought ponies. His shortcut through the Old Forest distanced them from the Nazgûl for a time, though they had to be rescued from Old Man Willow by the enigmatic Tom Bombadil. At the Barrow-downs, he acquired his sword, actually a long dagger forged in the kingdom of Arnor.

At Bree, Merry was actually not present in the Prancing Pony when Frodo put on the Ring; instead, he was outside taking a walk, and was nearly overcome by a Nazgûl. At Rivendell, he was seen studying maps and plotting their path. He was admitted to the Fellowship only a little less reluctantly than Pippin; they were the two youngest members, and Elrond had planned on sending them back to the Shire.

At the entrance to Moria, he asked Gandalf the meaning of the door inscription "Speak, friend, and enter". When Gandalf discovered the true interpretation, he said, "Merry, of all people, was on the right track".

At Amon Hen, he was captured, along with Pippin, by a band of Saruman's Uruk-hai, although he gave a good account of himself, and was valiantly defended by Boromir. Escaping with Pippin into Fangorn forest, Merry was rescued by Treebeard. Along with Pippin, he drank significant amounts of Ent-draught and grew taller, despite being a fully-grown adult Hobbit. Accompanying Treebeard to the Entmoot and later to Isengard, he and Pippin took up residence in an Isengard gate-house. It was here that he first encountered King Théoden of Rohan, and was reunited with four of the remaining members of the Fellowship.

Separated from Pippin after his friend looked into the palantír and was whisked off to Gondor by Gandalf, Merry swore fealty to Théoden and became his esquire. Without permission from his liege, he rode to Gondor with a disguised Éowyn. In the Battle of the Pelennor Fields, while the Witch-king of Angmar was preoccupied with Éowyn, Merry stabbed the Nazgûl in the sinew behind his knee. His sword was made by the Dúnedain of Arnor, and was made for combat against the Nazgûl. Thus, the Black Captain was stricken down by Merry, his protective enchantments broken, and his crown was knocked to the ground by Éowyn, where it fell lifelessly. As a result, the prophecy was fulfilled as he was not killed "by the hands of Men," but rather by that of a Hobbit and a woman. Merry heard Théoden's last words, but went unnoticed by the honour escort of Riders; Pippin found him wandering in the city. Aragorn healed him and he recovered fully; more quickly than Éowyn.

For his bravery in battle, Merry was knighted by King Éomer as a Knight of the Mark. During the scouring of the Shire, he led the Hobbits in the Battle of Bywater, and personally killed the leader of the opposing forces.

Upon his return, he and Pippin were clearly seen to be the tallest of Hobbits, taller even than the legendary Bullroarer Took (as Sam said at the Field of Cormallen, Merry was three inches taller than he ought to have been). Merry went on to marry Estella Bolger sometime after the end of the Third Age. He inherited the title Master of Buckland in year 11 of the Fourth Age. He retained his links with Rohan and became expert in Rohan's language and traditions, which he discovered to his surprise to have close affinity to the early history of the Hobbits. Although he was not recorded as having any children within the family trees, he is noted as having at least one son. At the age of 102, he returned to Rohan and Gondor with Pippin, dying there around the year F.A. 64. After his death he and Pippin were laid with the Kings of Gondor in Rath Dínen.

Merry was unarmed (except for a small pocket-knife) until the encounter with the barrow-wights. The Hobbits found several long Dúnedain daggers in the wight's treasure. These served as short-swords for the Hobbits, and Merry used his to stab the Witch-king in the back of the knee at the Battle of the Pelennor Fields. Upon doing so, the dagger was destroyed, as all blades that touched the unseen flesh of the Witch-king suffered this fate. The blade had been enchanted in such a way as to be quite deadly to the Witch-king, specifically, by the unnamed weaponsmith of Arnor who forged it.[citation needed] This power was said to be what destroyed the head Nazgûl. It was as a result of his bravery in this battle that Merry subsequently gained the soubriquet "The Magnificent".

At the beginning of The Fellowship of the Ring, Merry was dressed as a typical Hobbit: knee breeches, jacket, waistcoat, cloak. After being waylaid by the barrow-wights, he lost his lighter, summer-weight clothes and was left in a burial shift. He was forced to wear heavier woollen clothing packed on his pony the rest of the way to Rivendell. Later, he was presented an Elven cloak in Lórien, which gave him an ability to blend into natural surroundings. Merry offered his services to Théoden, King of Rohan, and was equipped with mail, a light leather helmet, and a small green shield with a white horse emblem. He also received the horn of Rohan from Éowyn, sister to Éomer, the king of Rohan. Upon returning to the Shire, Merry was described as wearing chain-mail and presumably had a new sword of Gondor or Rohan-make. Later, he and his friend Pippin Took were known to ride about the Shire dressed in their Lórien cloaks with distinctive leaf-shaped clasps.

Merry (right) and Pippin in Ralph Bakshi's animated version of The Lord of the Rings. 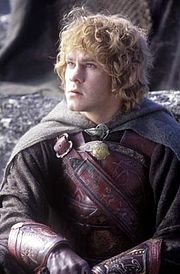 Dominic Monaghan as Merry in Peter Jackson's live-action version of The Lord of the Rings.

In Ralph Bakshi's 1978 animated version of The Lord of the Rings, Merry was voiced by Simon Chandler. In the live-action recordings Bakshi used for rotoscoping, Billy Barty was the model for several of the hobbits, but it is not clear whether Barty modelled for Merry.

In the 1980 animated version of The Return of the King, made for television, the character was voiced by radio personality Casey Kasem, also known for voicing the character of Shaggy in Scooby-Doo.

In the 1981 BBC radio serial of The Lord of the Rings, Merry was played by Richard O'Callaghan.

In Peter Jackson's 2001-2003 film trilogy adaptation of the books, Merry was portrayed by Dominic Monaghan. In Jackson's The Lord of the Rings: The Return of the King Merry accompanied the army of the West to the Black Gate, while in the book he remained in Minas Tirith to heal from the wound he received when attempting to kill the Witch-king of Angmar and was instrumental in the romance between Faramir and Éowyn.

In the prefaces and appendices to The Lord of the Rings, Tolkien employed the conceit that he was the modern translator of a unique manuscript, the Red Book of Westmarch, and that his stories of Middle-earth derived from that. In this guise of translator, he maintained that Meriadoc Brandybuck was not the character's real name, but rather Kalimac Brandagamba. This was said to be an actual phonetic transcription of the name in Tolkien's invented language of Westron, which Tolkien said he transliterated to English as follows: The nickname "Merry" represents his actual nickname Kali which meant "handsome, happy", and "Meriadoc" serves as a plausible name from which a nickname meaning "happy" could be derived.[1]

Théoden called Merry Holdwine, and the Hobbit was thus known as such in the records of Rohan. It most probably derives from the Old English words hold and wine, respectively meaning "faithful" and "friend".[2] Tolkien used Old English to represent Rohirric, another of his fictional languages, so Holdwine, like Meriadoc Brandybuck, is not what the character was actually called. Tolkien does not give Merry's real Rohirric name.

It has been asserted that the name Meriadoc could be in itself an allusion to the British nobleman Conan Meriadoc, legendary founder of the house of Rohan in Brittany,[3] since the character Meriadoc is closely associated with Tolkien's kingdom of Rohan.