The number of languages currently estimated and catalogued in Nigeria is 521. This number includes 510 living languages, two second languages without native speakers and 9 extinct languages. In some areas of Nigeria, ethnic groups speak more than one language. The official language of Nigeria, English, the former colonial language, was chosen to facilitate the cultural and linguistic unity of the country. The major languages spoken in Nigeria are Hausa, Igbo, Yoruba, Fulfulde, Kanuri, Ibibio. Even though most ethnic groups prefer to communicate in their own languages, English, being the official language, is widely used for education, business transactions and for official purposes. English, however, remains an exclusive preserve of the country's urban elite, and is not widely spoken in rural areas. With approximately 75% of Nigeria's populace in the rural areas, the major languages of communication in the country remain national languages, with the most widely spoken being Hausa, Igbo and Yoruba. Foreign minorities speak their own languages aside from English and/or major native languages.

Nigeria's linguistic diversity is a microcosm of Africa as a whole, encompassing three major African languages families: the Afroasiatic, Nilo-Saharan, and the Niger–Congo A branch of the Niger–Congo family. Nigeria also has one unclassifiable language, Cen Tuum, spoken by a few old people among the Cham in Gombe State. This may represent a relic of an even greater diversity prior to the spread of the current language families.

Niger–Congo predominates in central and southern Nigeria; the main branches represented in Nigeria are Mande, Atlantic, Gur, Kwa, Benue–Congo and Adamawa–Ubangian. Mande is represented by the Busa cluster and Kyenga in the northwest. Fulfulde is the single Atlantic language, of Senegambian origin but now spoken by cattle pastoralists across the Sahel and largely in the North of Nigeria by the Fulani (sometimes Fulbe) diaspora. The Ijoid languages are spoken across the Niger Delta and include Ịjọ (Ijaw), Kalabari, and the intriguing remnant language Defaka. The Efik language is spoken across the coastal southeastern part of Nigeria and includes the dialects Ibibio, Annang, and Efik proper. The single Gur language spoken is Baatọnun, in the Northwest. The Adamawa–Ubangian languages are spoken between central Nigeria and the Central African Republic. Their westernmost representatives in Nigeria are the Tula-Waja languages. The Kwa languages are represented by the Gun group in the extreme southwest, which is affiliated to the Gbe languages in Benin and Togo.

The classification of the remaining languages is controversial; Joseph Greenberg classified those without noun-classes, such as Yoruba, Igbo, and Ibibio (Efik, Ibibio, and Annang), as 'Eastern Kwa' and those with classes as 'Benue–Congo'. This was reversed in an influential 1989 publication and reflected on the 1992 map of languages, where all these were considered Benue–Congo. Recent opinion, however, has been to revert to Greenberg's distinction. The literature must thus be read with care and due regard for the date. There are several small language groupings in the Niger Confluence area, notably Ukaan, Akpes, Ayere-Ahan and Ọkọ, whose inclusion in these groupings has never been satisfactorily argued.

Former Eastern Kwa, i.e. West Benue–Congo would then include Yoruboid, i.e. Yoruba, Itsekiri and Igala, Akokoid (eight small languages in Ondo, Edo and Kogi state), Edoid including Edo in Edo State, Igboid, Ibibio-Efik, Idomoid (Idoma) and Nupoid (Nupe) and perhaps include the other languages mentioned above. East Benue–Congo includes Kainji, Plateau (46 languages, notably Eggon), Jukunoid, Dakoid and Cross River. Apart from these, there are numerous Bantoid languages, which are the languages immediately ancestral to Bantu. These include Mambiloid, Ekoid, Bendi, Beboid, Grassfields and Tivoid languages. The geographic distribution of Nigeria's Niger–Congo languages is not limited to south-central Nigeria, as migration allows their spread to the linguistically Afro-Asiatic northern regions of Nigeria, as well as throughout West Africa and abroad. Yoruba is spoken as a ritual language in cults such as the Santeria in the Caribbean and South-Central America, and the Berbice Dutch language in Surinam is based on an Ijoid language.

Even the above listed linguistic diversity of the Niger–Congo in Nigeria is deceptively limiting, as these languages may further consist of regional dialects that may not be mutually intelligible. As such some languages, particularly those with a large number of speakers, have been standardized and received a romanized orthography. Nearly all languages appear in a Roman script when written, often with modifications allowing for a language's particularities. The Yoruba, Igbo and Efik languages are notable examples of this process; Standard Yoruba came into being due to the work Samuel Crowther, the first African bishop of the Anglican Church and owes most of its lexicon to the dialects spoken in Ọyọ and Ibadan. Since Standard Yoruba's constitution was determined by a single author rather than by a consensual linguistic policy by all speakers, the Standard has been attacked regarding for failing to include other dialects and spurred debate as to what demarcates "genuine Yoruba". The more historically recent standardization and romanization of Igbo has provoked even more controversy due to its dialectical diversity, but the Central Igbo dialect has gained the widest acceptance as the standard-bearer; however many such as Chinua Achebe have dismissed standardization as colonial and conservative attempts to simplify a complex mosaic of languages. Such controversies typify inter- and intra-ethnic conflict endemic to post-colonial Nigeria. Also worthy of note is the Enu-ani Language, a variation of the Igbo that is spoken among the Aniomas. The Aniomas are the Aniocha's, Ndokwa's, Ika's and Oshimilli's. An ethnic Ibo found in the Niger-Delta region.

Linguistically speaking, all demonstrate the varying phonological features of the Niger–Congo family to which they belong, these include the use of tone, nasality, and particular consonant and vowel systems; more information is available here. 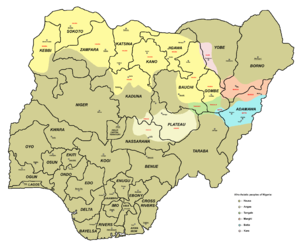 The Afroasiatic languages of Nigeria divide into Chadic, Semitic and Berber. Of these, Chadic languages predominate, with 70+ languages. Semitic is represented by various dialects of Arabic spoken in the Northeast and Berber by the Tuareg-speaking communities in the extreme Northwest.

The Hausa language is the most well-known Chadic language in Nigeria; though there is a paucity of statistics on native speakers in Nigeria, the language is spoken by 24 million people in West Africa and is the second language of 15 million more. Hausa has therefore emerged as lingua franca throughout much of West Africa and the Sahel in particular. The language is spoken primarily amongst Muslims, and the language is often associated with Islamic culture in Nigeria and West Africa on the whole. Hausa is classified as a West Chadic language of the Chadic grouping, a major subfamily of Afroasiatic. Culturally, the Hausa people have become closely integrated with the Fulani following the jihadist establishment of the Sokoto Caliphate by the Fulani Uthman dan Fodio in the 19th century. Hausa is the official language of a number states in Northern Nigeria and the most important dialect is generally regarded as that spoken in Kano,an Eastern Hausa dialect, which is the standard variety used for official purposes. Eastern dialects also include some dialects spoken in Zaria, and Bauchi; Western Hausa dialects include Sakkwatanchi spoken in Sokoto, Katsinanchi in Katsina Arewanchi in both Gobir and Adar, Kebbi, and Zamfara. Katsina is transitional between Eastern and Western dialects. Northern Hausa dialects include Arewa and Arawa, while Zaria is a prominent Southern tongue version; Barikanchi is a pidgin formerly used in the military.

Hausa, as well as other Afroasiatic languages like Bade (another West Chadic language spoken in Yobe State), have historically been written in a modified Arabic script known as ajami, however, the modern official orthography is now a romanization known as boko first introduced by the British regime in the 1930s.