The main language of government is English even if South Africans often take pride in using indigenous languages for any purpose. Afrikaans also features prominently in commerce together with English as the languages with the highest number of affluent speakers are Afrikaans and English.[7]

In terms of linguistic classification, the official languages include two West-Germanic languages (English and Afrikaans) and nine Bantu languages. Four of these are Nguni languages (Zulu, Xhosa, Swati and Ndebele) and three are Sotho–Tswana languages (Northern Sotho, Southern Sotho and Tswana). Tsonga is a Tswa–Ronga language. 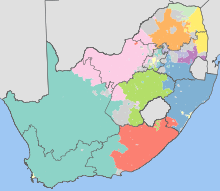 The most common language spoken at home by South Africans is Zulu (24 percent speak Zulu at home), followed by Xhosa (18 percent), and Afrikaans (13 percent). English is only the sixth-most common home language in the country, but is understood in most urban areas and is (mainly for political reasons) the dominant language in government and the media.[8]

The majority of South Africans speak a language from one of the two principal branches of the Bantu languages represented in South Africa: the Sotho–Tswana branch (Sotho, Northern Sotho, Tswana), or the Nguni branch (Zulu, Xhosa, Swati, Ndebele). For each of the two groups, the languages within that group are for the most part intelligible to a native speaker of any other language within that group.

As can be seen from the accompanying maps, the nine indigenous African languages of South Africa can be divided into two geographical zones, with Nguni languages being predominant in the south-eastern third of the country (Indian Ocean coast) and Sotho languages being predominant in the northern third of the country located further inland, as also in Botswana and Lesotho. Gauteng is the most linguistically heterogeneous province, with roughly equal numbers of Nguni, Sotho and Indo-European language speakers. This has resulted in the spread of an urban argot, Tsotsitaal, in large urban townships in the province.

Afrikaans, a language derived from Dutch, is the most widely spoken language in the western half of the country (Western and Northern Cape). It is spoken not only by a majority of whites but also by about 90 percent of Coloured (multiracial) people in the country. Afrikaans is also spoken widely across the centre and north of the country, as a second (or third or even fourth) language by Black South Africans living in farming areas.

Other languages spoken in South Africa, though not mentioned in the Constitution, include Fanagalo, Lobedu (Khilobedu), Northern Ndebele (Sindebele), Phuthi (Siphuthi). Lobedu has been variously claimed to be a dialect of Northern Sotho and an autonomous language. Fanagalo is a pidgin often used as a mining lingua franca.

Significant numbers of immigrants from Europe, elsewhere in Africa, and the Indian subcontinent means that a wide variety of other languages can also be found in parts of South Africa. In the older immigrant communities there are: Greek, Gujarati, Hindi, Portuguese, Tamil, Urdu, Yiddish, and smaller numbers of Dutch, French and German speakers.

The fastest growing non-official language is Portuguese - first spoken by white, black, and mulato settlers and refugees from Angola and Mozambique after they won independence from Portugal and now by more recent immigrants from those countries again - and increasingly French, spoken by immigrants and refugees from Francophone Central Africa.

More recently, speakers of North, Central and West African languages have arrived in South Africa, mostly in the major cities, especially in Johannesburg and Pretoria, but also Cape Town and Durban.

Chapter 1 (Founding Provisions), Section 6 (Languages) of the Constitution of South Africa is the basis for government language policy. The English text of the constitution signed by president Nelson Mandela on 16 December 1996 curiously contains the names of the languages in the language itself rather than English. Controversy surrounds the use of Sepedi as opposed to Sesotho sa Leboa (which was the wording in the 1994 interim constitution) in the text. The spelling of Venda is also incorrectly rendered as Tshivenda instead of the correct Tshivenḓa: The constitution mentions "sign language" in the generic sense rather than, as is widely believed, South African Sign Language specifically.

English, the country's lingua franca, is the language of business, politics, and modern communication media, but ranks sixth in home usage.[9]