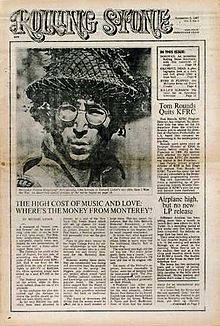 Rolling Stone is a US-based magazine devoted to music, liberal politics, and popular culture that is published every two weeks. Rolling Stone was founded in San Francisco in 1967 by Jann Wenner (who is still editor and publisher) and music critic Ralph J. Gleason.

The magazine was known for its political coverage beginning in the 1970s, with the enigmatic and controversial gonzo journalist Hunter S. Thompson. Rolling Stone magazine changed its format in the 1990s to appeal to younger readers,[3] often focusing on young television or film actors and pop music. This led to criticism that the magazine was emphasizing style over substance.[4] In recent years, the magazine has resumed its traditional mix of content, including in-depth political stories, and has seen its circulation increase.

To get the magazine off the ground, Wenner borrowed $7,500 from his family members and from the family of his soon-to-be wife, Jane Schindelheim.[5] The first issue carried a cover date of November 9, 1967.[6] Rolling Stone magazine was initially identified with and reported on the hippie counterculture of the era. However, the magazine distanced itself from the underground newspapers of the time, such as Berkeley Barb, embracing more traditional journalistic standards and avoiding the radical politics of the underground press. In the very first edition of the magazine, Wenner wrote that Rolling Stone "is not just about the music, but about the things and attitudes that music embraces." This has become the de facto motto of the magazine.

In the 1970s, Rolling Stone began to make a mark for its political coverage, with the likes of gonzo journalist Hunter S. Thompson writing for the magazine's political section. Thompson would first publish his most famous work Fear and Loathing in Las Vegas within the pages of Rolling Stone, where he remained a contributing editor until his death in 2005. In the 1970s, the magazine also helped launch the careers of many prominent authors, including Cameron Crowe, Lester Bangs, Joe Klein, Joe Eszterhas, Patti Smith and P. J. O'Rourke. It was at this point that the magazine ran some of its most famous stories, including that of the Patty Hearst abduction odyssey. One interviewer, speaking for large numbers of his peers, said that he bought his first copy of the magazine upon initial arrival on his college campus, which he described as a "rite of passage".[4]

During the 1980s the magazine began to shift focus towards being a general "entertainment" magazine. Music was still a dominant topic but there was increasing coverage of celebrities in television, movies and the pop culture of the day. The magazine also initiated its annual "Hot Issue" during this time.

The printed format has gone through several changes. The first publications 1967-72, were folded tabloid newspaper format, no staples with black ink text, and a single color highlight that changed each edition. From 1973 on, editions were done on a 4 color press with a different newsprint paper size. In 1979 the bar code appeared. In 1980 it became a gloss paper large format 10 x 12 magazine. As of the October 30th, 2008 edition, Rolling Stone is a smaller, standard-format magazine size. (USA Today,[volume & issue needed] Associated Press Anick Jesdanun)

One major criticism of Rolling Stone involves its generational bias toward the 1960s and 1970s. One critic referred to the Rolling Stone list of the "99 Greatest Songs" as an example of "unrepentant rockist fogeyism".[7] In further response to this issue, rock critic Jim DeRogatis, a former Rolling Stone editor, published a thorough critique of the magazine's lists in a book called Kill Your Idols: A New Generation of Rock Writers Reconsiders the Classics (ISBN 1-56980-276-9), which featured differing opinions from many younger critics.[8] Conservative columnist Jonah Goldberg criticised the magazine writing that "Rolling Stone has essentially become the house organ of the Democratic National Committee."[9] Rolling Stone editor Jann Wenner has made all of his political donations to Democrats.[10]

Hunter S. Thompson, in an article that can be found in his book Generation of Swine, criticized the magazine for turning on marijuana even though the magazine embraced it in the 60s and 70s when Thompson was a frequent contributor.[citation needed]

Rolling Stone magazine has been criticized for reconsidering many classic albums that it had previously dismissed. Examples of artists for whom this is the case include, among others, The Beatles, Led Zeppelin, Black Sabbath, AC/DC, The Beach Boys, Nirvana, Weezer, Radiohead, Outkast and also Queen. For example, Led Zeppelin was largely written off by Rolling Stone magazine critics during the band's most active years in the 1970s. However by 2006, a cover story on Led Zeppelin honored them as "the Heaviest Band of All Time".[11] A critic for Slate magazine described a conference at which 1984's The Rolling Stone Record Guide was scrutinized. As he described it, "The guide virtually ignored hip-hop and ruthlessly panned heavy metal, the two genres that within a few years would dominate the pop charts. In an auditorium packed with music journalists, you could detect more than a few anxious titters: How many of us will want our record reviews read back to us 20 years hence?"[7] Another example of this bias was that the album Nevermind, by grunge band Nirvana, was given three stars in its original review, despite being placed at #17 in "The 500 Greatest Albums of All Time" list in 2003. Also, when The Beatles' Let It Be was released in 1970, the magazine originally gave the album a poor review, yet in 2003, Rolling Stone ranked it number 86 in the magazine's list of the 500 Greatest Albums of All Time.[12]

At the end of June 2010 Rolling Stone caused a controversy in the White House by publishing in the July issue an article by journalist Michael Hastings, titled "The Runaway General",[13] quoting criticism of General Stanley A. McChrystal, commander of the International Security Assistance Force and U.S. Forces-Afghanistan commander, about Vice President Joe Biden and other Administration members of the White House. McChrystal resigned from his position shortly after his statements went public.[14][15][16][17]

The hire of former FHM editor Ed Needham further enraged critics who alleged that Rolling Stone had lost its credibility.[18]

The 2003 Rolling Stone's 100 Greatest Guitarists of all Time article's inclusion of only two female musicians resulted in Venus Zine answering with their own list titled "The Greatest Female Guitarists of All Time".[19]

Rolling Stone has maintained a website for many years, with selected current articles, reviews, blogs, MP3s, and other features such as searchable and free encyclopedic articles about artists, with images and sometimes sound clips of their work. The articles and reviews are sometimes in a revised form from the versions that are published. There are also selected archival political and cultural articles and entries. The site also at one time had an extensive message board forum. By the late 1990s, the message board forum at the site had developed into a thriving community with a large number of regular members and contributors worldwide. The site was also plagued with numerous Internet trolls and malicious code-hackers who vandalized the forum substantially.[20] Rolling Stone abruptly deleted the forum in May 2004. Rolling Stone began a new, much more limited message board community at their site in late 2005, only to remove it again in 2006. Rolling Stone also has a page at MySpace, Facebook, and Twitter. In March 2008, the Rolling Stone website started a new message board section once again, then deleted it in April 2010. The magazine devotes one of its Table of Contents pages to promoting material currently appearing at its website, listing detailed links to the items. As of April 19, 2010, the website has been updated drastically and features the complete archives of Rolling Stone.[citation needed] Around the same time it was announced that the Rolling Stone website would adopt the view by subscription model, charging for content. The subscription model is now in place.

See also: List of celebrities who have appeared on the cover of Rolling Stone magazine 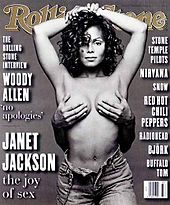 Janet Jackson featured on a 1993 cover of Rolling Stone issue 665 with the hands of her then-unknown husband René Elizondo, Jr. cupping her breasts.

Some artists have graced the cover many times, some of these pictures going on to become iconic. The Beatles, for example, have appeared on the cover over thirty times, either individually or as a band.[26] The first ten issues featured the following: