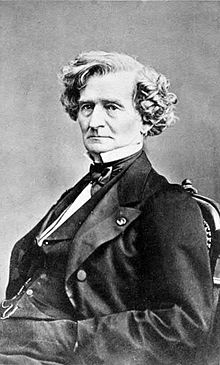 Hector Berlioz, active as a music journalist in Paris in the 1830s and 1840s.

Music journalism is criticism and reportage about music. It began in the eighteenth century as comment on what is now thought of as 'classical music'. This aspect of music journalism, today often referred to as music criticism (although that risks confusion with the academic discipline), comprises the study, discussion, evaluation, and interpretation of music and its performance. Modern art music journalism is often informed by music theory consideration of the many diverse elements of a musical piece or performance, including (as regards a musical composition) its form and style, and as regards performance, standards of technique and expression. It was expressed, for example, in journals such as Neue Zeitschrift für Musik founded by Robert Schumann, and is continued today in the columns of serious newspapers and journals such as The Musical Times.

Today a major branch of music journalism is an aspect of entertainment journalism — covering popular music and including profiles of singers and bands and album reviews. In the 2000s, online music bloggers are to some degree displacing newspaper and magazine-based pop music critics.

Before about the 1840s, reporting on music was either done by musical journals, such as Allgemeine musikalische Zeitung or the Neue Zeitschrift für Musik (founded by Robert Schumann), and in London such journals as The Musical Times (founded in 1844 as The Musical Times and Singing-class Circular); or else by reporters at general newspapers where music did not form part of the central objectives of the publication. An influential English 19th-century music critic, for example, was John Davison of The Times. The composer Hector Berlioz also wrote reviews and criticisms for the Paris press of the 1830s and 1840s.

Several factors — including growth of education, the influence of the Romantic movement generally and in music, popularization (including the 'star-status' of many performers such as Liszt and Paganini), among others — led to an increasing interest in music among non-specialist journals, and an increase in the number of critics by profession, of varying degrees of competence and integrity. The situation here was distinguished from that before the 1840s, in that the critics now — on the whole — were not also practising musicians; this could be considered a turning‐point.

Amongst modern practitioners of the classical music tradition who also write (or wrote) on music may be included Alfred Brendel, Charles Rosen, Paul Hindemith and Ernst Krenek.

In 2007, The New York Times stated that "Classical music criticism, a high-minded endeavor that has been around at least as long as newspapers...has taken a series of hits in recent months", because "[c]ritics’ jobs have been eliminated, downgraded or redefined at newspapers in Atlanta, Minneapolis and elsewhere around the country and at New York magazine, where Peter G. Davis, one of the most respected voices of the craft, said he had been forced out after 26 years".[2] The Classical music scene views "...robust analysis, commentary and reportage as vital to the health of the art form".[2] In the late 2000s, Classical music criticism is increasingly available on blogs. Nevertheless, a "number of major newspapers still have full-time classical music critics, including The Los Angeles Times, The Washington Post, The Baltimore Sun, The Philadelphia Inquirer [,] The Boston Globe" and "The New York Times [,which] maintains a staff of three full-time classical music critics and three freelancers".[2]

Music writers only started "treating pop and rock music seriously" in 1964 "after the breakthrough of the Beatles...".[3] One of the early music magazines in Britain, Melody Maker, complained in 1967 about how "newspapers and magazines are continually hammering [i.e., attacking] pop music".[4] Melody Maker magazine advocated the new forms of pop music of the late 1960s. "By 1999, the 'quality' press was regularly carrying reviews of popular music gigs and albums", which had a "key role in keeping pop" in the public eye. As more pop music critics began writing, this had the effect of "legitimating pop as an art form"; as a result, "newspaper coverage shifted towards pop as music rather than pop as social phenomenon".[5]

Steve Jones claims that both popular music articles and academic articles about pop music are usually written from "masculine subject positions". As more pop music critics began writing, this had the effect of "legitimating pop as an art form"; as a result, "newspaper coverage shifted towards pop as music rather than pop as social phenomenon";[6] as well, in the way that critics differentiate between pop music and rock, using terms like "trivial", "fluffy", or "formulaic" for pop (versus "serious", "raw", and "sincere" for rock), there is an implicit or even explicitly gendered dichotomy.[7] Simon Frith notes that pop and rock music are closely associated with gender; that is, with conventions of male and female behaviour.[8]

In the world of pop music criticism, there tends to be a quick turnover. The "pop music industry expects that any particular [music critic] star can disappear within five years; in contrast, the "stars" of rock criticism are more likely to have long careers with "book contracts, featured columns, and editorial and staff positions at magazines and newspapers. Critic Robert Christgau was the "originator of the 'consumer guide' approach to pop music reviews", an approach to writing pop recording reviews that was designed to help consumers to decide whether to buy a new album.[9]

In the realm of rock music (as indeed in that of classical music),[10] critics have not always been respected by their subjects. Frank Zappa declared that, "Most rock journalism is people who can't write, interviewing people who can't talk, for people who can't read." In the Guns N' Roses song "Get in the Ring", Axl Rose verbally attacked critics who gave the band negative reviews because of their actions on stage; such critics as Andy Secher, Mick Wall and Bob Guccione, Jr. were mentioned by name. 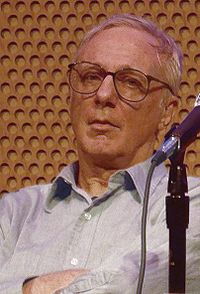 US music writer Robert Christgau was one of the first rock critics in the 1960s.

Carl Wilson describes "an upsurge in pro-pop sentiment among critics" during the early 2000s, a "new generation [of music critics] moved into positions of critical influence" and then "mounted a wholesale critique against the syndrome of measuring all popular music by the norms of rock culture."[11] In 2008, Ann Powers of the LA Times argued that "[p]op music critics have always been contrarians", because "pop music [criticism] rose up as a challenge to taste hierarchies, and has remained a pugilistic, exhibitionist business throughout pop's own evolution."[12]

Powers claims that "[i]nsults, rejections of others' authority, bratty assertions of superior knowledge and even threats of physical violence are the stuff of which pop criticism is made"; at the same time, the "best [pop criticism] also offers loving appreciation and profound insights about how music creates and collides with our everyday realities." She states that pop criticism developed as a "slap at the establishment, at publications such as the hippie homestead Rolling Stone and the rawker outpost Creem." She notes that the "1980s generation" of post-punk indie rockers "has lately [i.e., in the 2000s] been taken down by younger "poptimists," who argue that lovers of underground rock are elitists for not embracing the more multicultural mainstream". Powers claims that with the 2000s-era "poptimism" critical approach, debates about bands and styles are "like the scrum in rugby", because "[e]verybody pushes against everybody else, and we move forward in a huge blob of vehement opinion and mutual judgment".[12]

Slate magazine writer Jody Rosen discussed the 2000s-era trends in pop music criticism in the article "The Perils of Poptimism". Rosen notes that much of the debate is centred over the perception that that rock critics "...regard rock as "normative … the standard state of popular music … to which everything else is compared."[13] At a 2006 pop critic conference, attendees discussed their "...guilty pop pleasures, reconsidering musicians (Tiny Tim, Dan Fogelberg, Phil Collins) and genres (blue-eyed soul, Muzak)" which rock critics have long dismissed as lightweight, commercial music. Rosen states that "this new critical paradigm" is called "popism"—or, more evocatively (and goofily), "poptimism". The "poptimism" approach states that "Pop (and, especially, hip-hop) producers are as important as rock auteurs, Beyoncé is as worthy of serious consideration as Bruce Springsteen, and ascribing shame to pop pleasure is itself a shameful act".[14] In 2006, Martin Edlund from the New York Sun argued that music bloggers are to some degree displacing newspaper and magazine-based pop music critics. Edlund notes that while the "Internet has democratized music criticism, it seems it's also spread its penchant for uncritical hype".[15]