Event organisers confirmed in January 2011 that there would be no awards show that year[1] because Meteor cancelled its sponsorship of the event.[2] 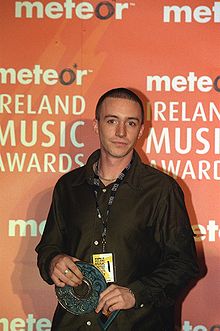 Example of a Meteor Award

The Meteor Ireland Music Awards are the equivalent to the Canada's Juno Award's, the United States Grammy Awards,[3] the Echo Awards in Germany and the United Kingdoms BRIT Awards. The awards take their name from their sponsors, Meteor.

Each year there is a mix of live performances and award presentations at a ceremony conducted in the Point Theatre, Dublin (2001–2007) and the RDS, Dublin (2008–present). Irish artists to have showcased their music include Snow Patrol, Sinéad O'Connor, U2, Bell X1, Aslan, Westlife, The Blizzards, The Frames, The Coronas, Director, Hothouse Flowers, Cathy Davey, The Devlins, The Thrills, Paddy Casey and The Immediate, whilst previous live performances by international artists have included the Pussycat Dolls, Amy Winehouse, Sugababes, Counting Crows, The Darkness, Kaiser Chiefs, Lionel Richie and Tom Jones.

Those to have presented awards to recipients include both Irish and international figures from music, sport, film, television and beauty, such as Joe Elliott, Denis Hickie, Colin Farrell, Alex Zane and Rosanna Davison. The award ceremony has been hosted by a number of different personalities throughout its history; these include Ed Byrne, Patrick Kielty, Amanda Byram, Podge and Rodge alongside Deirdre O'Kane and Dara Ó Briain, who has performed the role on at least three occasions, most recently in 2008.

Originally held in the Point Theatre in Dublin, in 2008 the award ceremony moved to the Royal Dublin Society.