All That You Can't Leave Behind

All That You Can't Leave Behind 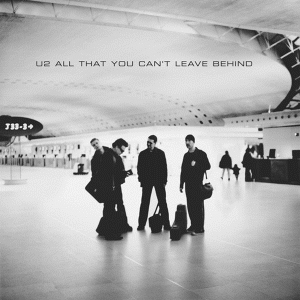 "All That You Can't Leave Behind" is the tenth studio album by the Irish rock band , released in 2000 by in the UK and in the U.S. The album signaled the band's return to a more traditional sound after their experimentation with and dance music in the 1990s and the cold reception to their 1997 album "Pop". U2 declared on a number of occasions that they were "reapplying for the job ... [of] the best band in the world". [cite web |url=http://www.time.com/time/arts/article/0,8599,212605,00.html |title=Bono's Mission |accessdate=2007-03-10 |last=Tyrangiel |first=Josh |work=Time |date=2002-02-23 ] The album reunited the band with producers and , also with the participation of .

"All That You Can't Leave Behind" was commercially successful, selling over 12 million copies, and critically acclaimed, with the band winning seven . The songs "", "Walk On", "Elevation", and "" were all successful singles. RS500|139

Reuniting the band with the production duo of and —who also produced "", "" and "" albums—the album was seen as a return to the band's traditional sound after their more experimental records of the 1990s. In many ways, however, this is an oversimplification, as the album breaks new ground by retaining the sonic nuances of their 1990s work and reconciling it with the melodic, hook-filled rock of their 1980s work. The first song (and lead single), "," for instance, is an optimistic anthem that opens with a drum machine and a rhythm sequencer. The album also includes "," a song written by for his friend, lead singer of , , who committed suicide in 1997.

"All That You Can't Leave Behind" is easy to relate to, full of solid songs that appeal to a wide audience with its clear notions of family, friendship, love, death, and re-birth. More Lanois than Eno on first impression, the sounds on this album come from a band that has digested the music it started to consume while making "Rattle and Hum". This time they are neither imitating or paying tribute. This time it's soul music, not music about soul.

The album met wide acclaim from critics and the public, debuting at #1 in 28 countries (#3 in the ). Many critics, such as "" magazine, declared it as "U2's third masterpiece", alongside "" and "". [cite web | title=U2 - All That You Can't Leave Behind | date= | work= | url=http://www.rollingstone.com/artists/u2/albums/album/232369/review/6068360/all_that_you_cant_leave_behind | accessdate=2007-07-11 ] The first single released was "Beautiful Day", which reached #1 in the UK single charts (which tracks the popularity of individual songs) and in most an countries, and . "All That You Can't Leave Behind" became the fourth highest-selling U2 album, with total sales of over 12 million. The album holds an average critic score of 80% on .

The accompanying Elevation Tour officially began on March 24, 2001 with a two-night stay at the near , [ [http://www.u2tours.com/find.src?TOUR=Elevation+-+1st+leg&Concert=&x=21&y=21 U2Tours.com] - Elevation Tour, 1st leg] and ended back in on December 2, 2001 at the . [ [http://www.u2tours.com/find.src?TOUR=Elevation+-+3rd+leg&Concert=&x=20&y=17 U2Tours.com] - Elevation Tour, 3rd leg] The tour featured three legs and a total of 113 shows. [ [http://www.u2-vertigo-tour.com/Elevation_Tour.html U2 Vertigo Tour.com] - Elevation Tour statistics] The Elevation Tour saw U2 return to playing indoor arenas after they spent the 1990s in outdoor stadiums. The stage design of the Elevation Tour was more stripped-down and intimate for the fans. The tour grossed approximately US$110 million, and in 2005 was listed as the third biggest tour of all time by , [ [http://www.usatoday.com/life/music/news/2005-01-23-u2-tour-dates_x.htm U2 tour has the concert business getting dizzy] - USA Today, January 23, 2005] with many of the stops selling out immediately. [ [http://www.pollstar.com/news/viewnews.pl?NewsID=1420 More U2 For The U.S.] - Pollstar, November 8, 2001] The band performed multiple shows in the same location including four consecutive shows in , Boston and , respectively.

The songs "Elevation" and "Beautiful Day", which debuted on the tour, are two of only five U2 songs to have been played at every concert since their introduction (the other three being "One", "Vertigo", and "").

The photographs used for the album cover and interior art were taken by in the Roissy Hall 2F of the in Paris, France. Portions of the for "Beautiful Day" were also filmed there.

The album cover contains a subtle religious message in the departure gate sign on the left edge of the photo. In early press ads for the album, the sign reads "F21-36". On the finished album artwork, however, it has been changed to "J33-3 →". Bono made the change at the last minute, stating that it refers to the Bible verse Jeremiah 33:3, "Call to me and I will answer you, and will tell you great and hidden things that you have not known." (ESV) In Bono's words, "It was done like a piece of graffiti. It's known as 'God's telephone number.'" [Chris Heath, "U2: Band of the Year," "Rolling Stone", 18 January 2001]

tracklist|
total_length = 49:23
all_writing = U2, with lyrics by Bono, except where noted

In , , and the UK, "The Ground Beneath Her Feet" (3:44) is a bonus track at the end. The lyric was written by , and he features in the video, shown writing the song. Rushdie also provides an account of his relationship with the band and how the song came to be written in his book of essays, "Step Across This Line".

Various limited edition copies included a bonus disc with either "Always," "Summer Rain," or "Big Girls are Best". The "" was subsequently released in the U.S., collecting these B-sides previously unavailable in that region.