In the 1990s, Louis Walsh decided to create an Irish version of Take That, which the papers picked up on when Walsh advertised the open auditions. The band created was Boyzone whom Walsh managed to international success achieving 16 top three singles, six of which were Number 1s, as well as four Number 1 albums selling over 20 million copies worldwide. When Ronan Keating announced he wanted to take a break from Boyzone, Walsh continued to manage his career. Keating achieved a Number 1 hit with Life is a Rollercoaster in 2000 while his album sold 4.4 million copies. Keating and Walsh later agreed to part company as Keating's solo career reached an all time high. Walsh then went back to the boy band formula to create Westlife, which Ronan Keating co-managed with Walsh for the first couple of Westlife's number 1 singles and albums.

Walsh's first television work was in 2001, in the Irish version of Popstars. The following year Walsh appeared as a judge on the UK ITV show Popstars: The Rivals with Pete Waterman and Geri Halliwell. Walsh went head-to-head with Waterman on the show with his girlband Girls Aloud battling it out with Waterman's boy band One True Voice. Girls Aloud lost to One True Voice, but their debut single "Sound of the Underground" reached Number 1 in the UK. Walsh managed the band to achieve a million singles sales while their debut album went platinum. Walsh also frequently appears on various talent shows on RTÉ in Ireland, the latest being You're A Star. He also covered for Simon Cowell as a judge on Britain's Got Talent during the Birmingham auditions on 3 and 4 February 2010 due to Cowell being ill. He again filled in for David Hasselhoff at the London auditions in the following series when Hasselhoff was unavailable. 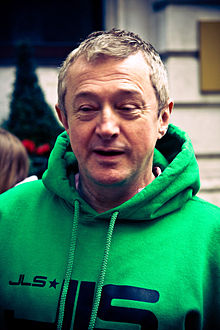 Walsh appeared from 2004 as a judge, along with Simon Cowell and Sharon Osbourne on ITV talent show,[4] The X Factor. In 2004, Walsh found chart success with G4, who went on to have a chart topping album and completed two tours of the UK. In 2005 Walsh managed the winner Shayne Ward, whose debut single "That's My Goal" spent four weeks at UK number one.

In November 2005, Walsh quit the show mid-series out of protest regarding his treatment on the show; the most explicit example being Sharon Osbourne drenching him with drinking water during a live recording.[5] Walsh returned on the Saturday evening's live show, stating that he could not abandon his remaining competitor and eventual winner, Shayne Ward. Ward went on to win the competition with over 10 million votes in the final. Walsh then went on to win The X Factor: Battle of the Stars with actress Lucy Benjamin.

ITV announced in March 2007 that Walsh would not return as a judge on The X Factor, but would remain behind the scenes managing some acts from the show.[6] According to UK tabloid newspaper The Sun, the decision to be replaced with two other judges came as a shock to him. However, on 22 June 2007, it was confirmed by Walsh that he would be returning as a judge on the fourth series of The X Factor.

Simon Cowell reportedly told Walsh off for his comments about the Spice Girls. Walsh had said that the girl group were "past their sell-by date" and lacking in talent, but Cowell already had plans to book the girls on the show.[7]

In 2008, Walsh returned for the fifth series along with Cowell, Dannii Minogue and Cheryl Cole who replaced Osbourne after Osbourne quit in June. In this series, Walsh mentored the groups, choosing JLS, Girlband and Bad Lashes to represent him in the live shows. Bad Lashes and Girlband were the first two acts to be eliminated over the first two weeks, but JLS finished as runners-up.

Walsh returned to the sixth series show in 2009, again mentoring the groups for the fourth time in six years. Walsh took Kandy Rain, Miss Frank and John & Edward to the live shows. Kandy Rain were eliminated in the first live results show, which Walsh was absent from because of the sudden death of Boyzone member Stephen Gately and was absent again on the Saturday and Sunday of week 2 due to Gately's funeral on 17 October. In week 3, Miss Frank were eliminated from the competition and John & Edward were eliminated in week 7.

In 2010, Walsh mentored the Over 28s category on the seventh series of The X Factor. His last surviving act, Mary Byrne, was eliminated in the semi-final on 5 December 2010.[8]

Walsh manages and has managed many singers and groups, including:

Despite the bitter feud mentioned previously,[clarification needed] Walsh had a public reconciliation with Boyzone, including Ronan Keating, on the ITV2 programme Ghosthunting with Louis Walsh and Boyzone in which they explored a network of subterranean streets beneath Edinburgh. On 10 October 2009, Gately died in his sleep at the age of 33. Walsh commented: "I'm in complete shock. I was only with him on Monday at an awards ceremony. We don't know much about what's happened yet. I only heard after The X Factor and we will rally around each other this week. He was a great man."[10]