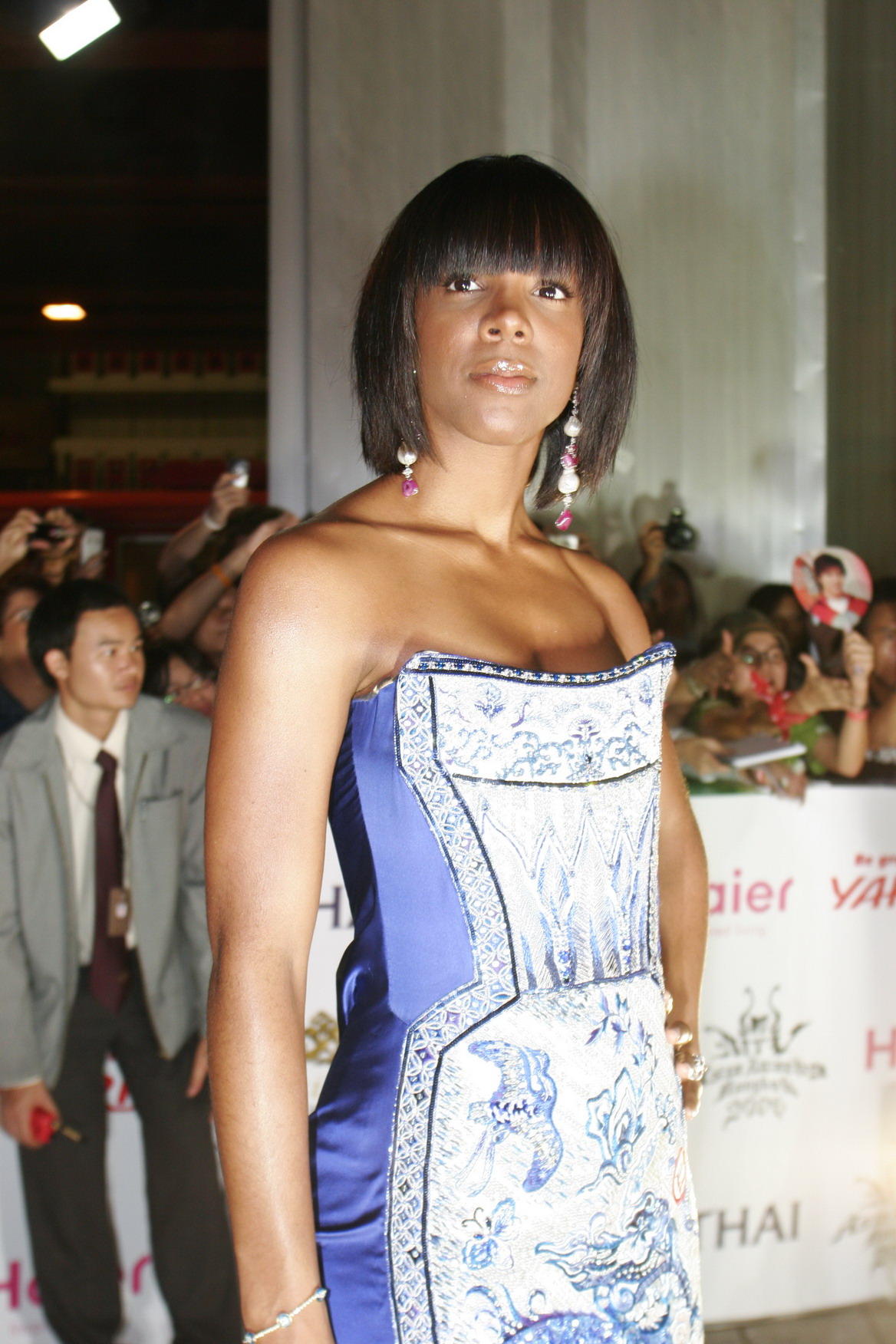 After a series of commercially successful releases with the group and a worldwide number-one success with rapper and "Dilemma," Rowland released her -influenced solo album "" in 2002. The album became a commercial success, eventually selling more than two million copies woldwide, and garnered three more or less successful singles, among "Stole."

While maintaining a recording career Rowland has also gained fame for starring in several film and television productions, including a starring role in the 2004 "", a supporting role in the 2003 "", and several guest appearances on TV series such as "" and "".

Rowland was born Kelendria Trene Rowland in , the daughter of Doris Rowland Garrison and Christopher Lovett, who were married after Kelly was born. [ [http://findarticles.com/p/articles/mi_m1077/is_11_62/ai_n19480186 Moving forward by giving back: helping others can change lives. I know this firsthand, for acts of kindness made a big difference in my life | Ebony | Find Articles at BNET.com ] ] When she was seven, her mother took her and left her father, who was an . [ [http://www.starpulse.com/news/index.php/2007/05/21/ May 2007, 21Starpulse Entertainment News Blog ] ] [ [http://www.serenakim.com/?page_id=16 Serena Kim | Storyteller » VIXEN MAGAZINE ] ]

At the age of eight, Rowland relocated to , , where she was placed into a rapping and dancing group, along with her friends and . Originally named Girl's Tyme,

To manage the group, Beyoncé's father resigned in 1995 from his job as a medical-equipment salesman. [Cite web |last=Tyrangiel |first=Josh |title=Destiny's Adult |url=http://www.time.com/time/magazine/article/0,9171,1005114,00.html |work=TIME |date= 2003-06-30 |accessdate=2008-04-12] He dedicated his time and established a "boot camp" for their training. The move reduced Knowles family's income by half and her parents separated because of the pressure.

Taken from a passage in the Biblical , the group changed their name to Destiny's Child in 1993. Together, they performed in local events and, after four years on the road, the group was signed to in late 1997. That same year, Destiny's Child recorded their major label debut song, "Killing Time", for the soundtrack to the 1997 film, "Men in Black".

The following year, the group released their self-titled debut album, spawning hits such as "No, No, No". That album made it possible for Destiny’s Child to win three awards from the Soul Train Lady of Soul Awards. The group rose to stardom after releasing their multi-platinum second album, "", in 1999. The record features some of the group’s most widely-known songs such as "", ", and "". "Say My Name" was nominated for and won the Best R&B Performance by a Duo or Group with Vocals and the Best R&B Song at the 2001 Grammy Awards. "The Writing's on the Wall" sold more than seven million copies, essentially becoming their breakthrough album.

Along with their commercial successes, the group became entangled in much-publicized turmoil involving the filing of a lawsuit by Luckett and Roberson for breach of contract. The issue was heightened after and appeared on the video of "Say My Name", implying that Luckett and Roberson had already been replaced. Eventually, Luckett and Roberson left the group. Franklin would eventually fade from the group after five months, as evidenced by her absences during promotional appearances and concerts. She attributed her departure to negative vibes in the group resulting from the strife.

After settling on their final lineup, the trio recorded "", which appeared on the soundtrack to the 2000 film, "Charlie's Angels". It became their best-charting single, topping the official U.S. singles chart for eleven consecutive weeks. The success cemented the new lineup and skyrocketed them to fame. Later that year, Luckett and Roberson withdrew their case against their now-former band mates, while maintaining the suit against Mathew, which ended in both sides agreeing to stop public disparaging.

Destiny's Child's third album, "Survivor", channels the turmoil they underwent, spawning its lead single of the same name, which was a response to the experience. [Cite news |last=Hiatt |first=Brian |title=Destiny's Child Use Turmoil To Fuel New LP |url=http://www.mtv.com/news/articles/1435986/20010108/destinys_child.jhtml |work=MTV News |date=() |accessdate=2008-04-01] The themes of "Survivor", however, caused Luckett and Roberson to refile their lawsuit; the proceedings were eventually settled in June 2002. Meanwhile, the album was released in May 2001, debuting at number one on U.S. "Billboard" 200 with 663,000 units sold.

Rowland's first solo album, "" was released in October 2002 domestically and February 2003 internationally. The album featured a range of "alternative R&B music", widely influenced by rock and , and yielded the BAM & Ryan number-one hit "Dilemma", a Grammy-winning ("Best Rap/Sung Collaboration" in 2003) duet with rapper , which eventually spent ten weeks on top of the U.S. "Billboard" . Other production was among contributed by Brandy, , Robert "Big Bert" Smith, , , , Damon Elliot Leli and Sean Okundaye. While the album entered the top 10 on the majority of the charts it appeared on, peaked at number 12 on the , and eventually receiving a for more than 602,000 copies sold; "Simply Deep" reached number-one in the UK, where it was certified as a platinum seller and was moreover certified in , , , , , and and other countries.

Although its lead single "Stole" reached the top ten in several countries and peaked within the top five in the Australia, New Zealand and the UK, it never reached the top 20 on the "Billboard" chart. Follow-up song "" barely made it to the top 10 on most charts, but peaked at number 5 on the . The album's final single, "" received limited international release, and thus failed to chart or sell noticeably, apart from the UK, where it became Rowland's fourth top twenty solo hit.

In 2005, Rowland appeared on rapper 's song called "", which impacted radio in September 2005 and became another top 20 success for both artists in New Zealand, Finland, the United States, and the UK.

After a three-year journey that involved concentration on individual solo projects, Rowland rejoined Knowles and Williams for "", released in November 2004. The album hit number two on the "Billboard" 200, and spawned "", "Soldier", "Girl", and "" as notable mainstream records. [Cite news |last=Whitmire |first=Margo |title=Eminem Thankful To Remain No. 1 |url=http://www.billboard.com/bbcom/search/google/article_display.jsp?vnu_content_id=1000726418 |work=Billboard |publisher=Nielsen Business Media, Inc |date=() |accessdate=2008-04-01] In support of the album, Destiny's Child embarked on the 2005 "" world tour, which started in April and ran through September. On the , visit, the group announced their disbandment after the end of their final North American leg. [Cite news |last=Cohen |first=Jonathan |title=Destiny's Child To Split After Fall Tour |url=http://www.billboard.com/bbcom/search/google/article_display.jsp?vnu_content_id=1000955328 |work=Billboard |publisher=Nielsen Business Media, Inc |date=() |accessdate=2008-04-01] In October 2005, the group released a , entitled "#1's", including all of Destiny's Child's number-one hits and most of their well-known songs. The greatest hits collection also includes three new tracks, including "". Destiny's Child was honored with a star on the in March 2006. [cite web |title=Beyonce Knowles |url=http://www.time.com/time/specials/2007/time100walkup/article/0,28804,1611030_1610841_1609748,00.html |work=TIME |accessdate=2008-04-12] [Cite news |last=Keller |first=Julie |title=Destiny's World Domination |url=http://music.yahoo.com/read/news/23584356 |work= |date=() |accessdate=2006-12-28]

Rowland had been working on her second solo album on and off since 2004. Originally entitled "My Story", the album's first version was actually scheduled for a release on June 6, 2006 and involving main production by , Big Tank, Patrick "J. Que" Smith, and guests , , and .

Rowland branched into acting with her roles in the 2003 summer blockbuster "" and in the 2004 independent film "The SeatFiller" co-starring "" actor , it released on DVD and VHS on February 21, 2006. She has also appeared on sitcoms, "", "Eve", and "" and on an episode of the Nickelodeon children's comedy "Taina". Rowland has also made television appearances on "" as of sing her version of "No Where To Run" and "Born to Diva" in 2003, 's MTV series "Wild n Out" in 2006 and has guest hosted on daytime talk show "".

Rowland, along with other recording artists such as , , Eve, , , ex- guitarist , joined actresses , , and in ads for "empowerment tag" for the ALDO Fights campaign. [Kelly Rowland, "Know what's going on in you, get tested", [http://www.youthaids-aldo.org Aldo Fight AIDS] ,] The tags, worn as necklaces or bracelets, go on sale at ALDO stores March 1 and benefit the YouthAIDS initiative.

In 2007, Rowland, along with stars such as and the cast of the hit show "" autographed pink Goody Ouchless brushes. The brushes were made available for auction on Ebay with all proceeds going to Breast Cancer Awareness. In addition Rowland teamed up with , and and , , and Nike to raise awareness about AIDS. Rowland was featured on a BET program, an MTV website, and designed a Nike sneaker for auction on with all proceeds going to AIDS Awareness.

Rowland, Beyoncé Knowles, along with Mathew Knowles, Tina Knowles and announced the formation of the Survivor Foundation, a charitable entity set up for the purpose of providing transitional housing for victims and storm evacuees in the , area. The Survivor Foundation extends the philanthropic mission of the "Knowles-Rowland Center For Youth", a multi-purpose community outreach facility in downtown Houston. [" [http://www.finanznachrichten.de/nachrichten-2005-09/artikel-5353786.asp The Survivor Foundation Established by Knowles and Rowland Families to Provide Transitional Housing for Hurricane Evacuees] ", Nachrichten, September 17, 2005]

These are the awards won by American R&B singer . (Note: this does not include 's award wins.)