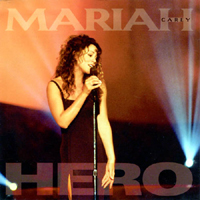 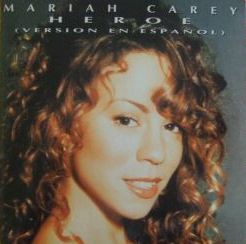 "Hero" is a song written and produced by American singer and , and recorded for Carey's fourth album, "Music Box" (1993). Its protagonist declares that even though we may feel discouraged or down at times, in reality we are "heroes" if we look inside ourselves and see our own inner strength; in time, this will help us "find the way". It was released as the album's second single in the fourth quarter of 1993 (see ) and became a worldwide commercial success. "Hero" is considered one of Carey's s, and she regularly performs it when invited to charity events and closes most concerts with it, it is also known for being one of the most frequently performed songs at her concerts next to "". The song was nominated for the 1995 for "Best Female Pop Vocal Performance", losing to 's "All I Wanna Do". "Hero" won two Rhythm & Soul Music Awards, one ASCAP Pop Music Award and one BMI Pop Award for the Songwriter Award.

and starred in a movie for called Hero. Producer recalls, "The people over at Epic Records were going to do the soundtrack for the film. They wanted to have Mariah sing the theme to it, but they didn't really think they could because at that time you couldn't get near Mariah to do anything film-wise. So they wanted to try the next best thing, which was to have us write something."

The film was screened for Afanasieff in Los Angeles and he was told that would probably be asked to sing a title theme. At the time, the producer was working with Carey on her Music Box album. "I went to New York and we were in the studio and came to a break. I was sitting at the piano and told Mariah about this movie. Within two hours, we had this incredible seed for this song, 'Hero.' It was never meant for Mariah to sing. In her mind, we were writing a song for Gloria Estefan for this movie. And we went into an area that Mariah didn't really go into - in her words, it was a little bit too schmaltzy or too pop ballady or too old-fashioned as far as melody and lyrics."

The pair was almost finished writing the song when , president and COO of and Carey's fiance (later her husband), walked into the studio. Hearing the song they were working on, he asked them what it was, and Carey replied, "This is a song for the film Hero." Afanasieff recalls Mottola responding, "Are you kidding me? You can't give this song to this movie. This is too good. Mariah, you have to take this song. You have to do it."

Initially, Carey was guided by the subject of the film, but Afanasieff acknowledges that the artist made it a very personal song. After she decided not to give the song away, she completed the lyric and made it her own. The producer went back to the soundtrack people and told them, "You know what? I didn't come up with anything." Estefan never heard the tune originally meant for her, and the song that ended up in the soundtrack was "Heart Of A Hero," written, produced and recorded by .

Afanasieff and Carey came up with a couple of different versions of "Hero" in the studio. "There was a simpler performance on tape and a more difficult one, with Mariah singing out more, with more licks. But we chose a happy medium. The song really calls for not anything really fancy. But she's always fighting the forces inside of her because she's her own devil's advocate. She wants to do something that's so over the top and use her talents and the voice she has. But she also knows she has to restrain herself and do what the music really calls for. [ [http://www.mariahdaily.com/infozone/storybehindno1s.shtml#hero "Hero" inside story ] ] [ [http://www.songfacts.com/detail.php?id=1556 Hero by Mariah Carey Songfacts ] ]

"Hero" was the subject of one of the most infamous copyright cases of all time. Christopher Selletti, a former limo driver for , said that the lyrics were based on a poem that he showed Stone in 1991 (and that he believed Stone had shown to Carey). Carey defended herself with entries from her personal lyrics notebook, but the lyrics from the notebook were dated six weeks after the release of the film "Hero". The $20 million lawsuit was eventually dismissed, and Selletti was forced to pay a fine to Carey. Years later Selleti launched a second lawsuit, which was also dismissed, but he has stated that he will try a third time. [" 'Mariah Carey's 'Hero': The Envelope Please'." Friedman, Roger. "Mariah Carey's 'Hero': The Envelope Please". (Tuesday, , ).]

"Hero" became Carey's eighth number-one single on the U.S "Billboard" Hot 100, and it was her first Christmas number-one on the chart. It reached number one in its tenth week and spent four weeks at the top, from to . It replaced "Again" by , and was replaced by , and Sting's "All for Love". It remained in the top forty for twenty-five weeks, with fourteen of those spent in the top ten. It received heavy radio airplay and was certified platinum by the RIAA. It was one of the year's biggest hits, being ranked fifth on the Hot 100 1994 year-end chart. [http://www.billboard.com/bbcom/charts/yearend_chart_display.jsp?f=The+Billboard+Hot+100&g=Year-end+Singles&year=1994 Billboard Hot 100 year-end]

"Hero" became a major hit outside the U.S., reaching the top ten in the UK (where it peaked higher than "", the previous single from "Music Box") , and . It became Carey's first number-one in since her debut single, "" (1990), and was a radio hit there. It was more successful across than "Dreamlover" by reaching the top ten in most markets, but it performed moderately in compared to Carey's previous singles. "Hero" was certified platinum in Australia by ARIA, gold in by RIANZ and silver in France by IFOP.

Music video and other versions

The single's video, directed by , is derived from Carey's 1993 concert at Proctor Theatre, which became a television special and was later released on the home video "" (1994). The live performance of the song at Proctor Theatre was officially released. The video is included on Mariah's DVD #1's (1998).

Carey also re-recorded "Hero" in Spanish from a translation by Jorge Luis Piloto [ [http://www.mariahmariah.com/info/letras/musicbox/heroe.htm :: MariahMariah.com :: Héroe (Hero Spanish Version) Lyrics :: Mariah Carey :: ] ] , which was Carey's first Spanish song. Critics thought that her pronunciation wasn't right and the adaptation is unworthy to the original version, the spanish speaking public criticized it for being mediocre both in pronunciation and lyrical content. The Spanish language version of "Hero" ("Héroe") was included as a on various Carey singles released outside the U.S. between 1994 and 1997, and it was included on the Mexican, Argentinian and Spanish edition of Music Box as a bonus track. [ [http://spanishcharts.com/showitem.asp?interpret=Mariah+Carey&titel=Music+Box&cat=a spanishcharts.com - Mariah Carey - Music Box ] ] "Héroe" was released in 1995 [ [http://www.billboard.com/bbcom/esearch/chart_display.jsp?cfi=363&cfgn=Singles&cfn=Hot+Latin+Songs&ci=3020496&cdi=6953119&cid=06%2F03%2F1995 Top Music Charts - Hot 100 - Billboard 200 - Music Genre Sales ] ] , and it achieved a huge success in Spain and also reaching the top ten in several countries.

One of Carey's most widely seen performances of "Hero" was at the 2005 London concert, during which she sang the song with the African Children's Choir. [ [http://www.mcarchives.com/news/spec.asp?id=4803 Mariah at Live 8 - The Mariah Carey Archives ] ] Later that year a cover of the song by vocal group was released on their album "".

Carey sang "Hero" with at the 1999 "Pavarotti and Friends" concert. [ [http://www.mcarchives.com/discography/spec.asp?id=pavarottifriends The Mariah Carey Archives ] ]

Michael Ball did a cover version for his 'One Voice' album.