Infobox Single
Name = When You Believe 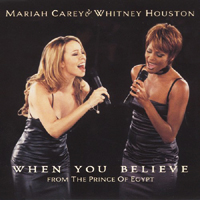 
Lower caption = Alternate cover for "When You Believe"

"When You Believe" is an -winning song composed by Stephen Schwartz for the animated feature "". A pop version of "When You Believe" was produced as a single with additional music by writer-producer for the film's soundtrack album. It was the main theme of the film and was released as a single by American s and as the soundtrack's first single in 1998 (see ); it was also the first single from Houston's album "" and the second from Carey's compilation album "#1's". A 're-worked' version of "When You Believe" was the coronation song and debut single by the winner of the fourth series of "The X Factor", , and the British Christmas Number One of 2007. The first 18 notes of the song are the same as those of the Chinese composition "".

In the film, this song of inspiration is performed by the characters () and (sung by ). The protagonists of this recall tough times that have them questioning their faith: they have prayed for many nights to but those prayers seem to remain unanswered, and they wonder if they are wasting their time. Nevertheless, they realize that although times may be difficult, "there can be miracles when you believe" in God.

For the commercial pop single, Babyface was enlisted as the song's producer to make it more friendly to pop markets. The major change was that the section of the song featuring a children's Hebrew choir was removed and replaced with a new bridge.

The single's video was filmed at the [ [http://www.mtv.com/news/articles/1426944/19981029/story.jhtml News - Articles - 1426944 - 19981029 ] ] and shows Houston and Carey in a dark studio accented by Egyptian settings, backdrops, and scenes inspired by "The Prince of Egypt". An audience is on hand to emulate a concert like setting. Occasionally, home video clips of Mariah and Whitney appear throughout the video. The video ends as the room is illuminated, and the two singers are joined by a large choir. A few variations of the song exist, including an extended version with a longer intro and bridge which can be found on "The Prince of Egypt" soundtrack, a television track, and an instrumental version.

Conflict arose between Stephen Schwartz and Babyface after Schwartz left Babyface's name off the submission sheet for the Academy Awards when the song had been nominated for "Best Original Song". Schwartz had argued that Babyface should not receive Oscar credit as his version of the song (with Houston and Carey) contained additional musical elements (such as the new bridge) which had not been part of the original as heard in the film. Houston and Carey performed Babyface's version of the song live at the Academy Awards ceremony in 1999; however, only Schwartz was awarded the Oscar.

Years of media speculation of a feud between Houston and Carey led to expectations that a duet would be a great hit and break many chart records, especially as they were successive record-holders for a single with the most weeks at number one. Although a hit, "When You Believe" didn't make the Top 10 as expected, peaking at #15 on the U.S. chart. It fitted a trend of Carey singles during this period of high sales and low airplay, and most of Houston's singles before and after the release of "When You Believe" were far more successful. It remained on the Hot 100 for nineteen weeks and reached the top five on Billboard's Adult Contemporary chart, and it was both Houston and Carey's first single to appear on the new chart. It was certified gold by the RIAA, and did make the Hot 100 1999 year-end charts, coming in at number ninety-nine.

The single was even more successful outside the U.S., as it reached #1 in , the top five in the and most of , and like America, was a top twenty success in .

On American Idol's Season 7, performed his version on the show on . A studio-recorded version is available.

In Week 9 of I'd Do Anything, the song was performed by Manx entrant .

member, covered it for her self-titled album as she asked if she could record it.