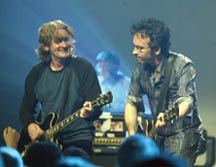 The Saw Doctors are a band from , in the west of . Taking their name from itinerant craftsmen who once traveled from sawmill to sawmill sharpening and repairing saws, the Saw Doctors have a fervent following, especially in Ireland and among Irish-Americans in the . They hold the record for Ireland's biggest-selling single of all time, "," [ [http://www.rte.ie/arts/2008/0111/sawdoctors.html RTÉ.ie Entertainment: Saw Doctors to be honoured at Meteors ] ] which topped the Irish charts for nine weeks in 1990.

The Saw Doctors were formed in 1986 by (a former member of defunct Tuam outfit Too Much for the White Man), (formerly a songwriter and guitarist with short-lived Tuam punk band ), and local vocalist Mary O'Connor. The trio got their start playing small gigs in local venues such as Tuam's Imperial Hotel. O'Connor left the fledgling Saw Doctors the following year to emigrate to ; Carton and Moran added other musicians and carried on with the band.

The Saw Doctors rose to gain national attention during 1987 and 1988 as they toured in support of popular Irish bands such as the and ; they also proved a major hit when they played at the 1988 . In the spring of 1988, when The Saw Doctors were playing a six-week residency at the Quays Bar, Galway, their energetic live show attracted the attention of the , who were then recording their "" album in nearby . Pub sessions and budding friendships among the two groups would prove fruitful for the Saw Doctors' future, and would see eventual crossovers between the two groups. The band's current bass player, , and former drummer, Fran Breen, have both been members of the Waterboys.

In the fall of 1988, The Saw Doctors filmed a satirical "" on a flat-bed truck while driving between and . A parody of 's newly released "" film, in which U2 play 's "All Along the Watchtower" from a flat-bed truck in , The Saw Doctors' "Crackle and Buzz" had its "world premiere" at the Claddagh Palace Cinema in . The Saw Doctors played live from the cinema's balcony, parodying the short acoustic set U2 played atop the Savoy Cinema on when "Rattle and Hum" premiered there on , . Footage from the tongue-in-cheek stunt was featured on 's main evening news.

In late 1988 and early 1989, The Saw Doctors accompanied the Waterboys on tours of and the UK. In August 1989, Waterboys' frontman Mike Scott produced the band's first single, "N17," a song about an Irish emigrant longing to be driving on the trunk road that connects with the Saw Doctors' hometown of . Although "N17" did not chart upon its original release, the band's barnstorming live performances over the next year, particularly their appearance at the inaugural 1990 Féile music festival in , , cemented their reputation as a formidable live act.

Following their success at Féile, the band released their second single, "," a humorously off-colour paean to an . The single topped the Irish charts in September 1990 and spent nine weeks at number one, becoming Ireland's best-selling single of all time, a record it still holds. A re-released "N17" reached number one in the Irish charts at 1990, and the following year, the band's debut album "If This Is Rock and Roll, I Want My Old Job Back" entered the Irish album charts at number one.

At the 2008 Meteor Irish Music Awards they received the Lifetime Achievement Award.

The band is often compared with American singer-songwriter due to their frequent invocation of local atmosphere, haunts, and characters, and their penchant for singing about ordinary people's lives in economically difficult times. Some Saw Doctors songs take autobiographical youthful memories -- of an attractive schoolgirl from the local Catholic boarding school ("Presentation Boarder"), of a missed opportunity to score a goal in a game ("Broke My Heart"), of driving with a father while he points out local landmarks ("Galway and Mayo"), of first love ("Red Cortina"), of clumsy teenage seduction ("D'ya Wanna Hear My Guitar?"), of dreary Irish summers ("Will it Ever Stop Raining?"), or of farmers' harvest banter ("Hay Wrap") -- and weave them into wry but often touching portraits of rural Irish life. Other songs, written from more mature, serious perspectives, explore themes such as depression and desperation ("Same Oul' Town," "Sing a Powerful Song," "To Win Just Once"); emigrant longings for home ("", "The Green and Red of Mayo," "Midnight Express," "Going Home"); and cravings for adult love, acceptance, and togetherness ("Share the Darkness," "," "Wake up Sleeping").

Davy Carton has explained the blend of sadness and exuberance in many Saw Doctors' songs, saying "There has to be a dark side because there's a dark side to life. We see that, but we're kind of cynical optimists, I suppose. I look at myself that way. You always like to see the bright things. That's the uplift in it" (Interview, "The Boston Globe," April 20, 1997).The Saw Doctors' have often been controversially anti-clerical, as when they appeared on the 1991 IRMA Awards (broadcast on live television) with Carton dressed as a priest and the remaining band members dressed as altar boys. Sparkling with mischief and sexual frisson, the band's songs often portray the clergy as priggish killjoys or sanctimonious hypocrites. "Tommy K" commemorates the late Tuam DJ Tommy Kavanagh (former breakfast DJ on Galway's "Super Pirate" County Sound Radio in the 1980s), whom a condemned publicly for holding a disco during , a time when Catholics were traditionally forbidden from attending parties and dances. "I Useta Lover" roguishly rhymes "mass" with "ass" as the kneeling singer admires his prospective paramour from behind as she goes up to receive . "Bless Me, Father" parodies Catholic with its saucy lyric "Bless me, Father, for I have sinned / She had big brown eyes and silky skin / Bless me, Father, I couldn't resist / Oh, Father, you have no idea what you've missed." And "Howya Julia," a song about disgraced former Bishop of Galway , a staunch defender of priestly who in 1992 was discovered to have fathered a child some eighteen years previously with American divorcée Annie Murphy, confronts the with its moral hypocrisy. The song's chorus ("Oh, mighty, mighty Lord almighty / It's off with the collar and off with the nightie / Jesus, Mary, and holy Saint Joseph / The beads are rattling now") combines cutting criticism with the Saw Doctors' typically effervescent humor.

On recent albums "Villains" and "The Cure," the Saw Doctors' longstanding affection for their native land has led them to criticize the country's economic boom. Commenting on how the manic construction of highways and gaudy new houses throughout the Irish countryside disrespects land and ancestry, "Out for a Smoke" features the lyrics "The bones of our ancestors / Are buried in the field behind the shed / They could be lying there oblivious / Underneath cement before I'm dead." Given the band's deep feeling for the landscape and local history of western Ireland, such sentiments are not surprising. But having chronicled an era of economic depression, poverty, and emigration, the Saw Doctors find themselves in the ironic position of being unable to approve, either, of how "the good times" are changing their country's social and cultural fabric.

Although the Saw Doctors have released only six studio albums over their two-decade career, their sparkling live shows have brought them international renown, and on occasion have seen them upstage bigger-name acts at music festivals. In 2004, the band recorded its exuberant live show before an enthusiastic sold-out crowd at the Black Box Theatre, Galway, and released a live audio CD and a concert DVD, both titled "Live in Galway". The DVD also contains a 50-minute documentary, "A Different Kind of World," following the Saw Doctors around their favourite locales in the West of Ireland (including a trip to ) and showing them on tour in , New York. A follow-up live album, "New Year's Day," again features the band in the Black Box Theatre, Galway, this time on New Year's Day 2005. The band donated profits from this album to victims of .

The band performed three songs at , on , before 's match with .

They will be appearing at this years in August

The Saw Doctors' song "She Says" is used as the to the comedy series "". Under the name "The Folk Footballers," Leo Moran and former Saw Doctor Padraig Stevens released "The First Fifteen," a collection of songs that celebrate the Galway football team in the wake of its success in the 1998 . Re-released in 2001, when Galway again won the All-Ireland football championship, the album includes a host of Tuam talent on many of its songs. Further collaborations brought a self-titled album by another side-project band, "The Shambles." used the Saw Doctors song "Never Mind the Strangers" in a multi-million dollar ad campaign for in the . The Saw Doctors made a film appearance in Walter Foote's directorial debut, "The Tavern." The song "Same Oul' Town" is featured in the film. The Saw Doctors are appeared on the 2007 Christmas special.

The Saw Doctors have a rabid international fan base that has been compared to that of the . Fueled by those in Ireland as well as those of Irish descent in the US, UK, and elsewhere, this unofficial fan club prides itself on seeing the Docs live as many times as possible. They meet online in a forum on the band's website and enjoy an interesting global ongoing conversation about the band.

A Saw Doctor wins the lottery

In April 1993, the Saw Doctors' keyboard and accordion player Tony Lambert, who had previously played with and , won £852,000 (s), or approximately €1 million () in today's currency, when he hit the jackpot in the 's Lotto game. Lambert, who at the time was living in a converted bus that he had driven from his native to Galway and parked just off the N17 road, had purchased his winning ticket in a local shop. After his win, he left the band and settled in , where he restored an old house and built his own recording studio. Tony now lives in Thailand.

Coincidentally, the Saw Doctors' song "To Win Just Once" was written and recorded shortly before Lambert hit the Lotto jackpot. It is the only song on the "Same Oul' Town" album that features his musicianship.