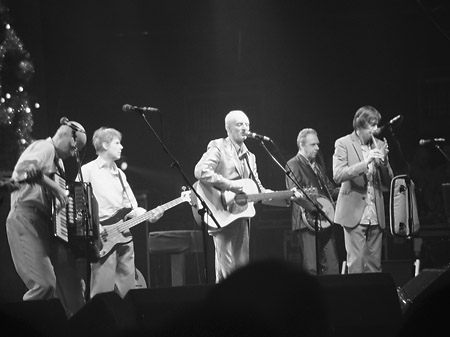 The Pogues are a band of mixed Irish and English background, playing with influences from , formed in 1982 and fronted by . They reached international prominence in the 1980s and early 1990s, until MacGowan left the band in 1991 due to drinking problems. They continued with first and then on vocals before breaking up in 1996.

Their politically-tinged music was influenced by , [ [http://wm01.allmusic.com/cg/amg.dll?p=amg&sql=11:0iftxqr5ldhe~T1 allmusic ((( The Pogues > Biography ))) ] ] yet used traditional Irish instruments such as the , , , , , and others. In the later incarnations of the band, after the departure of Shane MacGowan, rock instruments such as the electric guitar would become more prominent. The first of The Pogues' albums, "", borrows much from the punk tradition of MacGowan's previous band (later dubbed "The Nips").

The band specialised in , often playing with the energy of the scene in which several of the members had their roots.

The roots of The Pogues were formed when MacGowan (vocals), Peter "Spider" Stacy (), and () were together in an occasional band called The Millwall Chainsaws in the late 1970s after MacGowan and Stacy met in the toilets at a gig at in 1977. [ [http://www.guardian.co.uk/christmas2007/story/0,,2230870,00.html#article_continue Profile: Shane MacGowan | UK news | The Guardian ] ] MacGowan was already with The Nips, though when they broke up in 1980 he concentrated a bit more on the still unstructured Millwall Chainsaws, who changed their name to The New Republicans. During this period MacGowan and Finer auditioned unsuccessfully for a license to busk at Covent Garden. [ [http://www.kirstymaccoll.com/information/conn/f.htm Kirsty MacColl: Connections ] ] In 1982 () joined MacGowen, Stacy, and Finer, initially calling the band The Men They Couldn't Hang, before settling on Stacy's suggestion of Pogue Mahone. The new group played their first gig at The Pindar Of Wakefield on 4 October 1982. [ [http://www.pogues.com/PastPogues/SMacGowan/SMacGowan.html Shane MacGowan ] ]

They later added (bass) and (" on Stiff that October.

The band gained more attention when the UK Channel 4's influential music show "" made a video of their version of "" for the show. The performance - featuring Spider Stacy repeatedly smashing himself over the head with a beer tray (in the manner of Bob Blackman's infamous "Mule Train/Mule Tray") - became a favourite with the viewers, but Stiff refused to release it as a single, feeling it was too late for it to help "Red Roses for Me" (in fact their record label, Stiff, was by then in deep financial trouble). Nevertheless, it remained a favourite request for the show for many years.

() joined the group soon after, then with the aid of punk and New Wave forefather they recorded the follow up, "", in 1985. The album title is a famous comment falsely attributed to who was supposedly describing the "true" traditions of the British .

The band failed to take advantage of the momentum created by the strong artistic and commercial success of their second album. They first refused to record another album (offering up the four-track EP "" instead); O'Riordan married Costello and left the band, to be replaced by bassist Darryl Hunt; and they added a multi-instrumentalist in , formerly of . Looming over the band at this period (as throughout their entire career) was the increasingly erratic behaviour of their vocalist and principal songwriter, Shane MacGowan. Their record label, , went bankrupt soon after the 1987 release of the single "The Irish Rover" (with ).

The band remained stable enough to record "" in 1988 (with its Christmas hit duet with "", which was voted "the best Christmas song ever" in polls in 2004) and 1989's "Peace and Love". [ [http://top40-charts.com/news.php?nid=12018 Fairytale tops VH1 'Christmas song poll' @ Top40-Charts.com - 40 Top 20 & Top 40 Music Charts from 25 Countries ] ] The band was at the peak of its commercial success, with both albums making the top 5 in the UK (numbers 3 and 5 respectively), but MacGowan was increasingly unreliable. He failed to turn up for the opening dates of their 1988 tour of America, and prevented the band from promoting their next album, "", so in 1991 the band sacked him. [ [http://wm02.allmusic.com/cg/amg.dll?p=amg&sql=11:0iftxqr5ldhe~T1 allmusic ((( The Pogues > Biography ))) ] ] Vocal duties were for a time handled by , before Stacy finally took over permanently. After Strummer's departure, the remaining seven Pogues recorded "Waiting for Herb", which contained the band's third and final top twenty single, "Tuesday Morning", which became their best-selling single internationally. Terry Woods and James Fearnley then left the band and were replaced by David Coulter and James McNally respectively. Within months of their departures, ill health forced Phil Chevron to leave the band; he was replaced by his former guitar technician, Jamie Clarke. This line up recorded the band's seventh (and final) studio album, "Pogue Mahone". The album was a commercial failure, and, following Jem Finer's decision to leave the band in 1996, the remaining members decided it was time to call it quits.

After the Pogues' break-up, the three remaining long-term members (Spider Stacy, Andrew Ranken and Darryl Hunt) started a new band called The Wisemen. The band played mainly new Stacy-penned tracks, though Darryl Hunt also contributed songs, and the band's live set included a few Pogues songs. First Ranken then Hunt left the band, the latter going on to become singer/songwriter in an indie band called Bish, whose self-titled debut album was released in 2001. Ranken has gone on to play with a number of other bands, including hKippers, The Municipal Waterboard and, most recently, The Mysterious Wheels. In addition to The Wisemen (later renamed The Vendettas), Spider Stacy continued to write and record music with various bands, including a short stint with "Spider Stacy's Pogue Mahone", with Stacy fronting Pogues , Boys from the County Hell. Shane MacGowan founded in 1992. His autobiography "", co-written with his journalist girlfriend Victoria Mary Clarke, was released in 2001. Jem Finer went into experimental music, playing a big part in a project known as "", a piece of music designed to play continuously for 1,000 years without repeating itself. In 2005, Finer released the album "Bum Steer" with DB Bob (as DM Bob and Country Jem). James Fearnley moved to the United States shortly before leaving the Pogues. Philip Chevron reformed his former band The Radiators. Terry Woods formed The Bucks with Ron Kavana, releasing the album "Dancin' To The Ceili Band" in 1994. Later, he formed The Woods Band, releasing the album "Music From The Four Corners of Hell" in 2002.

The band, including MacGowan, re-formed for a Christmas tour in 2001 and performed nine shows in the UK and Ireland in December 2004. In 2002 "Q" magazine named The Pogues as one of the "50 Bands To See Before You Die". In July 2005, the band — again including MacGowan — played at the annual Guilfest festival in Guildford before flying out to Japan where they played three dates. Japan is the last place they all played together before MacGowan was originally sacked in 1991, and they have a strong following there. They played a date in Spain in early September. The reunited Pogues played dates in the UK with support from the in late 2005, and re-released their 1987 Christmas classic "Fairytale of New York" on 19 December, which went straight in at #3 in the UK Singles charts on Christmas Day 2005, showing the song's enduring popularity. On 22 December 2005 the broadcast a live performance (recorded the previous week) on the Jonathan Ross Christmas show with filling in for the late , the first time the band had played the song live on television. The following week they performed live on the popular music show "".

Shane MacGowan wrote a blog for "" website in 2006, detailing his thoughts on the current tour. [cite web | title = Shane MacGowan | author = Shane MacGowan | url = http://blogs.guardian.co.uk/arts/author/shane_macgowan/ | publisher = Guardian Unlimited | accessdate = 2007-12-12] The band was awarded the lifetime achievement award at the annual in February 2006. In March 2006, the band played their first U.S. dates with Shane in over 15 years. The band played a series of sold-out concerts in , Atlantic City, , and New York. Later they played a series of highly acclaimed and sold out gigs during mid-October 2006 in , Las Vegas, and Los Angeles, and toured , , , London, , and in mid-December 2006. They began a second U.S. tour in March 2007, once again to coincide (and conclude) with a New York City show on . 2007 has proved to be the most prolific year of touring since the reunion. A tour of the west coast of America and eleven dates in the UK in December complement the headlining festival appearances made in the summer across Europe (Sweden, Belgium and Spain). They continue to be in huge demand, often selling out very large venues, despite criticism of selling out, and claims that arenas and festivals do not suit the band's sound.

Guitarist Phil Chevron has stated there were no plans to record new music or release a new album. Chevron said that one way to keep enjoying what they were doing was to avoid making a new album, although he did say that there still is a possibility in the future for new music, but certainly not in the near future. Terry Woods has commented that MacGowan has been writing, and most of it sounds good. However on the pages of The Pogues message board, Chevron revealed that The Pogues are preparing a box set of unreleased tracks for release in June 2008.

The band has received mixed reviews of its recent performances. Reviewing a March 2008 concert, The Washington Post described MacGowan as "puffy and paunchy," but said the singer "still has a banshee wail to beat Howard Dean's, and the singer's abrasive growl is all a band this marvelous needs to give its amphetamine-spiked take on Irish folk a focal point." The reviewer continued: "The set started off shaky, MacGowan singing of `goin' where streams of whiskey are flowin,' and looking like he'd arrived there already. He grew more lucid and powerful as the evening gathered steam, through two hours and 26 songs, mostly from the Pogues' first three (and best) albums." [ [http://www.washingtonpost.com/wp-dyn/content/article/2008/03/10/AR2008031002990_2.html PERFORMING ARTS - washingtonpost.com ] ]

"Fairytale of New York" was released as a single in 1987 and reached #1 in the Irish charts and #2 in the British charts over Christmas (the time of peak sales). The song has become a festive classic in the UK and Ireland over the years, and was voted the best Christmas song of all time three years running in 2004 [, 16 December 2004. " [http://news.bbc.co.uk/1/hi/entertainment/music/4101207.stm Pogues track wins Christmas poll] ". Retrieved 17 November 2005.] , 2005 [BBC News, 15 December 2005. " [http://news.bbc.co.uk/1/hi/entertainment/4533030.stm Fairytale still the festive pick] ". Retrieved 19 December 2005.] and 2006 in polls by music channel , despite not achieving when it was released. It was also voted as the 27th greatest song never to reach UK#1 in another VH1 poll, and also voted as the 84th greatest song of all time by listeners in their "Sold on Song" top 100 poll. In 2007 the record was briefly censored by the BBC because of the word "faggot" being deemed potentially offensive to gays. Following protests from listeners, including the mother of Kirsty MacColl, the censorship was lifted.