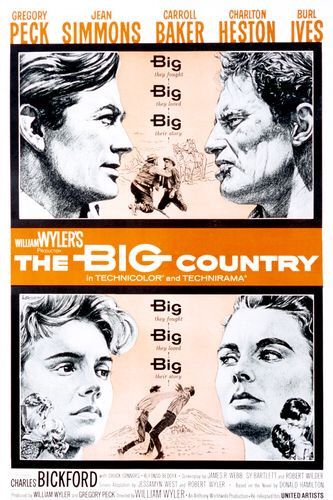 Ives won the Academy Award as Best Supporting Actor as well as the . The film was also nominated for an Academy Award for the musical score by .

Wealthy, newly retired sea captain and ship-owner James McKay () travels to the American west to rejoin his fiancée Patricia (), whom he had met out East, at the enormous ranch of her father, Major Terrill (). Terrill is a powerful rancher who is feuding with the equally tough patriarch of a poorer, uncouth, and less refined clan, Rufus Hannassey (). Patricia's best friend, schoolteacher Julie Maragon (), is caught between the two, as she is the owner of the "Big Muddy", a (smaller) big ranch with a vital source of water desired by both men; Hannassey desperately needs it for his cattle, while Terrill wants to gain control of it to bring his rival down.

McKay is a puzzle to Major Terrill, his foreman Steve Leech () and even his fiancee; he refuses to be provoked into proving his manhood, even when harassed. We learn that McKay's father died in a duel, and -- as McKay explains to Terrill -- no one could remember what the duel was about. One morning, McKay rides out alone, goes to the Big Muddy, and persuades Julie to sell him the ranch, promising her that both the Terrills and the Hannesseys will always have access to the river, hoping that this will defuse the conflict. She agrees to the sale.

Back at the Terrill ranch, everyone believes McKay is lost. A search party is organized and spends two days looking for him. When McKay shows up, and says he knew where he was all the time, Leech -- who is himself in love with Patricia -- calls him a liar in front of Patricia and the Major. McKay refuses to be goaded into a fight. In private, Patricia expresses her shame at what she sees as McKay's cowardice. McKay tells her he'll be moving into town in the morning, to give them both time to think things over. Early the next morning, McKay goes out to the bunkhouse to settle things with Leech. They fight away from the house, without witnesses, to an exhausted draw - which, as McKay points out, has solved precisely nothing. Leech gains a new respect for McKay.

Later, Patricia discovers from Julie that McKay has bought the Big Muddy, and goes into town to try to make up with him. However, when she mentions her father's plans for the Big Muddy, McKay tells her it's over, as he will have no part in continuing the feud. Patricia explodes with rage, telling him that he'll never be half the man her father is.

Terrill orders Leech and his men to drive the Hannassey's cattle away from watering at the Big Muddy. Hannassey, desperate, contrives a plot to kidnap Julie Maragon. Rufus offers to buy the Big Muddy in exchange for her freedom. He doesn't know whether to believe her when she tells him she has already sold the Big Muddy to McKay. Hannassey decides to keep her at the ranch, as the bait for an ambush he has prepared for Terrill and his men. To rescue Julie, they must pass through the narrow canyon leading up to the Hannassey homestead, where they can be easily gunned down.

McKay rides in alone, despite Terrill's opposition, to try seek a peaceful solution. Hannessey's eldest son Buck (), who wants Julie for himself, tells her to lie to McKay about her reason for being there, or he will shoot him. McKay arrives and shows Hannassey the deed to Big Muddy, and promises him access to the water there. When Hannassey says he intends to fight Terrill anyway, McKay confronts him with the truth - that it is all just about a personal vendetta between two ruthless, vicious old men who are willing to get a lot of others killed to settle their feud. Julie, whose feelings for McKay are by now obvious, tries to protect him by saying she is there willingly, but McKay doesn't believe her. McKay and Buck begin to fight, but Rufus stops it when Buck draws on an unarmed McKay. He then decides they will settle it "gentleman style", with the dueling pistols in McKay's saddlebag. He warns the two men that he'll shoot either one of them if they violate the rules.

After walking off ten paces, both men turn and aim. Buck fires before the signal, grazing McKay's forehead. McKay slowly and deliberately takes aim. Defenseless, Buck succumbs to fear and drops to the ground in terror. McKay then fires his shot into the dirt. Hannassey walks over and spits on his son for his humiliating cowardice. As McKay and Julie prepare to leave, Buck grabs a gun from a ranch hand, but Hannassey shoots and kills him.

Meantime, Terrill, Leech and their men have ridden into the ambush and are pinned down in the canyon. Acknowledging the truth of McKay's accusation, Hannassey orders his men to hold their fire. He then challenges Terrill to come out and face him man to man. The two men walk to a final showdown and kill each other. McKay and Julie ride out together.

Commentary on the Cold War

The Big Country came out during the and in the aftermath of the . The film depicts the two alternatives of diplomacy (taught by McKay) and brinksmanship and personal grudges leading to (Terrill and Hannessey). Moreover, The Big Country depicts McKay grudgingly earning the respect of others and of the audience. It is said that President showed the movie several times in the White House during his second administration.

Ives won the Academy Award as Best Supporting Actor as well as the . The film was also nominated for an Academy Award for the musical score by .

The main theme music was used in as the backing music to the song "I Want Your Love."