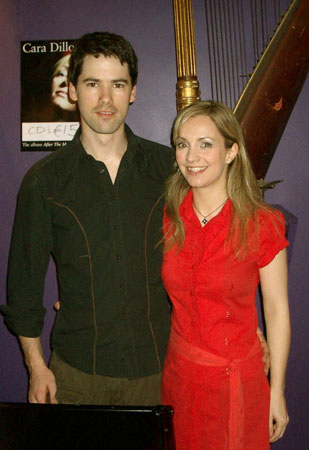 Dillon comes from an area steeped in Irish traditional music. Since she was a schoolgirl she has sung and performed. She learned local folk songs from teachers and workshops held in the town. She can also play the fiddle and whistles. At the age of fourteen she won the All Ireland Singing Trophy at Fleadh Cheoil na hÉireann. [Rough Trade Records Cara Dillon biography [http://www.roughtraderecords.com/index.html?cara_dillon.html] ]

In 1992 she formed a band called Oige (an Irish word meaning 'youth') with school friends Murrough and Ruardhrai O'Kane, bringing her take on Irish traditional songs to Ireland, Scotland and further afield. During this time she also performed with big names such as and . Oige recorded two albums with Dillon: a studio and a live album. "Inspiration" was recorded in 1992 to sell at concerts in Europe. The live album, simply called "Live", was recorded at a concert in in 1994. A cassette tape version also exists under the name "Live in Glasgow". Dillon left Oige in 1995 after being asked to replace in a so-called folk supergroup Equation; however, she guests on their second studio album, "Bang On", playing fiddles on the last track, "Maids Of Mitchelstown".

Equation comprised five members: Sean, Sam and , and Dillon. They signed a major record deal with (part of ) and recorded an album at 's in winter 1995-'96. The album, entitled "Return to Me", was produced by . There was a single release, "He Loves Me", with an accompanying promotional video. [MVDBase.com Music Video Database [http://www.mvdbase.com/video.php?id=9839] ] The band performed on and , but weeks before the release of the album the record label shelved it. It was not released in 1996, but in 2003 it saw a release under Rough Trade after (the band's former manager) bought its rights.

Dillon left Equation with original band member Sam Lakeman because of musical differences and together they immediately signed a separate deal with the same label. The duo was known as "Polar Star". During this time Dillon formed a strong musical partnership with Lakeman. They recorded several albums with top songwriters and producers in the UK and , but none of their work was released. The record label stated that the recordings showed no hit single potential. By 2000, Dillon had decided that she would never be able to give the label what they wanted. Circa 2000, Dillon and Lakeman ended their five year relationship with and signed to Indie label Rough Trade.

Dillon recorded her first album in The Firs, Lakeman's parents' house. There were also recordings made in , Ireland. The album was mixed by John Reynolds ( and ). It contained nine traditional songs Dillon had since her schooldays and also had two original songs "Blue Mountain River" (which became a single in her native land) and "I Wish I Was". The album was released on , to critical acclaim. The reaction to the album, according to Dillon, [Belfast Telegraph article "Oxford Street tunes into Cara's song" [http://www.belfasttelegraph.co.uk/imported/article1019763.ece] ] was very unexpected. The opening track of the album is "Black is the Colour". The track was given a more modern arrangement with Hammond organs and bass playing combined with a piano riff. Dillon's vocal earned her comparisons to . Throughout 2001 and 2002, Dillon toured the album in the UK, Ireland and Europe and her fan base grew steadily. The album won many awards and got very positive reviews. The couple ended 2002 on a high with their marriage in December.

The follow up album, "Sweet Liberty", was released on . In terms of sales and airplay, the album was a bigger success. Sales were helped by the inclusion of Dillon's popular version of "" (notably featured on the BBC series ). The album entered the Irish album charts and the UK indie album charts. The album was promoted with songs "High Tide", "There Were Roses" and "Everywhere". The album also had a more balanced mix of traditional and original material, including another Kate Bush-esque track, "Falling Like a Star" and "Broken Bridges". Both songs showed Dillon and Lakeman's songwriting could successfully cross musical borders. Also included was a cover of the song "Standing on the Shore". The album was again mixed by John Reynolds and Alan Branch and was recorded "at home in ".

In January 2004, Dillon traveled to Japan on a promotional tour of the album. Cara's solo career up this point was polished with her receiving "the Meteor Irish Music Award" for Best Irish Female. With two albums under her belt, Dillon's music was showcased on an international scale. Her relationship with WOMAD played a crucial part in this. The couple returned to the studio again in summer 2004 to record their third album.

Dillon's third album, "", was released on . The album was the longest in the making to date and featured several guest appearances. The recorded for two tracks on the album, "Garden Valley" & "The Snows They Melt The Soonest"; , the acclaimed blues guitarist featured on "Grace"; two of Ireland's finest traditional musicians Mairtin O'Connor and Cathal Hayden perform on "Bold Jamie" and Cara duetted with on album highlight "The Streets Of Derry".

The album gave Cara her most successful radio hit to date, "Never In A Million Years", garnering a good amount of airplay on radio stations in the UK and Ireland. The song featured on the Radio 2 playlist for six weeks and was record of the week on BBC Radio Ulster. Despite the encouraging reception of the song, an official single release was never given to the song. It was released on download-only by iTunes a week prior to the album release and climbed into the top 40 most downloaded songs that week. An official single release was planned for after the album came out but it did not happen. The next single to be released from the album was a double A side: "This Time/I Wish You Well". It featured a new radio mix of "This Time" with added vocals and guitars. The single generated some airplay on Radio 2 in July 2006 and was scheduled for release on , however Rough Trade cancelled it, citing a lack of airplay. Some copies of the single are in circulation but are difficult to find.

In January 2008 Cara and her band recorded a DVD "The Redcastle Sessions" in which led to an extensive tour starting in the May and continuing through the folk festival season to the winter of 2008/9. This tour took-in venues across Ireland, Great Britain and The USA and introduced guitarist John Smith as a duet partner on the single "If I Prove False", this single and a fourth album (scheduled for release in late 2008) saw Cara move to her own label . [cite web |url=http://www.culturenorthernireland.org/article.aspx?art_id=247 |title=The Rebirth of Cara Dillon |accessdate=2008-09-28 |work=Culturenorthernireland.org |publisher= |date=2008-06-09 ]

Throughout Dillon's career she has ventured into many successful collaborations with a range of artists. In 1998, she was guest vocalist (credited as "Cara from Polar Star") for on the single from his album, . In 2001, she featured on two tracks on the John Reynolds project "Interview With The Angel", an album by "Ghostland". Cara sang on the tracks "Faith In Love" and "Sacred Touch Of Beauty", the former being the album's lead single. 2005 saw Cara guest on the soundtrack to the British comedy featuring Rowan Atkinson and Maggie Smith, . In 2006, released his debut album, to which Cara provided vocals on the lead UK single "Ordinary Day". The trance track was a big club hit and entered the UK dance charts at 3.

Also on the dance scene, Dillon's award winning version of "Black Is The Colour" was remixed by DJ Pete Devine (2Devine/Coco & Green) and became an instant hit on the dance floors in 2005. Over the next year, the popularity grew steadily and the track topped many polls and became a favourite of the top DJs on the scene. Following legal difficulties with the clearance of the track for release, the remix was scheduled for release on the dance label on , but has now been pushed back to .

2006 also saw Dillon involved with the BBC Radio 2 2006 Radio Ballads, and her vocals feature on the episode "Thirty Years Of Conflict". This was released on CD and an album of songs from the radio ballads has also been released (see Discography).

In 2003, Dillon performed at the at Queen's Opening Ceremony with the . In 2006, Dillon was honoured with the invitation to perform at the opening ceremony of the 2006 at the in Ireland. She sang the Irish song "Mo Ghile Mear" to an audience of over 1 billion worldwide with Afro Celt Soundsystem vocalist , a 60 piece choir and 23 piece band. In October 2006, she performed at the re-opening of the Grand Opera House in Belfast.