His debut album Evening Train resulted from his time spent studying music and management at Coláiste Stiofáin Naofa in Cork. It featured tracks which had previously won Flannery two categories at the International Songwriting Competition in Nashville, Tennessee, as judged by his idol, Tom Waits. He was the first Irish musician to win in this event.

Flannery's second studio album White Lies was released on September 12, 2008, achieving a top ten position on the Irish Albums Chart. It later went platinum and was nominated for the Choice Music Prize.

The Irish Times placed him at number forty-six in a list of "The 50 Best Irish Acts Right Now" published in April 2009. Also that year Flannery won Best Irish Male at the 2009 Meteor Awards. Influences include Kurt Cobain, Leonard Cohen and Bob Dylan.

Flannery was reared on farmland outside Blarney, County Cork.[2][3][4]

Coming from a family with a keen musical interest, Flannery was introduced to folk and blues music at a young age.

Flannery cites an encounter with the music of Kurt Cobain and Nirvana as a direct influence on his desire to become a musician.[2][4] Seeing Cobain perform "The Man Who Sold the World" on MTV Unplugged he promptly purchased a copy of MTV Unplugged in New York.[2][3][4] He soon bought the album Blonde on Blonde as well.[2] Flannery claims to have written his first song at the age of fifteen.[6] His first completed song was called "Mad Man's Road", a tale of a murder which took place on the road in which he lived.[6] He has been dismissive of his earlier material, referring to it as "tripe".[7]

However, he is keen to express his fondness for stonemasonry and its position alongside his music: "I wasn't going to sit in a room and write songs seven days a week and live on bread and beans. I liked doing stonemasonry as well".[7] He still does it on an occasional basis: "We wouldn’t be carving gravestones or anything. We’d do the fronts of houses, entrance walls, stuff like that".[8]

While undergoing a music and management course at Coláiste Stiofáin Naofa in Cork, Flannery commenced writing the album that would become Evening Train, an eleven-track concept album about the exploits of two brothers.[2][9] His original intention had been to write a musical but this endeavour proved unsuccessful.[2]

Before its release Flannery and a friend who worked alongside him in the stonemasonry business embarked on a three-month trip to the United States, living in Williamsburg, Brooklyn.[6][10] Flannery spent his time performing in New York.[6] His sister was present for one of the months and assisted him with organising his performances.[10] Flannery, however, quickly became disillusioned by the New York music scene, and referred to it in one interview as "a bit up its own arse".[6]

Evening Train was received positively by critics in Ireland and the United States.[2] Reviewers noted its "astute and sophisticated lyrics", its "strong, imaginative melodies", its Tom Waits sound.[3][9][11] The RTÉ Guide later said, "His voice was like Tom Waits meets the howling of a grizzled freight train hobo".[12] entertainment.ie reviewer Lauren Murphy described it as "an album dripping with maturity, poise and potential" and that "the most astounding thing" was his age of 21 years.[6][11]

Flannery signed with EMI Records in 2007.[2][6] That same year he was the subject of a programme called Mytunes, broadcast on RTÉ Radio 1 on November 29.[9] He performed on RTÉ Two's Other Voices television programme in 2008.[2] This appearance led to increased interest in Flannery's music in Ireland.[13] The show's presenter Annie Mac, a disc jockey based in London, later admitted she had never heard of Flannery before witnessing his performance.[14] 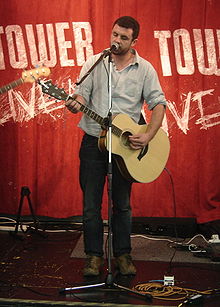 Flannery's second studio album White Lies was released on September 12, 2008,[6] achieving a top ten position on the Irish Albums Chart and later going platinum in Ireland.[3][15] On the day of the album's release Flannery performed "Tomorrow's Papers" on The Late Late Show.[16][17] The song contributed to the increasing popularity of the singer-songwriter.[18] entertainment.ie's Lauren Murphy said: "White Lies may not be a perfect album, but it's certainly a promising step forward for a real talent".[11] RTÉ reviewer Harry Guerin commented: "If you're adamant that Ireland may sink with another singer-songwriter on tour, then this is a record to seek out; you won't notice the time passing and the nation will remain afloat".[13]

Flannery began a tour of Ireland after the release of White Lies.[7] He performed a duet of "Christmas Past" with Lisa Hannigan in December 2008 after Today FM's Tony Fenton paired them together for a radio show broadcast from a rooftop.[10][19] He joined Hannigan at a show in Vicar Street to perform the same duet that month.[20] "Tomorrow's Paper" was translated into the Irish language for a CD titled Ceol '09, an annual compilation released by Seachtain na Gaeilge.[21] The Irish version was recorded in forty minutes at a studio in Dublin's Merrion Square.[21] Flannery performed a cover version of "The River" on The Ray D'Arcy Show's Discover Ireland Feel Good Tour stopover in Carlingford and Cooley Peninsula in March 2009.[22] A deluxe edition of White Lies, which featured a duet of the song "Christmas Past" with Kate Walsh, was released in 2009.[10][23]

Flannery's largest headlining performance in Dublin at this stage occurred at Vicar Street on May 25, 2009.[24] He performed alongside John Spillane at Live at the Marquee in Cork on July 9, 2009.[18][25][26][27] Flannery said being asked to perform there was "daunting [...] In many ways I have drifted into this career and still have to pinch myself regularly to make sure I am not imagining it all".[28] He also performed at the Bloom Festival as part of the 50th anniversary celebrations of The Rose of Tralee in 2009.[29] He made an appearance on the Crawdaddy Stage at Electric Picnic 2009.[30][31][32] On December 31, 2009, he performed a date at the Cork Opera House as part of celebrations marking the end of the decade.[33][34] He has sold out several other venues around Ireland and has also toured the UK.[17][35]

Flannery has written most of his third album.[8]

Flannery composes original lyrics and music.[9] Among the topics he has written about is the subject of heartbreak, for which he has drawn on past experiences.[12] He read the literary works of Charles Bukowski, Jonathan Miller and John Steinbeck from a young age.[12] His biggest musical influences are Leonard Cohen, Bob Dylan and Tom Waits, once sending a letter to Waits but receiving no reply.[6] Flannery attended shows by Cohen at the Royal Hospital Kilmainham and Waits in the Phoenix Park when they came to Ireland in 2008.[6] He is also fond of current music and likes the lyrics of Alex Turner from Arctic Monkeys.[6] The RTÉ Guide once described his lyrics as "so personal they seemed carved from his very soul" and his humour was said to be "as dry as a Good Friday in Glenstall Abbey [sic]".[12]

Flannery's sister Sarah is a past winner of the Esat Young Scientist Exhibition.[36] His mother's family live in Coolroe near Killarney.[36]

Flannery is shy.[6][7] He has experienced terrible stage fright before performances, including vomiting all over the dressing room.[10] He does not often use a computer, preferring instead to ask others to update his Facebook and MySpace accounts, although this leaves him with "really sick" feelings when people come to him at his shows to thank him for replying to their messages.[8]

Flannery tends to socialise with his fellow stonemasons instead of with other singer-songwriters.[6] They prefer to talk about sex instead of music.[12] He also enjoys playing poker.[10] He has admitted: "I'm a dour bollocks. I wouldn't be the life and soul of any party. I'd be sitting in the corner".[12]

The Irish Times placed him at number forty-six in a list of "The 50 Best Irish Acts Right Now" published in April 2009,[40] commenting on his album White Lies: "With this stunning exhibition of the gravel-voiced musician’s abilities, Flannery turned his hand to mournful piano ballads and catchy guitar tunes with a flair that far surpasses his 25 years".[41]

Flannery won in two categories in the International Songwriting Competition in Nashville, Tennessee: "In the Gutter" in the category of Folk Singer-Songwriter and "The Tender" in the category of Lyrics Only.[2][4] This came from a panel of judges which featured several renowned songwriters, including Flannery's idol, Tom Waits.[2][3][6][7] He was the first Irish musician to win in this competition.[2][9] The two songs featured on the album Evening Train.[17]

Flannery was Hot Press's Most Promising Act in its 2009 Reader's Poll.[3]

Flannery won Best Irish Male at the 2009 Meteor Awards.[3][17][36][42] The result was unexpected as beforehand the winner was anticipated to be Duke Special or Jape.[43]

Flannery lost to Jape, though he was mentioned in the acceptance speech, as frontman Richie Egan mentioned what his mother had told him before the award: “They all deserve the award -- sure my mother even told me that Mick Flannery was going to win, she said you're good, Ritchie [sic], but he's gorgeous”.[48]