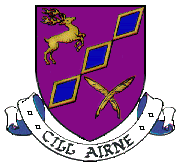 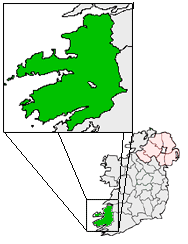 Killarney ( _ga. Cill Airne, meaning "The church of the sloes" [http://www.killarney.ie Official Killarney website outlining meaning of name] ) is a town in , southwestern Ireland. The town is located north of the , on the northeastern shore of the Lough Lein/Leane which are part of . The town is home to St. Mary's Cathedral, , , and .

Killarney was awarded the "Best Kept Town" award for in a cross-border competition jointly organised by the Department of the Environment and the Northern Ireland Amenity Council. Owing to its natural heritage, history and proximity to the , island and its location on the , Killarney is a popular tourist destination.

Killarney is served by National Primary Route N22 (north to and , south to Cork) and National Secondary Route N72 (west to , east to ).

There are train services to Tralee, , Cork and operated by . provides bus services to Limerick (and onwards to Dublin), Tralee, Cork, and . opened on . [cite web | title=Killarney station | work=Railscot - Irish Railways | url=http://www.railscot.co.uk/Ireland/Irish_railways.pdf | accessdate=2007-09-04|format=PDF]

, in between and Killarney, provides an increasing number of air services. , easily accessible by bus or rail, also serves the Kerry region.

Killarney has three teams: , and Spa. The rural hinterland has a large number of teams, such as Kilcummin, Fossa, Firies, Glenflesk and Gneeveguilla. All these teams compete in the Kerry County league and the East Kerry Championship (O'Donoghue Cup) and league.

There are six active rowing clubs in the town, who share a common history in Ireland's oldest surviving regatta, the Killarney Regatta, which is held annually on the first or second Sunday in July. The six clubs are Commercial RC (Killarney), Flesk Valley RC, Fossa RC, Muckross RC, St. Brendan's RC and Workmen RC. The style of rowing seen at the regatta is traditional, fixed seat rowing in wide, wooden 6 person boats. Since the eighties, a number of the clubs have moved toward coastal type rowing and modern 'slide' or Olympic style rowing.

manufacturing and shoe making were major industries in the town during the last century but have since seen decline. Liebherr Cranes have had a presence in Killarney since 1958, with a combined manufacturing/research and development facility in the town. Dollinger-SPX, a products firm and Killarney Plastics have production facilities in the local IDA Industrial Estate. In recent years Beocare, a healthcare company set up a manufacturing and research and development base in the town with the assistance of . The Department of Arts, Sport and Tourism have also moved to Killarney, a key beneficiary of the decentalisation of Civil Service departments outside the capital, Dublin. Certain sections of the Department of Justice have been situated in Killarney for a number of years.

Tourism is by far the largest industry in Killarney. With the exception of , there are more hotel beds in Killarney than in any other Irish town or city. The tourist population is increasingly diverse however a significant proportion of tourists originate from the USA, Ireland, the UK, Germany and other European countries.

Killarney's tourism history goes back at least to the mid 1700s, when Thomas, fourth Viscount Kenmare, began to attract visitors and new residents to the town. The date of 1747 was used in recent 250-year celebrations to honour the history of Killarney tourism. A visit by in 1861 gave the town international exposure, which it has enjoyed ever since. In the Summer months, Killarney is busy with tourists perusing the town's numerous shops and tourist attractions. Many shops are tourist oriented with many gift shops around the town. The town centre also offers a wide range of hotels, pubs and restaurants to cater for every requirement. Killarney is also famous for its jaunting cars (horse drawn carts) operated by local jarvies. Tourists can avail of jaunting car rides and a guided tour of the town's attractions offered by the jarvies.

Killarney SummerFest [ [http://www.killarneysummerfest.com The official web-site of Killarney SummerFest] ] is a highlight of the year in the town, featuring outdoor and indoor concerts from major Irish and international acts. Previous acts include , , , , , Tom Jones, , and Pink. In 2008, return to headline the outdoor concerts, supported by . Singer and comedian are among the other acts announced. Other events scheduled for SummerFest 2008 include outdoor theatre, hot air ballooning, , art exhibitions, children's events, and the annual SummerFest Black Tie Ball. Sporting events during the festival include the Ring of Kerry Charity Cycle, the Killarney Regatta, the 5km SummerFest Fun Run and the Killarney Races.

*
*
*
*
*
* - this square medieval tower was built by the O'Donoghues on the shores of Lough Lein in the 15th century. Now restored, the castle houses a collection of 16th and 17th century oak furniture. Ross Castle is the departure point for boat tours on Lough Lein.

Killarney is a popular destination for partygoers. Killarney's nightspots are often busy seven days a week during the summer months, when the population of the town and the surrounding area increases significantly. Pubs and clubs most commonly visited include Mustang Sallys, McSorleys, Scruffys, Scotts, Charlie Foleys, Jades, The Grand Hotel and The Granary.

Until the early 1980s, Killarney was the destination of the , which was held every year over the holiday weekend. Nowadays, on the first weekend of May each year, the town plays host to the International Rally of the Lakes. The rally brings spectators in their thousands to watch the top tarmac rally crews do battle over the classic stages of the southwest.

In recent years the event has attracted vast numbers of "boy racers" and an increase in public order offences. The event saw a large presence in the town to tackle such problems but the event was still marred by 64 arrests in the town for various degrees of public order offences including burnt out cars, destruction of property and numerous reckless driving arressts [ [http://www.the-kingdom.ie/news/story/?trs=cwqlcwojoj&cat=news The Kingdom: 100 arrests as gardaí crackdown on thugs ] ]