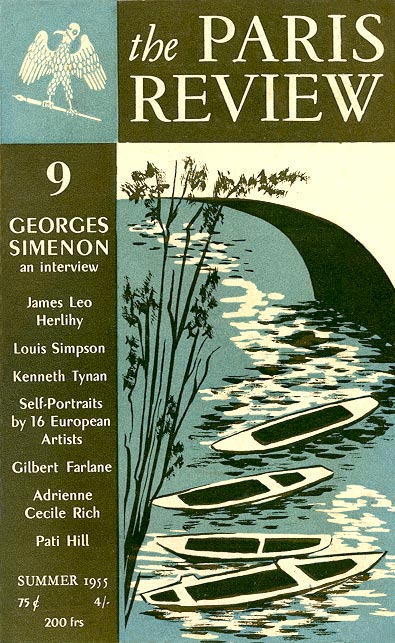 "The Paris Review" is an English-language based in . As its name suggests it was founded in Paris in 1953, for "the good writers and good poets, the non-drumbeaters and non-axe grinders. So long as they're good." It is best known for author interviews, in which the authors tell in their own words the craft of writing and criticisms of their own works; as well as a forum for new and upcoming authors. Prior to 2005 it focused on prose fiction and poetry, after which it also included non-fiction pieces and authors. Some of the best work first published in "The Paris Review" are now available in book anthology form. "The Paris Review" awards a number of prizes each year.

The founding editors were , Thomas H. Guinzburg, , , and John P. C. Train. The first publisher was , and the current publisher is . George Plimpton was the publication's editor until his death in 2003. Du Bois, the magazine’s first art editor, designed its now iconic logo, "The Paris Review" eagle. It has both American and French significance: an American eagle holding a pen and wearing a , a symbol of revolutionary France.

The magazine’s first office was located in a small room of the publishing house Les Editions de la Table Ronde. Staff members of "The Paris Review" were not given keys to the office, so those who worked late would have to climb out of the window, hang from the ledge and jump, often mistaken for burglars by passing gendarmesFact|date=April 2007. Other legendary locations of "The Paris Review" include a Thames River Grain Carrier anchored on the Seine from 1956 to 1957, where editorial conferences were punctuated by jam sessions by musicians such as Alan Eager, , Peter Duchin, Kenny Clarke and . For practical reasons the office was soon relocated, owing in no small part to the lack of telephone communication. The Café de Tournon in the rue du Tournon on the Rive Gauche was the meeting place for staffers and writers, including du Bois, Plimpton, Matthiessen, , and .

In the debut issue, one of the first advisory editors, , wrote in an introductory letter to readers:

I think "The Paris Review" should welcome these people into its pages: the good writers and good poets, the non-drumbeaters and non-axe grinders. So long as they're good.

Also in that first issue was an interview with , whom Plimpton knew while studying at King’s College, Cambridge. Forster became the first in a long series of now-legendary author interviews. Plimpton went on to secure an interview with , whom he met at a bar in Paris and who he said was the only person he ever saw buying a copy of the magazine. (This is surprising given the fact that Plimpton’s calling card doubled as a subscription form, which he was known to leave on bus seats and slip into people’s pockets: “No harm done. No harm filling one out.”) The interview series would become a trademark of the magazine, lauded for its groundbreaking insight into the life of the writer and the process of writing. It allowed authors to talk about their own work directly, as an alternative to literary criticism, and they have responded with some of the most revealing self-portraits in literature. Among the interviewees are , , , , , , , and . In the words of one critic, it is “one of the single most persistent acts of cultural conservation in the history of the world.” Although they have a venerable history, some of the interviews succeeded almost in spite of themselves: ’s interview almost ended before it began when one of the interviewers turned up hungover and threw up in his hat on Greene’s doorstep.

The magazine's current publisher Drue Heinz shares the credit with the artist Jane Wilson for creating the magazine’s print series. In the early 1960s, Wilson asked a number of her peers to produce posters promoting the magazine in a limited edition of two to three hundred in an effort to raise funds for the magazine. Artists involved included , , , , and , whose poster was a blow-up of a bill to "The Paris Review" for two bottles of scotch and one bottle of vodka from an Upper East Side liquor store. Fitting, given that during Plimpton's lifetime "The Paris Review" was well known for its wild parties in his New York apartment overlooking the on East 72nd Street, where first-floor and basement rooms in the same building became the headquarters of the magazine since its move from Paris to New York in 1973. These parties were attended (or crashed) by many an aspiring young writer or editor. However, it is for its unmatched literary content that it has been lauded by its readers. "Time" magazine has hailed it as “The biggest ‘little magazine’ in history,” and said “"The Paris Review" is one of the few truly essential literary magazines of the twentieth century—and now of the twenty-first.”

Throughout its history, "The Paris Review" has introduced the important writers of the day. was first published in its pages, as were , , , , , and . Selections from 's novel "" appeared in the fifth issue, one of his first publications in English. The magazine was also among the first to recognize the work of , with the publication of his short story, “The Mexican Girl,” in 1955. Other milestones of contemporary literature, now widely anthologized, also first made their appearance in "The Paris Review": 's "Last Comes the Raven", Philip Roth's "", 's "Alice", 's "", 's "Far Tortuga", ’s "", and ’s "".

Plimpton died , , leaving managing editor Brigid Hughes to take the reins. It was during this time that "The Paris Review" was accused by the of exercising covert influence over the editorial policy of "The London Review of Books". [cite news |first=Richard |last=Cummings |authorlink = Richard Cummings (writer) |title=The Fiction of the State |url=http://www.literaryrevolution.com/mr-cummings-52305.html |publisher=Underground Literary Alliance |date=2005-05-23 |accessdate=2007-01-20] An article published by the "" in 2007 [cite news |first=Celia |last=McGee |title=The Burgeoning Rebirth of a Bygone Literary Star |url=http://www.nytimes.com/2007/01/13/books/13hume.html |publisher=New York Times |date=2007-01-13 |accessdate=2007-01-15 ] supported the claim that founding editor was in the CIA but stated that the magazine was used as a cover, rather than a collaborator, for his spying activities. In a May 27, 2008 interview with Charlie Rose, Matthiessenstates that he "invented The Paris Review as cover" for himself when a CIA agent. [cite web |first=Peter |last=Matthiessen |title=The Charlie Rose Show |url=http://www.charlierose.com/guests/peter-matthiessen |location=15:30-15:41 of interview | quote=I went there as a CIA agent, to Paris...I invented the Paris Review as cover. |pages=15:30-15:41 of interview |date=2008-05-27 |accessdate=2008-09-14]

In 2005, the magazine’s board of directors (the magazine has been a nonprofit since 2000) hired a search committee headed by , the editor of "", to find a permanent editor. was deemed a fitting successor to Plimpton. Gourevitch had previously garnered accolades as a staff writer at the "" and as the author of "A Cold Case" (2001) and "" (1998), which won the National Book Critics Circle Award, the Los Angeles Times Book Prize, and the Guardian First Book Award. Gourevitch impressed the search committee by proposing that "The Paris Review" could be “reinvigorated and slightly reconceived for a new century,” while still respecting its extraordinary legacy.

His debut issue, appearing in September 2005, revealed the new look of "The Paris Review". Physically, it is taller and trimmer – “a very hot date,” Gourevitch has quipped. Inside, the format has also been revitalized. Gourevitch internationalized the poetry content by publishing more poems by fewer poets in each issue, arranging previously scattered poems into folios and hiring Charles Simic, an emigrant from Socialist Federal Republic of Yugoslavia as one of the poetry editors. There is a decided preference for shorter poems in the new Paris Review as reflected by the fact that the Bernard F. Conners Prize for Poetry given by "The Paris Review" "for the finest poem over 200 lines published in "The Paris Review" in a given year," has not been awarded since 2004 according to the magazine.

Gourevitch also incorporated more nonfiction pieces and photography, which is now in color, into the magazine. The introduction of more nonfiction into the magazine met with immediate success: the new “Encounter” series has published Q&A sessions with the lower segments of Chinese society, including a corpse walker and a professional mourner; a prisoner trapped in a New Orleans prison during Hurricane Katrina; a Serbian assassin; and Laura Albert, the woman who pulled off the literary hoax. New fiction writers have also been discovered, most notably , whose story “Refresh, Refresh” from the Fall/Winter 2005 issue was the lead story in 2006 and won the 2007 for Fiction. There have also been new interviews with such literary legends as , , and . In 2006 "The Paris Review" and Picador published a critically acclaimed volume of "Paris Review" interviews, selected from over fifty years of Writers at Work interviews.

Critics interviewed include , , , and .

Other publications from "The Paris Review"