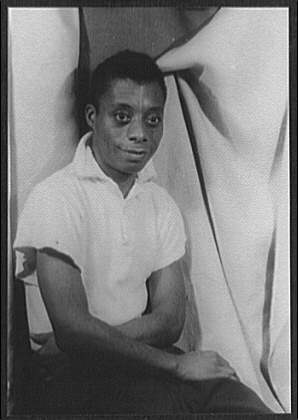 Most of Baldwin's work deals with racial and sexual issues in the mid-20th century . His novels are notable for the personal way in which they explore questions of identity as well as for the way in which they mine complex social and psychological pressures related to being black and homosexual well before the social, cultural or political equality of these groups was improved.

James Arthur Baldwin, an , was born in the Harlem neighborhood of New York City to a single mother, Emma Berdis Jones. When he was still young, his mother married a preacher, David Baldwin, who adopted James. The family was poor, and James and his adopted father had a difficult relationship. Baldwin attended the prestigious De Witt Clinton Public High School in New York. At the age of 14 he joined the Pentecostal Church and became a Pentecostal preacher.

When he was 17 years old, Baldwin turned away from religion and moved to Greenwich Village, a New York City neighborhood famous for its freethinking artists and writers. Supporting himself with odd jobs, he began to write short stories, essays, and book reviews, many of which were later collected in the volume "" (1955).

During this time Baldwin began to recognize his own homosexuality. In 1948, disillusioned by American prejudice against blacks and homosexuals, Baldwin left the United States for Paris, France, where he would live for most of his later life. [ [http://encarta.msn.com/encyclopedia_761571268/Baldwin_James.html James Baldwin - MSN Encarta ] ]

One source of support came from an admired older writer Richard Wright, whom he called "the greatest black writer in the world for me." Wright and Baldwin became friends for a short time and Wright helped him to secure the "Eugene F. Saxon Memorial Award". Baldwin titled a collection of essays "", in clear reference to Wright's novel "". However, Baldwin's 1949 essay "Everybody's Protest Novel" ended the two authors' friendship [Michelle M. Wright '"Alas, Poor Richard!": Transatlantic Baldwin, The Politics of Forgetting, and the Project of Modernity', "James Baldwin Now", ed. Dwight A. McBride, New York University Press, 1999, page 208] because Baldwin asserted that Wright's novel "Native Son", like 's "", lacked credible characters and psychological complexity. However, during an interview with Julius Lester, [cite web| url=http://www.nytimes.com/books/98/03/29/specials/baldwin-reflections.html| title=Baldwin Reflections| publisher=New York Times] Baldwin explained that his adoration for Wright remained: "I knew Richard and I loved him. I was not attacking him; I was trying to clarify something for myself."

1949 was also the year he met and fell in love with . The boy was a seventeen-year-old runaway, and the two became very close, until Happsberger's marriage three years later, an event that left Baldwin devastated. [Winston Wilde, "Legacies of Love" p.93]

Another major influence on Baldwin's life was the painter . In "" (1985), Baldwin describes Delaney as "the first living proof, for me, that a black man could be an artist. In a warmer time, a less blasphemous place, he would have been recognized as my teacher and I as his pupil. He became, for me, an example of courage and integrity, humility and passion. An absolute integrity: I saw him shaken many times and I lived to see him broken but I never saw him bow."

Baldwin was a close friend of the singer, pianist and civil rights activist . Together with and , Baldwin is responsible for making Simone aware of the civil rights movement that was forming at that time to fight racial inequality. He also provided her with literary references that influenced her later work. called Baldwin her "friend and brother", and credited him for "setting the stage" for the writing of her 1969 autobiography, "". [cite news | last = Angelou | first = Maya | title = A brother's love | work = The New York Times | date = 1987-12-20 | url = http://www.nytimes.com/books/98/03/29/specials/baldwin-angelou.html?_r=2&oref=slogin&oref=login | accessdate = 2008-10-08]

In 1953, Baldwin's first novel, "Go Tell It on the Mountain", an autobiographical , was published. Baldwin's first collection of essays, "Notes of a Native Son", appeared two years after. Baldwin continued to experiment with literary forms throughout his career, publishing poetry and plays as well as the fiction and essays for which he was known.

Baldwin's second novel, "", stirred controversy when it was first published in 1956 due to its explicit homoerotic content. [Field, Douglas. Passing as a Cold War novel : anxiety and assimilation in James Baldwin's Giovanni's room. In: American Cold War culture / edited by Douglas Field. Edinburgh : Edinburgh University Press, 2005.] Baldwin was again resisting labels with the publication of this work:

Baldwin's lengthy essay "" (frequently called "" after the title of the book in which it was published) [cite news| author=Sheldon Binn| title=Reivew of "The Fire Next Time"| date= 1963-01-31| publisher= The New York Times| url=http://www.nytimes.com/books/98/03/29/specials/baldwin-fire.html ] similarly showed the seething discontent of the 1960s in novel form. The essay was originally published in two oversized issues of "" and landed Baldwin on the cover of "Time" magazine in 1963 while Baldwin was touring the South speaking about the restive Civil Rights movement. The essay talked about the uneasy relationship between Christianity and the burgeoning Black Muslim movement. Baldwin's next book-length essay, "", also discussed his own experience in the context of the later 1960s, specifically the assassinations of three of his personal friends: , , and Martin Luther King, Jr.

Baldwin's writings of the 1970s and 1980s have been largely overlooked by critics. The assassinations of black leaders in the 1960s, 's vicious homophobic attack on Baldwin in "Soul on Ice", and Baldwin's return to southern France contributed to the sense that he was not in touch with his readership. Always true to his own convictions rather than to the tastes of others, Baldwin continued to write what he wanted to write. His two novels written in the 1970s, "" and "", placed a strong emphasis on the importance of black families, and he concluded his career by publishing a volume of poetry, "", as well as another book-length essay, "", which was an extended meditation inspired by the of the early 1980s.

Baldwin's influence on other writers has been profound: edited the two volume editions of Baldwin's fiction and essays, and a recent collection of critical essays links these two writers.

In 1992, in Amherst, MA, established the James Baldwin Scholars program, an urban outreach initiative, in honor of Baldwin, who taught at Hampshire in the early 1980s. The JBS Program provides talented students of color from underserved communities an opportunity to develop and improve the skills necessary for college success through coursework and tutorial support for one transitional year, after which Baldwin scholars may apply for full matriculation to Hampshire or any other four-year college program.

In 2005 the USPS created a First-Class Postage Stamp dedicated to him which featured him on the front, and on the back of the peeling paper had a short biography. One of Baldwin's richest short stories, "Sonny's Blues," appears in many anthologies of short fiction used in introductory college literature classes.