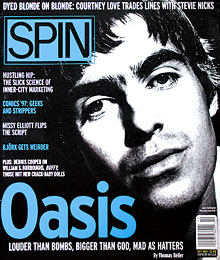 "Spin" is a that reports on Music for Life. Founded in by publisher , it competes with industry stalwart "". Madonna Ciccone was the subject of the cover of the first issue.

In its early years, the magazine was noted for its broad music coverage with an emphasis on college-oriented rock music and on the ongoing emergence of . The magazine was eclectic and bold, if sometimes haphazard. It pointedly provided a national alternative to the "Rolling Stone's" more establishment-oriented style. "Spin" prominently placed newer artists such as R.E.M., Prince, , , , and , on its covers and did lengthy features on established figures such as , , , , , , and —'s article on Hooker won the magazine its first major award.

Putting Black artists and women artists on the cover was considered a risk, potentially damaging newsstand sales. Moreover, the magazine devoted itself to a long term set of investigative pieces on the crisis at a time when even gay publications were concerned about losing advertisers by doing coverage of the disease. On a cultural level, the magazine devoted significant coverage to hardcore punk, country and alternative country, and , , of the most adventurous sort, the burgeoning and scenes of the 1980s, and a variety of fringe styles. Artists such as , , Blondie, X, Black Flag, and the former members of , , and the early punk/new wave movement were cultural heritage pioneers in "Spin's" editorial mix, and were reviewed, featured, and mentioned constantly at a time when Rolling Stone and other publications scarcely acknowledged their existenceFact|date=August 2008. Spin's extensive coverage of [hip-hop music and culture, especially that of contributing editor John Leland, was notable at a time when no other national publication was paying serious attention to the genre.Fact|date=August 2008.

Editorial contributions by musical and cultural figures such as , , , , and others were an innovation at the time. The magazine also did scene reports on cities such as , or , , at times when they were unrecognized as cultural incubators. A 1990 article on the contemporary scene brought to national attention for the first time. Coverage of American cartoonists, Japanese "", , outsider artists, "", and other non-mainstream cultural phenomena distinguished the magazine's dynamic early years.

In late 1987, publisher Bob Guccione Jr.'s father, Bob Guccione Sr., abruptly shut the magazine down despite the fact that the 2-year-old magazine was widely considered a success, with a newsstand circulation of 150,000.Fact|date=August 2008 Guccione Jr. was able to rally much of his staff, locate new investors and offices, and after missing a month's publication, returned with a combined November-December issue.

For "Spin's" 20th year, it released a book chronicling the last two decades in music. The book has essays on , , emo, and many other types of , as well as pieces on musical acts including , Nirvana, , , , and .

In February 2008, "Spin" released a digital edition available through .