Warrant officers can and do command detachments, units, activities, vessels, aircraft, and armored vehicles as well as lead, coach, train, and counsel subordinates. However, the warrant officer's primary task as a leader is to serve as a technical expert, providing valuable skills, guidance, and expertise to commanders and organizations in their particular field.

In the Navy, the Chief Warrant Officer (CWO) rank is a technical specialist who directs specific activities essential to the proper operation of the ship, which also require commissioned officer authority.[1] Navy CWOs serve in 30 specialties covering five categories. CWO should not be confused with the Limited Duty Officer in the Navy. CWOs perform duties that are directly related to their previous enlisted service and specialized training. This allows the Navy to capitalize on the experience of CWOs without having to frequently transition them to other duty assignments for advancement.[2] With the exception of the Navy's Flying Chief Warrant Officer program, all Navy warrant officers are accessed from the Chief Petty Officer pay grades, E-7 through E-9, analogous to a senior non-commissioned officer in the other services. The recently implemented Flying Chief Warrant Officer program that will train qualified non-college degreed sailors to become Naval Aviators and Naval Flight Officers in selected naval aircraft is open to sailors in pay grades of E-5 and E-6 and chief petty officers in pay grade E-7.

The United States Navy has had warrant officers among its ranks since 23 December 1775, when John Berriman received a warrant to act as purser aboard the brigantine, USS Andrew Doria. That warrant was considered a patent of trust and honor but was not considered a commission to command. Since this first appointment, Navy warrant officers have held positions as surgeons, master mates, boatswains, carpenters, and chaplains.[1] Until 1912, a Midshipman graduating from the United States Naval Academy was required to have two years of sea duty as a warrant officer before receiving a commission as an Ensign.[3] Although based on the British Royal Navy warrant ranks that were in place until 1949, the United States had never needed to address an issue of aristocracy, which resulted in warranted officers in the Royal Navy. However, the United States Navy experienced a similar issue of rank, where highly competent senior non-commissioned officers are required to report to inexperienced junior officers, giving rise to special status to the Navy's chief warrant officers.

In 1975, the Navy stopped utilizing the rank of Warrant Officer 1 (WO1), also known as pay grade W-1, because chief petty officers in pay grades E-7 and above with many years in service would lose pay when appointed to the rank of Warrant Officer. The Navy appoints their warrant officers directly to the rank of CWO2 (i.e., as chief warrant officers), considers them as "commissioned" officers, and manages all grades (CWO2 through CWO5) by billets appropriate for each rank. In past years, some CWOs resigned their warrant commission prior to retirement in order to receive greater retirement pay at their former senior enlisted rank.[4] However, this pay disparity has effectively disappeared in recent years and all Navy CWOs now retire at the appropriate officer grade.

The Navy started a test program called the "Flying Chief Warrant Officer Program" in 2006, to acquire pilots and naval flight officers. Enlisted sailors in the grades E-5 through E-7 who have at least an associate's degree and are not currently serving in the diver, master-at-arms, nuclear, SEAL, SWCC or EOD communities are eligible to apply. Upon being commissioned as CWO2, selectees will undergo warrant officer indoctrination and then flight school for 18 to 30 months. After completion of flight school, selectees will be placed in one of four types of squadrons: anti-submarine, combat support, patrol or reconnaissance. The pilots and naval flight officers will then be trained to operate the P-3 Orion, the EP-3E Aries II, the E-6 Mercury, or the MH-60 Seahawk, and will eventually qualify to fly the P-8 Poseidon. The Navy will reevaluate the program in 2011, when the last of the "flying" chief warrant officers are expected to report to their operational Fleet squadrons.[2][5]

The Army Warrant Officer traces lineage to the civilian Headquarters Clerk, later designated the Army Field Clerk. An Army Judge Advocate General review determined that field clerks should be members of the military. Legislation in 1916 authorized those positions as military. On 9 July 1918, Congress established the rank and grade of Warrant Officer concurrent with establishing the Army Mine Planter Service (AMPS)[6] within the Coast Artillery Corps. Creation of the Mine Planter Service replaced an informal service crewed by civilians, replacing them with military personnel, of whom the vessel's master, mates, chief engineer, and assistant engineers were Army warrant officers. The official color of the Warrant Officer Corps was based on the brown sleeve insignia of rank for ship's officers of the Army Mine Planter (AMP).[7][8][9]

Since that time, the position of WO in the Army has been refined. In 1941, two grades were created, Warrant Officer Junior Grade (W1) and Chief Warrant Officer (W2). In 1942, there were temporary appointments in about 40 occupational areas, then in September 1942 the grade of Flight Officer was created in the W1 pay grade and assigned to the US Army Air Force (USAAF).

Some of the first flight officers were Americans serving as sergeant pilots in the Royal Air Force and were transferred to the USAAF after the U.S. entered the war. Most flight officers were graduates of various USAAF flight training programs, including pilot, navigator and bombardier ratings. A portion of each graduating class were commissioned to Second Lieutenants, while the remainder were appointed to Flight Officer. Once reaching operational units and after gaining flying experience, many flight officers were later offered direct commissions as lieutenants.

The Army warrant officer is a technical expert, combat leader, trainer, and advisor in 45 basic Military Occupational Specialties.[10] They serve in 15 branches of the service,[11] spanning the Active service, the Army National Guard, and the U.S. Army Reserve. Warrant officers command the Army's vessels and most bands and aircraft. In addition, they may be found in command of various small units and detached teams.[12]

The Army utilizes warrant officers to serve in specific positions which require greater longevity than the billet duration of commanders and other staff officers. The duration of these assignments result in increased technical expertise as well as increased leadership and management skills.

Regardless of rank, Army warrant officers are officially addressed as Mister (Mrs., Miss, Ms.). [13] Unofficially, the informal title of "Chief" is often used as a familiar form of address.

The body of warrant officers in the Army comprises two communities: technicians and aviators. Technicians typically must be enlisted in the rank of Sergeant (E-5) or above in a related specialty to qualify to become a Warrant Officer. The aviation field is open to all applicants, military or civilian, who meet the stringent medical and aptitude requirements. Civilian applicants to Warrant Officer Flight Training (WOFT) are occasionally referred to as going from "high school to flight school" because a college degree is only a recommended qualification, this as compared to a degree being mandatory in tandem with a commission in at least pay grade O-1 in the other U.S. military aviation programs.[14] 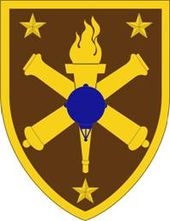 The USAWOCC patch was created in 2008.

Warrant Officer, One (WO1)

Chief warrant officers in the Coast Guard may be found in command of larger small boat stations and patrol boats, as specialists and supervisors in other technical areas, and as special agents in the Coast Guard Investigative Service (CGIS). They wear insignia essentially like that of their Navy counterparts, but with the USCG shield between the rank insignia and the specialty mark, as Coast Guard commissioned officers do with their rank insignia. Like their Navy counterparts, candidates for the rank of Chief Warrant Officer must typically be serving in the chief petty officer grades (E-7 through E-9), however, the Coast Guard also permits selection of first class petty officers (E-6) who are in the top 50% on their advancement list to E-7. Like the Navy, the Coast Guard does not use the rank of Warrant Officer (WO-1). The Coast Guard also does not use the CWO-5 grade.[17] 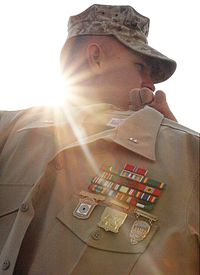 The Marine Corps has had warranted officers since 1916 when the Commandant of the Marine Corps made a request to the Secretary of the Navy for the creation of two warrant grades, Marine Gunner and quartermaster clerk, those appointed to be selected from the non-commissioned officer ranks.

On August 26, 1916, Congress increased the Corps strength, which included adding the rank of Warrant Officer; 43 Marine Gunners and 41 quartermaster clerks would be appointed. On May 22, 1917, due to commissioned officer shortages all but three of the appointees were commissioned as temporary second lieutenants. In 1918, the grade of pay clerk was added.

In June, 1926 Congress created the commissioned warrant grades of Chief Marine Gunner, chief quartermaster clerk and chief pay clerk. Requirements for promotion to chief were six years of service as a warrant officer and an examination to qualify.

On February 1, 1992 the pay grade of W-5 was created, only 5 percent of chief warrant officers were to occupy this grade.

The duties Marine warrant officers typically fulfill are those that would normally call for the authority of a commissioned officer, however, require an additional level of technical proficiency and practical experience that a commissioned officer would not have had the opportunity to achieve.