Warrant officer
"W/O" redirects here. W/O may also refer to Write-off.

History: Origins in the Royal Navy

The warrant officer corps began in the 13th century in the nascent English Royal Navy.[1] At that time, noblemen with military experience took command of the new Navy, adopting the military ranks of lieutenant and captain. These officers often had no knowledge of life on board a ship — let alone how to navigate such a vessel — and relied on the expertise of the ship's Master and other seamen who tended to the technical aspects of running the ship. As cannon came into use, the officers also required gunnery experts.[2]

Literacy was one thing that all warrant officers had in common, and this distinguished them from the common seamen. According to the Admiralty Regulations, "No person shall be appointed to any station in which he is to have charge of stores, unless he can read and write, and is sufficiently skilled in arithmetic to keep an account of them correctly". Since all warrant officers had responsibility for stores, this was enough to debar the illiterate.[3]

Relative Ranks in the Royal Navy, c1810. Warrant Officers are underlined in the chart.[4]

Demise of the Royal Naval warrants

In 1949, the ranks of WO and CWO were changed to "Commissioned Officer" and "Senior Commissioned Officer", the latter ranking with but after the rank of Lieutenant, and they were admitted to the wardroom, the WOs messes closing down. Collectively these officers were known as "Branch Officers", being retitled "Special Duties" officers in 1956. In 1998, the Special Duties list was merged with the General list of officers in the Royal Navy, all officers now having the same opportunity to reach the highest commissioned ranks.[2] 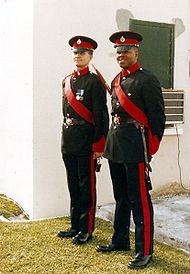 In the British Army, there are two warrant ranks, Warrant Officer Class 2 (WO2) and Warrant Officer Class 1 (WO1), the latter being the senior of the two. It used to be more common to refer to these ranks as WOII and WOI (using Roman instead of Arabic numerals). Warrant Officer 1st Class or 2nd Class is incorrect. The rank immediately below WO2 is Staff Sergeant (or Colour Sergeant).[2]

The רב-סמל בכיר Rav samal bakhír, Warrant officer and the רב-נגד Rav nagad, Chief Warrant Officer are both non-commissioned officers ranks in the Israel Defense Forces (IDF). Because the IDF is an integrated force, they have a unique rank structure. IDF ranks are the same in all services (army, navy, air force, etc.). The ranks are derived from those of the paramilitary Haganah developed in the British Mandate of Palestine period to protect the Yishuv. This origin is reflected in the slightly-compacted IDF rank structure.[13]

In the United States military, a Warrant Officer (grade W-1 to W-5) is ranked as an officer above the senior-most enlisted ranks, as well as officer cadets and candidates, but below the officer grade of O-1 (NATO: OF-1). The precedence of an Army Warrant Officer is "with but after Lieutenants." Warrant officers are highly skilled, single-track specialty officers, and while the ranks are authorized by Congress, each branch of the Uniformed Services selects, manages, and utilizes warrant officers in slightly different ways. For appointment to Warrant Officer One (W-1), a warrant is approved by the secretary of the respective service. Chief Warrant Officers (W-2 to W-5) are commissioned by the President of the United States and take the same oath as regular commissioned officers (O-1 to O-10).[15]

Warrant officers can and do command detachments, units, activities, vessels, aircraft, and armored vehicles as well as lead, coach, train, and counsel subordinates. However, the Warrant Officer's primary task as a leader is to serve as a technical expert, providing valuable skills, guidance, and expertise to commanders and organizations in their particular field.[15]