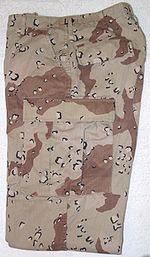 These pants have the chocolate-chip camouflage pattern.

Desert Battle Dress Uniform[1] (abbreviated DBDU, often called Chocolate-Chip Camouflage, Cookie Dough Camouflage, or the Six-Color Desert Pattern) was the camouflage used by the United States Military during the Gulf War and in the early 1990s. The camouflage received its nickname because it resembles chocolate-chip cookie dough. It is made up of a base pattern of light tan overlaid with broad swathes of pale olive green and wide two-tone bands of brown. Clusters of black-on-white spots are scattered over it which were meant to mimic the appearance of rocks.

Although the chocolate-chip camouflage became well-known during the Gulf War, it was originally designed in 1962. The Army, believing that it might become necessary to intervene in the Arab-Israeli conflicts, developed a test pattern using the deserts of southwestern United States as a model. When the hostilities in the Middle East wound down, the test pattern was mothballed. The formation of the Rapid Deployment Force (RDF) in 1979, with its remit to operate in the Middle East, and protect U.S. interests in the Persian Gulf region, saw the need for desert camouflage clothing to emerge again. 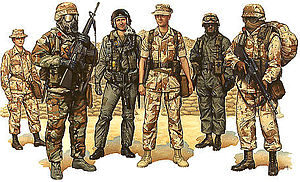 The six-color desert pattern entered service in 1981 at the same time as the woodland BDUs and would be worn in limited numbers by U.S. troops taking part in the biennial Bright Star exercises in Egypt during the 1980s, and by FORSCOM peacekeepers assigned to the Multinational Force and Observers in the Egyptian Sinai Desert, but issued in large numbers prior to the Gulf War. However, there is evidence that the six-color desert pattern camouflage was in use before 1981 with photographs of American military personnel involved in Operation Eagle Claw in April 1980 using this camouflage pattern in the failed attempt to rescue US Embassy staff being held hostage Iran.

Feedback from these users indicated that the design contrasted too much with the terrain, preventing the camouflage from blending in effectively. Anecdotal evidence suggested that the dark areas of the pattern warmed up more than the paler parts under desert sunlight, and retained the heat longer. The six colors were also more expensive to manufacture than three or four colors, and the need for a camouflage that would be suitable for use in any desert resulted in a requirement for a new desert camouflage uniform. The U.S. Army Natick Soldier Center began the search for a substitute. Samples of sand and earth from the Middle East were measured for optical and infrared reflectance, and seven trial patterns were created using these statistics. The patterns were evaluated in fourteen different desert locations and narrowed down to one favourite. The resulting "Desert Camouflage Pattern: Combat" was standardized in 1990, but was not ready before troops deployed to Saudi Arabia during the Gulf War of 1990-1991. Consequently U.S. forces wore the six-color BDUs during the campaign. During that war, after initiatives by General Norman Schwarzkopf, the six-color Desert BDU was produced in 100% cotton poplin without reinforcement panels in order to improve comfort in hot desert conditions. A total of 500,000 improved cotton BDUs were ordered. However, cost concerns caused the cotton six-color Desert BDU to be discontinued shortly after the Gulf war.[2]

Closeup of the pattern

An initial batch of desert BDUs in the new camouflage scheme was en route to the Middle East when hostilities ceased.[3] The pattern, officially issued with the new Desert Camouflage Uniform (DCU) in 1993, consisted of a subtle blend of large pastel green and light tan shapes, with sparsely placed, narrow, reddish brown patches, leading the design to be unofficially nicknamed the “Coffee Stain” pattern.

Both patterns were briefly used together during the transition period, most notably during Operation Restore Hope and Operation Gothic Serpent (some U.S. Army Rangers during the latter occasionally wore the newer three-color DCU's along with kevlar helmet covers retaining the old six-color pattern). In the 2003 invasion of Iraq, the U.S. Military used both the tri-color DCU and MARPAT camouflage patterns.

Even today the chocolate-chip pattern is still in use outside of the United States. A uniform similar to the Desert Battle Dress Uniform was issued to the Iraqi National Guard before it was dissolved in 2004 and other Iraqi security forces. South Korean forces have used, in limited numbers since 1993, a variant with brown replacing the black in the U.S. design; this Korean design has also been tested in the United Arab Emirates. The National Guard of Oman wear a pattern mixing chocolate-chip with 'amoeba', while the National Guards of both Saudi Arabia and Kuwait use a grey variation on the chocolate-chip design. The Saudis also use a grey, black, and white 'urban' variation and the police wear a blue version of the same design; Palestinian police also use a blue chocolate-chip patterned uniform. The South African "Soldier 2000" pattern is similar to the U.S. design. A copy of the pattern, using tan, medium brown, bottle-green and greyish green, in addition to the black-on-white pebbles, is used in Kazakhstan. 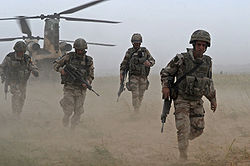 DBDUs in use by Spanish soldiers in 2008. 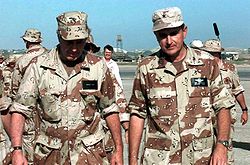