Mulvane was founded in August 1879 at the junction of five Santa Fe rail lines. It is named for Joab R. Mulvane. Mr. Mulvane came to Kansas in 1876.[citation needed] He resided in Topeka and in his later years spent the summer season at his island estate on Crab Lake in northern Wisconsin.[citation needed] Joab Mulvane was perhaps the most successful Kansan of his generation.[citation needed] The breadth of his interests has shaped modern Kansas and far beyond especially in shipping logistics and the strategic advantage of Kansas as a single point distribution hub for North America[4] which means his work had profound and lasting impacts. He brought many elements of the Santa Fe Railway together. He was president of at least nine railroads and he presided over the Chicago, Kansas and Western Railway Company, as its President, when it built over 900 miles of rail lines for the Santa Fe.[citation needed]. Some of his other interests included: President of: the Kansas Town Company, the Quivera Town and Land Company (which incorporated Argentine, KS in 1881),the Edison Electric Light Company of Topeka, Shawnee Fire Insurance Company, the Kansas Salt Company. He was interlocked in various other companies as vice-president or treasurer. He was a major stockholder and director of the Bank of Topeka.[5] He was married to Miss Sarah A. Ross of Ohio who hails from the famous Whitaker Steel Family. Joab Mulvane was responsible for the location of the important junction city that bears his name.[citation needed]

Mulvane's Main Street follows part of the Sedgwick and Sumner county lines, and the town center is about five miles west of the spot where Sedgwick, Sumner, Butler and Cowley counties meet.

There were 1,896 households of which 41.0% had children under the age of 18 living with them, 63.0% were married couples living together, 9.3% had a female householder with no husband present, and 23.8% were non-families. 21.0% of all households were made up of individuals and 9.1% had someone living alone who was 65 years of age or older. The average household size was 2.69 and the average family size was 3.14. 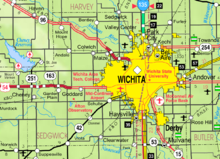