At sign
Not to be confused with Enclosed A: Ⓐ.

The at sign (@), also called the ampersat, apetail, monkey tail, atmark, at symbol, or commercial at, is formally an abbreviation of the accounting and commercial invoice term "at the rate of" (e.g., 7 widgets @ $2 = $14). In recent years its meaning has changed to also mean "at" in the sense of "located at", especially in email addresses. Increasingly, @ has also been used as a prefix to user names (e.g., @username) on social websites, either simply as a textual addition to direct their attention or denote an attribution/link, as on forums and suchlike; or used so that the site's parser will detect and notify the person using that user name of the reference, as on Twitter and Facebook (although the latter's parsing now automatically detects user names without the symbol).

The Underwood Typewriter Company included the symbol on the keyboard of "Underwood No. 5" in 1900, and it was included on subsequent typewriters and their successors' keyboards.

The @ symbol is known by various names in English, including "at sign", "at the rate", "at symbol", "at mark", "commercial at" or "ampersat". This is not to be confused with the ampersand. In keeping with its obvious etymology, it is usually pronounced at.

In Italian, the symbol is informally called the "snail" (chiocciola); its French name is arobase or sometimes arrobe or arobe (from the arroba, an old Spanish and Portuguese unit of weight); in Dutch it is called the "(little) monkey-tail" (apenstaartje); in Hebrew, it is informally called Strudel (שטרודל); in Korean it is called golbaengi or "sea snail" ("골뱅이"); in Japanese it is the "at mark" (アットマーク, atto māku?), and similarly, in German it is called the "at symbol" or "spider monkey" (Klammeraffe); and in Chinese, it is known as the "little mouse".[1] In Spanish and Portuguese it is the symbol for arroba, an archaic unit of weight, and in some Spanish- and Portuguese-speaking countries it is still pronounced this way, even when related to an email address.

In Russian, the symbol is informally called the "dog" (sobaka, собака) or "doggie" (sobachka, собачка). The Finnish sometimes call the symbol miukumauk ("meow meow") owing to the symbol's resemblance to a cat and its tail. In Bulgarian it is called maimunka (маймунка), "little monkey" and in Polish, it is called małpa, meaning "monkey," for its resemblance to a monkey with its arm extended over its head. In Romanian, it is called colloquially A, coadă de maimuţă ("A, monkey-tail") or arond ("a-round").

There are several theories about the origin of the commercial at character:

Arroba sign, used at the "taula de Ariza" registry from 1448, to denote a wheat shipment from Castile to the Kingdom of Aragon.

@ was present in the 1902 model Lambert typewriter made by Lambert Typewriter Company of New York. Its inclusion in the original 1963 ASCII character set was unremarkable as it was a standard commercial typewriter character (the 1961 IBM Selectric typewriter's keyboard included @).

In contemporary English usage, @ is a commercial symbol, called at site or at rate meaning at and at the rate of. It has been used, rarely, in financial documents[clarification needed] or grocers' price tags, and is not used in standard typography.[4]

The most familiar contemporary use of @ is in email addresses (transmitted by SMTP), as in jdoe@example.com (the user jdoe located at site the example.com domain). BBN Technologies' Ray Tomlinson is credited with introducing this usage in 1971.[5] This idea of the symbol representing located at in the form user@host also is seen in other tools and protocols; for example the Unix shell command ssh jdoe@example.net tries to establish a ssh connection to the computer with the hostname example.net using the username jdoe.

On web pages, organizations often obscure email addresses of their members or employees by omitting the @. This practice, known as address munging, makes the email addresses less vulnerable to spam programs that scan the internet for them.

Another contemporary use of the @ symbol in American English is adding information about a sporting event. Opposing sports teams sometime have their names separated by a v. (versus). However, the "v." may be replaced with "@" when also conveying at which team's home field the game will be played. In this case, the away team is written first.[6]

On some online forums without threaded discussions, @ is used to denote a reply; for instance: "@Jane" to respond to a comment Jane made earlier. Similarly, in some cases, @ is used for "attention" in email messages originally sent to someone else. For example, if an email was sent from Catherine to Steve, but in the body of the e-mail, Catherine wants to make Keirsten aware of something, Catherine will start the line "@Keirsten" to indicate to Keirsten that the following sentence concerns her. This also helps with mobile email users who cannot see bold or color in email.

In microblogging (such as Twitter and StatusNet-based microblogs), @ before the user name is used to send publicly readable replies (e.g. "@otheruser: Message text here"). The blog and client software can automatically interpret these as links to the user in question. This use of the @ symbol was also made available to Facebook users on September 15, 2009.[7] In Internet Relay Chat (IRC), it is often shown before a user's nick to mark the operator of a channel.

@ may sometimes be used to substitute for other symbols or meanings:

@ is also used on many wireless routers/modems, where a solid green @ symbol indicates the router is connected and a solid amber @ indicates there is a problem.

@ is used in various programming languages although there is not a consistent theme to its usage. For example:

Gender-neutrality in Spanish and Portuguese

In Portuguese and Spanish, as well in other West Iberian languages where many words end in '-o' when in the masculine gender and end '-a' in the feminine, '@' can be used as a gender-neutral substitute for the default 'o' ending, which some advocates of gender-neutral language-modification feel indicates implicit linguistic disregard for women. These languages do not possess a neutral gender and the masculine forms are also used traditionally when referring to groups of mixed or unknown sex. The at-sign is intended to replace the desinence '-o', including its plural form '-os', due to the resemblance to a digraph of an inner letter 'a' and an outer letter 'o'.

As an example of the '@' being used for gender-inclusive purposes, we can consider the Spanish and Portuguese word amigos. When the word represents not only male friends, but also female ones, the proponents of a gender-inclusive language replace it with amig@s. In this sense, amigos would be used only when the writer is sure the group referred to is all-male. Usage of amigas is the same in traditional and such new forms of communication. Alternative forms for a gender-inclusive at-sign would be the slash sign (amigos/as) and the circle-A (amigⒶs), maybe as a kind of "bisexual digraph". More about it in Satiric misspelling.

The Real Academia Española disapproves the use of the at-sign as a letter.[11] Many Portuguese and Spanish speakers[who?] may also consider this usage degrading. Some[who?] argue it is just more cultural imperialism. Others[who?] that there is no established pronunciation, although there is at least one proposal in this sense. Português Com Inclusão de Gênero (Portuguese With Inclusion of Gender)[12] recommends that Spanish and Portuguese speakers pronounce the at-sign as [ɔ], for /aˈmiɡɔ/. This [ɔ] is the vowel sound between "feminine" [a] (/aˈmiɡa/) and "masculine" [o] (/aˈmiɡo/).[13]

Portuguese With Inclusion of Gender (see Gender-neutrality in Spanish and Portuguese) has also other proposals, including a lower case at-sign '@', since the original sign is as big as an upper-case letter.

"Commercial at" in other languages

In most languages other than English, @ was less common before email became widespread in the mid-1990s, although most typewriters included the symbol. Consequently, it is often perceived in those languages as denoting "The Internet", computerization, or modernization in general. 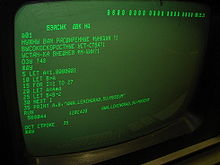 On the final episode of the second series of BBC Radio 4 show The Museum of Curiosity, recorded in London on 19 May 2009 and broadcast on 8 June 2009, author Philip Pullman added the category of "things that were invented for one purpose, but are used for another" to the museum's collection. As an example, Pullman referred to @.[15] The host of the show, QI creator John Lloyd, noted that in other languages the symbol has a proper name, and pledged on QI series A DVD to support widespread use of the term "Astatine" to refer to the symbol. This name was chosen as the chemical element astatine has the chemical symbol "At".[16]