Amphora
This article is about the type of container. For other uses, see Amphora (disambiguation). 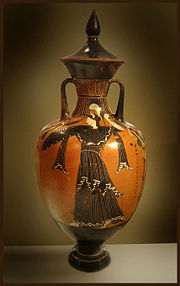 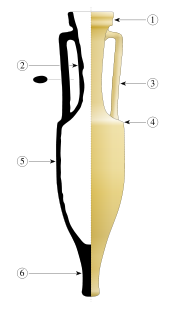 An amphora (plural: amphorae or amphoras) is a type of vase-shaped, usually ceramic (specimens in materials such as metal occur occasionally) container with two handles and a long neck narrower than the body. The word amphora is Latin, derived from the Greek amphoreus (αμφορεύς), an abbreviation of amphiphoreus (αμφιφορεύς), a compound word combining amphi- ("on both sides", "twain") plus phoreus ("carrier"), from pherein ("to carry"), referring to the vessel's two carrying handles on opposite sides.[1]

Further, the term also stands for an ancient Roman unit of measurement for liquids. The volume of a Roman amphora was one cubic foot, ca. 26,026 l.

Amphorae were used in vast numbers to transport and store various products, both liquid and dry, in the ancient Mediterranean world and later the Roman Empire, and in some periods the shape was also used for luxury pottery, which might be elaborately painted. Stoppers of perishable materials which have rarely survived were used to seal the contents. Two principal types of amphorae existed: the neck amphora, in which the neck and body meet at a sharp angle; and the one-piece amphora, in which the neck and body form a continuous curve. Neck amphorae were commonly used in the early history of ancient Greece but were gradually replaced by the one-piece type from around the 7th century BCE onwards. Most were produced with a pointed base to allow upright storage by being partly embedded in sand or soft ground. This also facilitated transport by ship, where the amphorae were tightly packed together, with ropes passed through their handles to prevent breaking or toppling during rough seas. In kitchens and shops amphorae could be stored in racks with round holes in them.

Amphorae varied greatly in height. The largest could stand as much as 1.5 metres (5 ft) high, while some were under 30 centimetres (12 in) high - the smallest were called amphoriskoi (literally "little amphorae"). Most were around 45 centimetres (18 in) high. There was a significant degree of standardisation in some variants; the wine amphora held a standard measure of about 39 litres (41 US qt), giving rise to the amphora quadrantal as a unit of measure in the Roman Empire. In all, around 66 distinct types of amphora have been identified.

Amphorae dated to around 4800 BCE have been found in Banpo, a Neolithic site of the Yangshao culture in China. In the West, Amphorae first appeared on the Phoenician coast around 3500 BCE and spread around the ancient world, being used by the ancient Greeks and Romans as the principal means for transporting and storing grapes, olive oil, wine, oil, olives, grain, fish, and other commodities. They were produced on an industrial scale from Greek times and used around the Mediterranean until about the 7th century CE. Wooden and skin containers seem to have supplanted amphorae thereafter. Amphorae are closely related to the Russian qvevri, which can be traced back to about 6000 BCE.

They are of great benefit to maritime archaeologists, as amphorae in a shipwreck can often indicate the age of the wreck and geographic origin of the cargo. They are occasionally so well preserved that the original content is still present, providing invaluable information on the eating habits and trading systems of the ancient Mediterranean peoples. Amphorae were too cheap and plentiful to return to their origin-point and so, when empty, they were broken up at their destination. In Rome this happened in an area named Testaccio, close to the Tiber, in such a way that the fragments, later wetted with Calcium hydroxide (Calce viva), remained to create a hill now named Monte Testaccio 45 meters tall and more than 1 km in circumference.

Besides coarse amphora used for storage and transport, high-quality painted amphorae were produced in Ancient Greece in significant numbers for a variety of social and ceremonial purposes. Their design differs significantly from the more functional versions; they are typified by wide mouth and a ring base, with a glazed surface and decorated with figures or geometric shapes. Such amphorae were often used as prizes. Some examples, bearing the inscription "I am one of the prizes from Athens", have survived from the Panathenaic Festivals held between the 6th century BCE to the 2nd century BCE. Painted amphorae were also used for funerary purposes. The loutrophoros, a type of amphora, was used principally for funeral rites. Outsize vases were also used as grave markers, while some amphorae were used as containers for the ashes of the dead. By the Roman period utilitarian amphorae were normally the only type produced.

On a neck amphora, the handles are attached to the neck, which is separated from the belly by an angular carination. There are two main types of neck amphorae:

There are also some rarer special types of neck amphora, distinguished by specific features, for example:

In contrast to the Neck amphora, a belly amphora does not have a distinguished neck; instead the belly reaches the mouth in a continuous curve. After the mid-5th century BC, this type was rarely produced. The pelike is a special type of belly amphora, with the belly placed lower, so that the widest point of the vessel is near its bottom. The pelike was introduced around the end of the 6th century BCE.

Another special type is the Panathenaic prize amphora, with black-figure decoraton, produced exclusively as proze vessels for the Panathenaia ansd retaining the black-figure techniqe for centuries after the introduction of red-figure vase painting. Some examples bear the inscription "I am one of the prizes from Athens".

By the Roman period utilitarian amphorae were normally the only type produced.

The first type of Roman amphora, Dressel 1, appears in central Italy in the late 2nd century BCE[2]. This type had thick walls and a characteristic red fabric. It was very heavy, though also strong. Around the middle of the 1st century BCE the so-called Dressel 2-4 starts to become widely used[3]. This type of amphora presented some advantages in being lighter and with thinner walls. It has been calculated that while a ship could accommodate approximately 4500 Dressel 1, it was possible to fit 6000 Dressel 2-4 in the same space[4]. Dressel 2-4 were often produced in the same workshops used for the production of Dressel 1 which almost suddenly ceased to be used[5]. At the same time in Cuma (southern Italy) the production of the cadii cumani type starts (Dressel 21-22). These containers were mainly used for the transportation of fruit and were used until the middle imperial times. At the same time, in central Italy, the so-called Spello amphorae, small containers, were produced for the transportation of wine. On the Adriatic coast the older types were replaced by the Lamboglia 2 type, a wine amphora commonly produced between the end of the 2nd and the 1st century BCE. This type develops later into the Dressel 6A which becomes dominant during Augustan times[6].

In the Gallic provinces the first examples of Roman amphorae were local imitations of pre-existent types such as Dressel 1, Dressel 2-4, Pascual 1, and Haltern 70. The more typical Gallic production begins within the ceramic ateliers in Marseille during late Augustan times. The type Oberaden 74 was produced to such an extent that it influenced the production of some Italic types[7]. Spanish amphorae became particularly popular thanks to a flourishing production phase in late Republican times. The Hispania Baetica and Hispania Tarraconensis regions (south-western and eastern Spain) were the main production areas between the 2nd and the 1st century BCE due to the distribution of land to military veterans and the founding of new colonies. Spanish amphorae were widespread in the Mediterranean area during early imperial times. The most common types were all produced in Baetica and among these there was the Dressel 20, a typical olive oil container, the Dressel 7-13, for garum (fish sauce), and the Haltern 70, for defrutum (fruit sauce). In the Tarraconensis region the Pascual 1 was the most common type, a wine amphora shaped on the Dressel 1, and imitations of Dressel 2-4.

North-African production was based on an ancient tradition which can be traced back to the Phoenician colony of Carthage[8]. Phoenician amphorae had characteristic small handles attached directly onto the upper body. This feature becomes the distinctive mark of late-Republican/early imperial productions which are then called neo-Phoenician. The types produced in Tripolitania and Northern Tunisia are the Maña C1 and C2, later renamed van Der Werff 1, 2, and 3[9]. In the Aegean area the types from the island of Rhodes were quite popular starting from the 3rd century BCE due to local wine production which flourished over a long period. These types developed into the Camulodunum 184, an amphora used for the transportation of Rhodian wine all over the empire. Imitations of the Dressel 2-4 were produced on the island of Cos for the transportation of wine from the 4th century BCE until middle imperial times[10]. Cretan containers were also popular for the transportation of wine and can be found around the Mediterranean from Augustan times until the 3rd century CE[11]. During the late empire period, north-African types dominated amphora production. The so-called African I and II types were widely used from the 2nd until the late 4th century CE. Other types from the eastern Mediterranean (Gaza), such as the so-called Late Roman 4, became very popular between the 4th and the 7th century CE, while Italic productions ceased.

Amphorae were wheel-thrown terracotta containers. During the production process the body was made first and then left to partially dry[12]. Then coils of clay would be added to form the neck, the rim, and the handles[13]. Once the amphora was complete, the interior was then treated with resin in order to ensure better performance for storage of liquids,[14] The reconstruction of these stages of production is based primarily on ethnographic data derived from the study of modern amphora production in some areas of the eastern Mediterranean.[15]. Amphorae are often marked with a variety of stamps and graffiti. The functions of these stamps are related to the entire life of the vessel. Stamps, graffiti and inscriptions provide information from the production cycle to the content and subsequent marketing. A stamp was usually applied to the amphora at a partially dry stage and it often indicates the name of the figlina (workshop) and/or the name of the owner of the workshop. Painted stamps, tituli picti, were executed when the amphora was completed and provided indications regarding the weight of the container and the content.

Chinese celadon vase in form similar to an amphora, Song or Yuan Dynasty

The first systematic classification of Roman amphorae types was undertaken by the German scholar Heinrich Dressel. Following the exceptional amphora deposit uncovered in Rome in Castro Pretorio at the end of the 1800s, he collected almost 200 inscriptions from amphorae and included them in the Corpus Inscriptionum Latinarum. In his studies of the amphora deposit he was the first to elaborate a classification of types, the so-called "Dressel table"[16], which is still used today for many types. Subsequent studies on Roman amphorae have produced more detailed classifications which are usually named after the scholar who studied them. For the neo-Phoenician types see the work by Maña published in 1951,[17] and the revised classification by van der Werff in 1977-1978.[18] The Gallic amphorae have been studied by Laubenheimer in a study published in 1989,[19] whereas the Cretan amphorae have been analyzed by Marangou-Lerat.[20] Beltràn studied the Spanish types in 1970.[21]. Adriatic types have been studied by Lamboglia in 1955.[22] For a general analysis of the Western Mediterranean types see Panella,[23] and Peacock and Williams.[24]