Corpus Inscriptionum Latinarum
For other uses of the abbreviation CIL, see CIL (disambiguation). 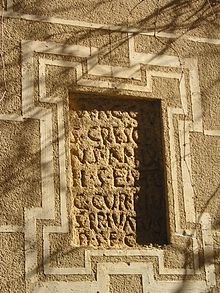 Inscription II 697 in the CIL: in the wall of a building in Cáceres, Spain

The Corpus Inscriptionum Latinarum (CIL) is a comprehensive collection of ancient Latin inscriptions. It forms an authoritative source for documenting the surviving epigraphy of classical antiquity. Public and personal inscriptions throw light on all aspects of Roman life and history. The Corpus continues to be updated in new editions and supplements.

CIL also refers to the organization within the Berlin-Brandenburg Academy of Sciences and Humanities responsible for collecting data on and publishing the Latin inscriptions. It was founded in 1853 by Theodor Mommsen and is the first and major organization aiming at a comprehensive survey.

The CIL collects all Latin inscriptions from the whole territory of the Imperium Romanum, ordering them geographically and systematically. The earlier volumes collected and published authoritative versions of all inscriptions known at the time — most of these had been previously published in a wide range of publications. The descriptions include images of the original inscription if available, drawings showing the letters in their original size and position, and an interpretation reconstructing abbreviations and missing words, along with discussion of issues and problems. The language of the CIL is Latin.

In 1847 a committee was created in Berlin with the aim of publishing an organized collection of Latin inscriptions, which had previously been described piecemeal by hundreds of scholars over the preceding centuries. The leading figure of this committee was Theodor Mommsen[1] (who wrote several of the volumes covering Italy). Much of the work involved personal inspections of sites and monuments in an attempt to replicate the original as much as possible. In those cases where a previously cited inscription could no longer be found, the authors tried to get an accurate reading by comparing the versions of the published inscription in the works of previous authors who had seen the original. The first volume appeared in 1853.

The CIL presently consists of 17 volumes in about 70 parts, recording approximately 180,000 inscriptions. Thirteen supplementary volumes have plates and special indices.[1] The first volume, in two sections, covered the oldest inscriptions, to the end of the Roman Republic; volumes II to XIV are divided geographically, according to the regions where the inscriptions were found. The other volumes cover other topics. Volume XVII, for instance, is entirely devoted to milestones. A volume XVIII is planned, which will contain the "Carmina Latina Epigraphica."[clarification needed] A two-volume "Index of Numbers", correlating inscription numbers with volume numbers, was published in 2003.[2]

The Berlin-Brandenburgische Akademie der Wissenschaften continues to update and reprint the CIL.