The airport, with its five operating terminals, spreads over an operational area of 1,450 acres (5.9 km2), is India's and South Asia's largest and most important airline hub, and handled more than 29.1 million passengers and 670,235 tonnes of cargo in 2010-2011.[6][7] It, along with Delhi's Indira Gandhi International Airport, handles more than half of the air traffic in South Asia.[8][9][10] For the period of Apr–Nov 2010, it was the busiest airport in the country in terms of international passenger traffic and the second busiest in terms of overall passenger traffic.[11] In 2010, the airport was ranked the 30th busiest airport in the world in terms of cargo handled with 671,238 tonnes handled. Formerly called Sahar (international) Airport and Santa Cruz (domestic) Airport, the two airports were merged and renamed after the 17th century Maratha Emperor, Chhatrapati Shivaji Bhosle, to Chhatrapati Shivaji International Airport. In February 2006, Mumbai International Airport Limited, a consortium of GVK Industries Ltd, Airports Company South Africa, and Bidvest,[12] was appointed to carry out the modernisation of Mumbai Airport.

The Juhu Aerodrome functioned as Mumbai's sole airport until 1942 when, due to operational constraints imposed by its low-level location and proximity to the Arabian Sea coastline making it vulnerable during the monsoon season, a move further inland became necessary.

In 1942 a bigger airfield was set up at Santa Cruz, which was also home to several RAF Squadrons from 1942 to 1947 during World War 2. [13] The apron existed on the south side of runway 09/27, and the area, referred to today as the "Old Airport", houses, among others, maintenance hangars of Air India, Air Works India and MIAL's General Aviation Terminal. In its first year, it handled six civilian services a day. Traffic at the airport increased after Karachi was partitioned to Pakistan and as many as 40 daily internal and foreign services operated by 1949. [14]

In 1946 the RAF began the process of handing over the airfield to the civil aviation authorities in India. [15]

By June 1948, a new terminal building and apron had been constructed across the runway 09/27, which was used by Air India for its maiden international flight to London.[16] Named after the neighbourhood in which it stood and initially under the aegis of the Public Works Department, the new airport was subsequently run by the Ministry of Civil Aviation. It's name remained Santa Cruz Airport until the new international terminal at nearby Sahar became operational in 1981.[17] After a major fire gutted the Santa Cruz terminal in 1979, a temporary departure extension or "Gulf Terminal" became functional in October that year. Prior to the fire, plans were already underway by the mid-1970s to construct a new international terminal since Santa Cruz, despite several extensions, had insufficent operational capacity. Even today, the domestic terminals 1-A and 1-B are still commonly referred to as Santa Cruz. Mumbai International Airport Limited (MIAL), a consortium of GVK Industries Limited (GVK) and Airports Company South Africa (ACSA), was appointed to carry out the modernisation of Mumbai Airport in February 2006.[18]

An artist's impression of Terminal 2

The airport consists of two main terminals: Terminal 1 (Santa Cruz) for domestic flights and Terminal 2 (Sahar) for international flights. These terminals use the same airside facilities but are physically separated on the landside, requiring a 15–20 minute (airside) drive between them. The operating agency of the airport (MIAL) operates coach shuttle services between the domestic and international terminals for transit passengers. Terminal 1 is further divided into Terminal 1-A (which opened in April 1992, and serves Air India and Kingfisher Airlines), Terminal 1-B, the original Santa Cruz building used for international and domestic operations (refurbished since 1998, and serves JetLite, SpiceJet, GoAir, IndiGo Airlines, and other private domestic low cost carriers) and Terminal 1-C (which opened in April 2010, is a boarding-only facility used by all airlines). Terminal 2, designed by Aéroports de Paris and opened in January 1981, was structurally divided as 2-A, 2-B, and 2-C. The original complex, 2-A, consisting of parking bays 41–46, namely, gates 3 to 8, were the first aerobridges installed in the subcontinent and served most international carriers airlines whereas 2-C, inaugurated in October 1999, was, originally, exclusively for Air India, Air-India Express, and those carriers whose ground operations were handled by Air India. Terminal 2-B functioned between September 1986 and October 1999 for Air India and handled airlines, before being decommisisoned when 2-C opened. Terminal 2-B, now extensively refurbished is operational following the demolition of 2-A.

From 1 January 2006, both runways were operated simultaneously for three hours in the morning from 0530 to 0830. On average, about 50 flights of smaller aircraft have taken off daily from 14/32 in this time period. Since the experiment was deemed successful it has recently been decided to carry out simultaneous use in the evenings too. It is not clear if this will be for two hours or three hours. A rate of 25 departures per hour is being targeted in the evening slot. The problems with utilising 14/32 are: (i) Mumbai's controversial new control tower erected in 1996 and some 72 m (236 ft) tall penetrates transitional obstacle limitation surfaces by over 50 m (160 ft) for instrument approaches, and in excess of 40 m (130 ft) for visuals. Approach minima at both 14 and 32 ends are higher (based on best approach aid) and are as follows: runway 14 (DA 580 ft (180 m)), runway 32 (MDA 1,440 ft (440 m)) compared to runway 09 (DA 270 ft (82 m)) or runway 27 (DA 230 ft (70 m)), meaning that there is a higher probability of missed approaches and diversions in inclement weather (ii) a hillock, Trombay Hill, lies 4.5 nmi (8.3 km) away from the 32 end, an approach also questioned recently by security agencies because the Bhabha Atomic Research Centre (BARC) nuclear complex at Trombay (Anushakti Nagar) lies within its flight path.

L&T ECCD have been awarded the contract to expand Terminal 1 and to construct a new international terminal. The brand new International Terminal T2 is being designed by Skidmore, Owings and Merrill (SOM). Design Cell, a reputed firm based in Mumbai, Delhi, Bangalore and New York has been appointed as Landscape Architects for the cityside open spaces at the departure and arrival level. 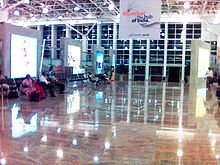 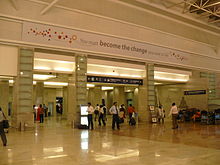 Mumbai International Airport Limited (MIAL), a consortium of GVK Industries Limited (GVK) and Airports Company South Africa (ACSA), was appointed to carry out the modernisation of Mumbai Airport in February 2006. MIAL improved areas of passenger convenience like curbside, terminal entrances, and improved cleanliness. Human resources initiatives were taken such as employee communication and training. Some of the changes that have taken place at CSIA in the recent past include: aesthetic changes, additional check-in counters, refurbished toilets, improved signage, additional food and beverage outlets, better curbside, and management leading to a smoother traffic flow. The Airport's expansion plans have been repeatedly thwarted by slums encroaching onto the airport area.[19]

The graphic design and ambientation of the airport has mainly been created by Argentinan design studio Steinbranding. Landscape improvements were designed by Design Cell, a firm specialising in landscape architecture.

In October 2006, MIAL unveiled the master plan[20] for CSIA, which has been designed to expand and upgrade the infrastructure to cater for 40 million passengers per year and one million metric tonnes of cargo per year by 2010.[21] The separate international and domestic terminals will be merged into one terminal building at the current international building and the current domestic terminal will be converted to a dedicated cargo terminal. MIAL has also incorporated a parallel runway as part of the master plan but there are some obstructions to this part of the which includes land acquisition and rehabilitation of slums as well as relocation of a number of airport facilities.[22]

The implementation will be undertaken in two stages:

New taxiways have been developed to reduce the runway occupancy time by aircraft after landing. MIAL is undertaking the installation of a centralised data system which will provide information about domestic as well as international flights to all display devices at both terminals instead of just one or the other as at present. There are plans to extend the scope of the system to the air traffic control (ATC) and apron control areas, the airport website and even to leading hotel chains. A centralised call centre to provide flight details is also envisaged. While a parallel runway has apparently been ruled out by the AAI and Civil Aviation Ministry, at least for the time being, the ATC tower is now expected to be taken down and relocated to facilitate cross-runway operation.

A Wi-Fi service is available free of charge throughout the airport.[24]

A second parallel runway is one of the options being considered to meet objections raised by the Union Ministry of Environment and Forests against the proposed location of the Navi Mumbai International Airport near Kopra Panvel.

Two alternatives have been mooted by MIAL in unveiled the master plan[20] for CSIA.

The first is an east-west runway parallel to the existing runway 09/27 on the southern side. With a length of 12,500 ft (3,800 m), this runway will easily accommodate the new-generation aircraft, and also be sufficiently distant (more than 800 feet (240 m) apart) from the existing runway; it would, however, necessitate the relocation of Air-India's hangars and maintenance facilities.

The other alternative is to construct the second runway parallel to the current cross runway 14/32 on the northern side, between the international terminal to the north and the Kalina campus university grounds. However, the airport's flight kitchens and the Sahar police station would have to be moved and the area to which they could be relocated is currently occupied by thousands of slum-dwellers. 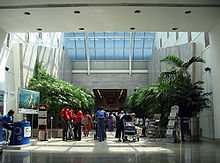 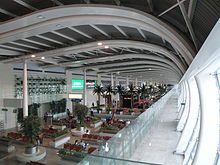 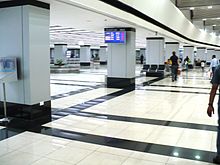 The airport consists of three terminals:

Chhatrapati Shivaji International Airport is the second-busiest airport in the Indian Subcontinent,[26] in terms of passengers carried per year and second-busiest in term of traffic movements.[27][28] The airport oficially handles 36 flights per hour and intends to increase this to 48.[29] The Mumbai-Delhi route was recently ranked by Official Airline Guide (OAG) as the seventh-busiest domestic route in the world, based on the number of flights per week. This airport, along with Delhi's Indira Gandhi International Airport, is the primary international gateway to India and served by approximately 50 international airlines. It is the primary hub for Jet Airways and GoAir and also serves as a secondary hub for a few other airlines, including Air India, IndiGo, JetLite, Kingfisher Airlines and SpiceJet. International traffic peaks late in the night, whilst peak domestic traffic is before 10:00. Nevertheless, at least 45% of traffic flows between 10:00 and 18:30 daily.

In July 2010, the Airport was ranked fourth best in the world for having aerobridges, fancy food courts, spas, and salons.[30] This airport, along with airports in Delhi, Chennai, Bangalore, and Kolkata handles more than 50% of the passengers in India. In the eleven months between April 2006 and February 2007, it handled 180,000 landings and take-offs and over 20 million passengers, with a total of 13.56 million domestic air passengers and 6.73 million international passengers[dated info]. It registered a 21.28% growth in passenger traffic over the previous year 2005–06, when the figure was 17.6 million passengers[31][dated info]. In 2008, for the second year in a row, it was the world's most-delayed airport in terms of arrivals. Only 49.95% of arrivals were on time. About 58% of its late arrivals in 2008 were delayed by 30 minutes or more, although the delay in these arrivals is largely attributed to air congestion at a flight's origin.[32]

There are several fixed base operators at the airport and they include: