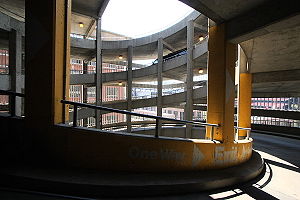 A multi-storey car-park (also called a parking garage, parking structure, parking ramp, parkade or parking deck) is a building designed specifically to be for automobile parking and where there are a number of floors or levels on which parking takes place. It is essentially a stacked car park.

The term multi-storey car park is used in the United Kingdom, Hong Kong and many Commonwealth of Nations countries. In the western United States, the term parking structure is used,[citation needed] especially when it is necessary to distinguish such a structure from the "garage" in a house or an automobile petrol station. In some places in North America, "parking garage" refers only to an indoor, often underground structure – outdoor multi-level parking facilities are referred to by a number of regional terms:

Architects and civil engineers in the USA are likely to call it a parking structure instead, since their work is all about various structures, and that term is the vernacular in some of the western United States. When attached to a high-rise of another use, it is sometimes called a parking podium.[citation needed] In the United States building codes use the term open parking structure to refer to a structure designed for car storage (not repair) that has enough openings in the walls that it does not need mechanical ventilation or fire sprinklers, as opposed to a "parking garage" that requires mechanical ventilation or sprinklers but does not require openings in the walls.[citation needed] The openings provide fresh air flow to disperse either car exhaust or fumes from a fire should one break out within the structure.

The earliest known multi-storey car park was built in 1918 for the Hotel La Salle at 215 West Washington Street in the West Loop area of downtown Chicago, Illinois. It was designed by Holabird and Roche.[1] The Hotel La Salle was demolished in 1976, but the parking structure remained because it had been designated as preliminary landmark status[2] and the structure was located several blocks from the hotel it was built to service. The Hotel LaSalle multi-storey was demolished in 2005 after failing to receive landmark status from the city of Chicago.[3] Jupiter Realty Corp. of Chicago is constructing a 49-storey apartment tower in its place,[4] with construction underway as of March 2008[update].

An alternative claim has emerged from a garage in Glasgow, Scotland that was built between 1906 and 1912.[5]

In the 1920s an English cartoonist imagined a hotel for cars; he drew a multi-storey car park.[6] 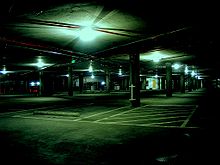 Image of the inside of a multi-storey car park

Movement of vehicles between floors can be effected by: 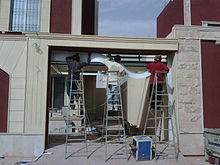 Insulation of a sectional garage door

In locations where the car park is built on sloping land, the car park may be split-level or have sloped parking.

Many car parks are independent buildings that are dedicated exclusively to that use. The design loads for car parks are often less than the office building they serve (50 psf versus 80 psf), leading to long floor spans of 55–60 feet that permit cars to park in rows without supporting columns in between. The most common structural systems in the United States for these structures are either prestressed concrete concrete double tee floor systems or post-tensioned cast-in-place concrete floor systems.

In recent times, car parks built to serve residential and some business properties are built as part of a larger building, and often are built underground as part of the basement, such as at the Atlantic Station redevelopment in Atlanta. This saves land for other uses (as opposed to a parking lot), and is cheaper and more practical in most cases than a separate structure, and is hidden from view. It also protects customers and their cars from weather such as rain, or hot summer sunshine that raises a vehicle's interior temperature to extremely high levels. Historic underground parking of only two levels was considered an innovative concept in 1964, when developer Louis Lesser developed a two level underground parking structure under six 10-story high rise residential halls at California State University, Los Angeles, which lacked space for horizontal expansion on its 176-acre (0.71 km2) university. The simple two level parking structure was considered unusual enough in 1964 that a separate newspaper section was titled, “Parking Underground”, and described the two level parking garage as an innovative “concept” and as “subterranean spaces”.[7][8] In Toronto, a 2,400 space parking lot is located below Nathan Phillips Square and is one of the world's largest. 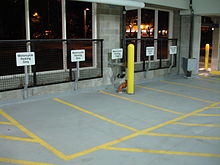 Car parks which serve shopping centres can sometimes be built adjacent to the shopping centre so as to effect easier access at each floor between shops and parking. One example is the Mall of America in Bloomington, Minnesota, USA, which has two large car parks attached to the building at the eastern and western ends of the mall. Another common position for car parks within shopping centres in the UK is on the roof, around the various utility systems, enabling customers to take lifts straight down into the centre. Examples of such are The Oracle in Reading and Festival Place in Basingstoke.

Parking structures are subjected to the heavy and shifting loads of moving vehicles, and must bear the associated physical stresses associated with them. Expansion joints are used between sections not only for thermal expansion, but to accommodate the flexing of the structure's sections due to vehicle traffic. Seismic retrofits can also be applied where earthquakes are an issue.

Occasionally, parking structures have partly collapsed, either during construction or even years later. In July 2009 a fourth-floor section failed at the Centergy building in midtown Atlanta, pancaking down and destroying more than 30 vehicles, but injuring no people. In December 2007, a car crashed into the wall of the deck at the SouthPark Mall in Charlotte, North Carolina, weakening it and causing a small collapse which destroyed two cars below. On the same day, one under construction in Jacksonville, Florida collapsed as concrete was being poured on the sixth floor.[9] In November 2008, the sudden collapse of the middle level of a deck in Montreal was preceded by warning signs for some weeks before, including cracks and water leaks.[10] Parking structures are generally not subject to building inspections after being checked for their initial occupancy permit. 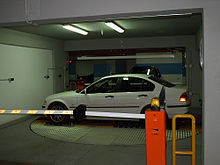 The first historical mention of an automated garage was in a 1931 Popular Mechanics article which featured an underground garage where the car was taken to a parking area by a conveyor then an elevator to shuttles mounted on rails [11] The first Kent Automatic Garages were already in service.

Automatic multi-storey car parks provide lower building cost per parking slot, as they typically require less building volume and less ground area than a conventional facility with the same capacity. However, the cost of the mechanical equipment within the building that is needed to transport cars internally needs to be added to the lower building cost to determine the total costs. Other costs are usually lower too, for example there is no need for an energy-intensive ventilating system, since cars are not driven inside and human cashiers or security personnel may not be needed.

Automated car parks rely on similar technology that is used for mechanical handling and document retrieval. The driver leaves the car in an entrance module. It is then transported to a parking slot by a robot trolley. For the driver, the process of parking is reduced to leaving the car inside an entrance module.

At peak periods a wait may occur before entering or leaving because loading passengers and luggage occurs at the entrance and exit location rather than at the parked stall. This loading blocks the entrance or exit from being available to others. Whether the retrieval of vehicles is faster in an automatic car park or a self park car park depends on the layout and number of exits.

It happens frequently trying to develop parking planning strategies that the parking demand grows often too quickly, significantly and unexpectedly. Modular steel car parks could be the proper solution if the surface area available is not sufficient and can be just expanded upwards or whenever it is not feasible to build up a multistorey parking. The development concept of traditional build modular car parks is made by the modular assembling method of vertical and horizontal elements (such as columns and beams) with a ceiling made of concrete and tarmac: more modular units can build a parking in different sizes and shape. The solution makes possible to develop a parking structure even in case of particular conditions or constraints, such as archaeological sites or city centres, because it allows:

These parking structures are generally demountable and can be relocated so to avoid to make the choice of converting a surface to parking area irrevocably. They are conceived as temporary parking facilities for temporary parking demand needs, whenever the parking demand can be managed dynamically and easily integrated into the planning of urban infrastructures. There is actually a number of cases of parking decks which have been demounted after a few years - to give room to the development of permanent, multistory parking structures- and relocated on the surrounding areas to reply efficiently to the local parking demand needs.