The Central Railway is one of the largest of the 16 zones of Indian Railways. Its headquarters is in Mumbai at Chhatrapati Shivaji Terminus (formerly Victoria Terminus). It includes the first passenger railway line in India, which opened from Bombay to Thane on April 16, 1853.

The central railway covers a large part of the state of Maharashtra and parts of North-Eastern Karnataka and Southern Madhya Pradesh.

The railway zone was formed on November 5, 1951 by grouping several government-owned railways, including the Great Indian Peninsula Railway, the Scindia State Railway of the former princely state of Gwalior, Nizam State Railway and the Dholpur Railways.[1][2]

Constructed in 1907, the narrow gauge Matheran line connects Neral on the Mumbai-Pune main line with the hill station of Matheran in the Western Ghats, east of Mumbai. Neral is linked to Mumbai's Chhatrapati Shivaji Terminus) by frequent suburban electric trains. Steam engines have now been replaced by diesel locomotives but it is still a pleasurable journey. The route is noted for its sharp curves.

It is organized into five divisions: Mumbai CST, Bhusawal, Nagpur, Solapur and Pune. The details of the network divisionwise are as follows [3] 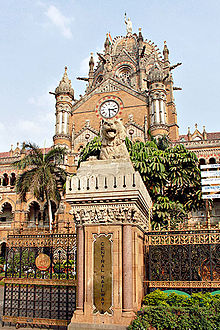 There is a heavy passenger traffic on Mumbai-Bangalore, Mumbai-Chennai, Mumbai-Coimbatore, Mumbai-Tirupati routes. Lot of private buses ply on these routes as all trains on these routes are always full. Starting new trains to Bangalore & Chennai via Pune Miraj route which is under-utilized could help reduce the waiting list on many long distance trains.

The load on Mumbai Division is every growing with the sub-urban local traffic increasing every day. Now Thane-Belapur trans harbour line has also been added to Mumbai division. It is becoming difficult to manage the Mumbai Division day by day. Under these circumstances, it is necessary to re-organize the Central railway by transferring the busy Karjat-Lonavala-Pune section to Pune division and carving a new Division at Miraj junction which now has 4 broad gauge routes connecting it with a heavy passenger and freight traffic. The re-organization would result in following changes to Pune Division:

Creation of Miraj division would reduce the load on the current Mumbai & Pune divisions.