Military academy
This article is about educational institutions. For the 1940 American film, see Military Academy (Film).

A military academy or service academy (in American English) is an educational institution which prepares candidates for service in the officer corps of the army, the navy, air force or coast guard or provides education in a service environment, the exact definition depending on the country concerned. 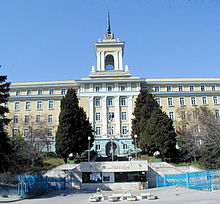 Canada currently has one military-theme private boarding school open for students at the pre-university level, Robert Land Academy (RLA), which is located in West Lincoln, Ontario. Founded in 1978, it is an all-boys' institute whose funding arises solely from tuition fees. The Academy is an institute fully accredited by the province of Ontario, which accepts students from Grade 6 to Grade 12 (the Ontario Academic Credit level).

Canada formerly had three university level service academies, the Canadian Military Colleges. These included the Royal Military College of Canada (RMC) in Kingston, Ontario, Royal Roads Military College (RRMC) in Victoria, British Columbia and the Collège militaire royal de Saint-Jean (CMR) in Saint-Jean-sur-Richelieu, Québec. RMC was founded in 1876, RRMC in 1941 and CMR in 1954.[1] By the 60s all three institutions were providing *military education to officer cadets of all three elements in the Canadian Forces; the navy, army and air force; and RMC received the authority to grant academic degrees in Arts, Science and Engineering.[2]

Graduates of the Colleges are widely acknowledged to have had a disproportionate impact in the Canadian services and society, thanks to the solid foundations provided by their military education.[3] In the modern era, emphasis was placed on a broad based, liberal education including core courses in the humanities, social, pure and applied sciences. Military discipline and training, as well as a focus on physical fitness and fluency in both of Canada's two official languages, English and French, provided cadets with ample challenges and a very fulfilling experience.[4] In 1995 the Department of National Defence was forced to close Royal Roads Military College and Collège militaire royal de Saint-Jean due to budget considerations, but Royal Military College of Canada continues to carry the proud tradition educating Canada's future leaders into the twenty-first century.[5] Royal Roads reopened as a civilian university in the fall of 1995, and is maintained by the Government of British Columbia. In 2007, the Department of National Defence reopened Collège militaire royal de Saint-Jean as a preparatory and first year college.

The Ecole Polytechnique, though its engineering students are enlisted in the military, is sometimes not considered a military academy, as very few of its graduates remain in the military after graduation. 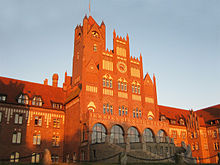 Main complex of the Naval Academy Mürwik of the German Navy with all-ranks-dining hall, historic assembly hall and tower

In Germany there exists a system which clearly differs from the common ones. The only true military academies are in fact the Führungsakademie der Bundeswehr where mainly future staff officers and general staff officers are further trained.

The standard education in military leadership is the task of the Offizierschulen (officer's schools) run by the three branches. The contents differ from branch to branch. In the army all officers are at least trained to lead a platoon. There they also have to pass an officer exam to become commissioned later on.

Moreover there exist so called Waffenschulen like infantry school or artillery school. There the officer's learn to deal with the typical tasks of their respective corps. A specialty of the German concept of officer formation is the academic education. Germany runs two own Universities of the German Federal Armed Forces where almost every future officer has to pass non-military studies and achieve a Bachelor's or Master's degree. During their studies (after at least three years of service) the candidates become commissioned Leutnant (second-lieutenant).

The three officer's schools are:

The Hellenic Armed Forces have military academies supervised by each branch of the Armed Forces individually:

High School level institutions (only for Classical and Scientific Liceum, starting from grade 10):

The 2009-2010 Schoolyear has been the first one with girls attending those schools.

Reserve Officer Training Units (Malay: Pasukan Latihan Pegawai Simpanan or PALAPES) or ROTU exists only in public universities in Malaysia. This is a tertiary institution based officer commissioning program to equip students as officer cadets with military knowledge and understanding for service as Commissioned Officers in the reserve components of the various branches of the Malaysian Armed Forces. 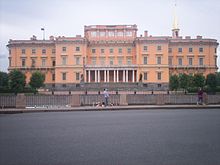 The first stage of training:

The second stage of training:

The third stage of training:

The forth stage of training:

Uganda maintains the followings military training institutions, as of December 2010:[6]

Paralleling the way the School Cadet forces work at a pre-university level, at the university level there are the University Royal Naval Units, University Officer Training Corps (UOTC) and University Air Squadrons. However the mission of the UOTC is not the training of officers.[16]

The United States is almost unique in that the term "military academy" does not necessarily mean an institution run by the armed forces to train its own military officers; it may also mean a middle school, high school or tertiary-level college, whether public or private, which instructs its students in military-style education, discipline and tradition.

Military academies can be either private or have government sponsorship from regional (state) or national government.

The colleges operated by the U.S. Federal Government are referred to as the Federal Service Academies and are:

In addition, five institutions, which were military colleges at the time of their founding, maintain both a corps of cadets and a civilian student body. These are:

Along with the Virginia Military Institute these institutions are known as the Senior Military Colleges.

Note: The terms college and university are interchangeable in the below discussion. They are both used to denote an institution of higher learning which a person might attend after attending high school, typically at age 17, 18, or 19.

A military school teaches various ages (middle school, high school, or both) in a manner that includes military traditions and training in military subjects. The vast majority are in the United States. Many military schools are also boarding schools, and others are simply magnet schools in a larger school system. Many are privately run institutions, though some are public and are run by either a public school system (such as the Chicago Public Schools), or by a state.

A common misconception results because some states have chosen to house their child criminal populations in higher-security boarding schools that are run in a manner similar to military boarding schools. These are also called reform schools, and are functionally a combination of school and prison. They attempt to emulate the high standards of established military boarding schools in the hope that a strict structured environment can reform these children. This may or may not be true. However, this should not reflect on the long and distinguished history of military schools; their associations are traditionally those of high academic achievement, with solid college preparatory curricula, schooling in the military arts, and considerably esteemed graduates.

Popular culture sometimes shows parents sending or threatening to send unruly children off to military school (or boarding school) to teach them good behavior (e.g., in the "Army of One" episode of The Sopranos, Tony and Carmela Soprano consider sending their son, AJ, to the Hudson Military Institute after AJ is expelled from high school but relent when AJ collapses from a panic attack).

A college level military academy is an institute of higher learning of things military. It is part of a larger system of military education and training institutions. The primary educational goal at military academies is to provide a high quality education that includes significant coursework and training in the fields of military tactics and military strategy. The amount of non-military coursework varies by both the institution and the country, and the amount of practical military experience gained varies as well.

Military academies may or may not grant university degrees. In the U.S., graduates have a major field of study, earning a Bachelor's degree in that subject just as at other universities. However, in British academies, the graduate does not achieve a university degree, since the whole of the one-year course (nowadays undertaken mainly but not exclusively by university graduates) is dedicated to military training.

There are two types of military academies: national (government-run) and state/private-run.