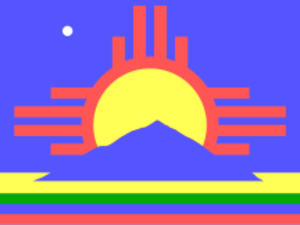 Roswell is a city in and the of Chaves County in the southeastern quarter of the state of , .GR|6 The population was 45,293 at the 2000 census. It is a center for ing, ing, , , distribution, and production. It is also the home of (NMMI), founded in 1891. is located a few miles northeast of the city on the .

Roswell is most popularly known for having its name attached to what is now called the 1947 , even though the actual crash site was some seventy-five miles from Roswell and closer to Corona. However, the investigation and debris recovery was handled by the local .

The first non-indigenous settlers of the area around Roswell were a group of pioneers from , who attempted to start a settlement 15 miles southwest of what is now Roswell in 1865 but were forced to abandon the site because of a lack of water.

, a businessman from , and his partner, , constructed two adobe buildings in 1869 that began what is now Roswell. The two buildings became the settlement's general store, post office, and sleeping quarters for paying guests. In 1871, Smith filed a claim with the federal government for the land around the buildings, and on , , he became the town's first postmaster. Van C. Smith was the son of Roswell Smith, a prominent lawyer in , and Annie Ellsworth, daughter of U.S. Patent Commissioner . He called the town Roswell, after his father's first name.

Roswell was originally a part of Lincoln County that included all of southeastern New Mexico, but in 1889 Chaves County was carved out of the larger county, and Roswell became its county seat. The Roswell, NM Post Office uses 88201, 88202, and 88203.

In 1877, Captain and his family bought out Smith and Wilburn's claim and became the owners of most of the land of Roswell and the area surrounding it. The town was relatively quiet during the (1877-1879). A major was discovered when merchant had a well drilled in his back yard on Richardson Avenue in 1890, resulting in the area's first major growth and development spurt. The growth continued when a railroad was built through town in 1893.

During , a was located in nearby Orchard Park. The German prisoners of war were used to do major infrastructure work in Roswell, such as paving the banks of the . Some POWs used rocks of different sizes to create the outline of an iron cross among the stones covering the north bank. Later, the iron cross was covered with a thin layer of concrete. In the 1980s, a crew cleaning the river bed cleared off the concrete and revealed the outline once more. The small park just south of the cross was then known as Iron Cross Park. On November 11, 1996 the park was renamed POW/MIA park. The park displays a piece of the , presented to the City of Roswell by the German Air Force.

In the 1930s, Roswell was a site for much of Robert Goddard's early rocketry work. It is also the birthplace of actress , musician , and Hall of Fame . A Golf Hall of Famer, , was reared in Roswell (though born in ). A Hall of Famer astronaut, sixth man on the moon , attended school in Roswell. (later of the ) played football at NMMI, and (later of the ) played there. The professional baseball record for home runs in a season, 72, was set in 1954 by of the Roswell Rockets, who took up permanent residence there (the record was broken in 2001 by ).

Roswell was a location of military importance from 1941 to 1967, at which time was decommissioned. After the closure of the base, Roswell capitalized on its pleasant climate and reinvented itself as a retirement community. Roswell has benefited from interest in the alleged incident, and in more recent times the business community has deliberately sought out tourists interested in UFOs.

In the early 1980s, a major manufacturer, , which produced buses opened a factory in Roswell. The factory has opened and closed repeatedly, resulting in cyclical swings of unemployment. TMC stopped building buses. used the same buildings to manufacture buses but has also closed. The plant was reopened by in 2003.

In 2002, Roswell was named one of the All-American cities.

* , a branch of that is located in . The Roswell campus offers several certificate and associate programs. There are also bachelor's and master's programs via ENMU's Instructional Television System (ITV). http://www.roswell.enmu.edu/

* , which is served by Also served by Pecos Trails Transit.

* In the movie "" there is a team called the Roswell Aliens.
* On the television series "" in the episode called "The Unnatural", an extraterrestrial passing as human plays minor league baseball for a team named the Roswell Grays.
* There is a level based on this city in .
* Roswell is mentioned at the turning point in the movie ".
* A hit teen drama, , aired in the late 1990s and early 2000s, centering around the existence of aliens living in Roswell, NM.
* The American band sings about the alien incident in their song "Home" (from the album ). The lyrics are sung from the point of view of the alien, who states, "I might as well...land in Roswell".