The Combined Cadet Force (CCF) is a Ministry of Defence sponsored youth organisation in the United Kingdom. Its aim is to "provide a disciplined organisation in a school so that pupils may develop powers of leadership by means of training to promote the qualities of responsibility, self reliance, resourcefulness, endurance and perseverance". It is not a pre-service organisation, although it acknowledges that one of its objectives is "to encourage those who have an interest in the services to become Officers of the Regular or Reserve Forces", and a significant number of officers have indeed had experience in the CCF. Prior to 1948 cadet forces in schools existed as part of the Officers' Training Corps framework, but in 1948 Combined Cadet Force was formed covering cadets affiliated to all three services.

On 12 May 1859, the Secretary of State for War sent out a circular letter to the public schools and Universites inviting them to form units of the Volunteer Corps.[1] Arguably, the first school cadet corps was established at Rossall School in February 1860,[2] initially as an army contingent only. Felsted already had an armed drill contingent at the time of the War Office letter under the command of Sgt. Major Rogers RM; its claim on these grounds to be the oldest school corps was upheld by Field Marshal Earl Roberts in a letter to the Headmaster of 1904.[3] Other corps were very quickly formed in 1860 at four further schools: Eton, Harrow, Hurstpierpoint and Rugby; in the absence of further evidence it seems fair to say that all six schools should be equally credited with seniority, with a given date of 1860.[4] In 1908, the units were re-titled the Officer Training Corps (OTC)[5] Today, unit contingents exist in UK independent schools, many grammar schools and a handful of comprehensive schools.

The CCF is distinct from the Sea Cadet Corps, Army Cadet Force, and Air Training Corps.

Pupils normally join around the age of 13 or 14, with both sexes able to take part. A school contingent may have any combination of Royal Navy, Army, Royal Air Force sections, and sometimes Royal Marines. The Army Section is almost invariably the largest.

The CCF movement is dominated by the independent sector with the majority of contingents still being based in public schools. It was reported in 2008 that some Public School CCF detachments would be opened to pupils of local state schools.[6]

In 2001, the then Minister of State for Defence replied to a question posed in Parliament about how many CCFs were currently affiliated to the MOD.[7]

In October 2007 the under-secretary of state for defence gave details of the total number of CCF sections, and the number in state schools.[9]

Most Cadet ranks are standard non-commissioned ranks, prefixed by "Cadet", for day-to-day administration the "Cadet" prefix is often omitted. The highest rank depends on the size of the contingent, but are usually Cadet Coxswain (Royal Navy Section), Warrant Officer 1st and 2nd class, usually also Cadet Regimental or Company Sergeant Major, (Army and RM Sections) and Cadet Warrant Officer (RAF Section). Rank slides are worn on the front of the combat jacket or shirt and have the letters CCF under the emblem.

Senior cadets may also hold other appointments; for example the senior cadet in a CCF band[citation needed] or Corps of Drums may be appointed as a Cadet Drum Major.

Some contingents may have Junior (and sometimes Senior) Under Officers. Cadet Under Officers' rank badges are white bands 12 mm wide across each shoulder slide, the same ranks insignia as Officer Cadets with the addition of the letters CCF underneath.

The two regulation uniforms for RN cadets are No. 4 working dress and No. 3 parade dress. These are differentiated from regular RN uniform by the wearing of brassards, which show rate, qualification and skills, and the 'CCF RN' rank slide. They may be issued with combat uniform if required and some schools have No 1 uniform for senior cadets.

Cadets in the CCF(RM) wear DPM (camouflage) trousers, combat jackets, and shirts (CS95) along with boots much the same as the army section.

Army cadets usually wear the Combat Soldier 95 Pattern (CS95) uniform as worn by regular soldiers although some contingents still have 'lightweight' OG (olive green) uniform or older pattern combat uniform . Ranks are shown with qualifications on a brassard, or with combats on a rank slide marked 'CCF'.

RAF cadets wear No.2 dress, either with dark blue shirt (2c) or 'Wedgwood' (2, 2a, 2b). They are distinguished from regular personnel by their brassards. They may be issued with combat uniform if required.

CCF officers are often teachers from the school, and are not normally eligible to be called up. They hold acting officer ranks up to and including lieutenant colonel (the highest substantive rank is that of lieutenant) or its equivalent in the other services. Unlike in the external cadet organisations (ATC/SCC/ACF), all instructors permanently based at a contingent are officers, as historically they were normally teachers and so 'professionally qualified'[citation needed].

CCF(Army) and CCF(RAF) Officers hold commissions in special categories of the reserves of their service. CCF(RN) Officers are 'appointed' and do not hold commissions, albeit their ranks are the same as for RN (and RNR) officers with the suffix RNR(CCF), their rank braid is 'wavy', the same form as used in the past by the RNVR. CCF(Army) officers hold commissions in TA Group 'B' (the same group as UOTC Officer Cadets), and wear a CCF marking on their rank slides. Unlike officers in the Army Cadet Force CCF(Army) officers do not attend the Army Officer Selection Board and are selected based on recommendation from the Headmaster of the employing school. CCF(RAF) officers' commissions are Volunteer Reserve (Training Branch) (RAF VR(T)), and they wear a VRT pin on their rank braid to signify this.

In the main supporting role to the officers is the 'SSI' (school staff instructor), who is usually an ex-forces SNCO or Warrant Officer. They retain their rank as a courtesy and are employed by the school to instruct and assist in the running of the Contingent.[11] Whilst the majority of the SSIs are SNCOs it is also possible for them to be a commissioned officer. There is usually one SSI per Contingent and they are supported by serving regular Non-Commissioned Officers from Cadet Training Teams (CTT).

In addition to the SSI some contingents may have one or more Civilian Instructors.[12] These are Adult Volunteers who normally instruct in a specialised role (first aid, signals etc.) when the establishment level of officers does not include persons with sufficient knowledge to teach these subjects. They receive no pay for time spent with cadets but may claim reimbursement for expenses at the Contingent Commander's discretion. Many are members of the academic or support staff at the school.[13][14][15] 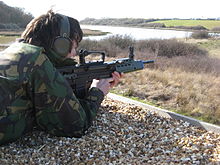 A Cadet Fires the L98 A1 Cadet GP Rifle.

The different sections naturally have different syllabi with a degree of overlap. All the sections learn drill and all cadets are trained to fire the L98A2 5.56 mm Cadet General Purpose rifle, a semi-automatic only version of the L85A2 used by the UK armed forces. There are also opportunities to fire the the .22 No.8 rifle and the L81 Cadet Target Rifle.

Cadets in the Royal Navy section receive instruction in boat-work and other naval subjects (including flying with the Fleet Air Arm). The Royal Navy also offers many CCF courses during the school holidays which are open to any members of any CCF. The Royal Marines section, although a part of the Navy, tend to train independently, covering battle drills, weapons handling and marksmanship, fieldcraft, camouflage and concealment and the history of the Royal Marines.

Army section cadets are sometimes able to specialise in subjects such as signalling, REME skills and infantry tactics, and are trained accordingly. 2006 Health and Safety/Child Protection legislation (and fallout from the Deepcut affair) mandated that cadets must be housed separately by both gender and age (under 18s and over 18s), and as most MOD accommodation cannot cope with this leading to a reduction in the number of courses offered to cadets[citation needed].

RAF section cadets are given the opportunity to fly in both powered aircraft, most notably the Grob Tutor and Vigilant T.1 and in unpowered gliders such as the Viking TX.1 and their training and flying courses are identical to those available to members of the Air Training Corps.

All sections can undertake leadership courses at Frimley Park, Nesscliff or RAF Cranwell, as well as adventurous training. There are also other courses available for cadets to enhance their skills, such as Junior and Senior Cadet Instructor Courses (JCIC, SCIC).

Some schools recognise that pupils may not wish to participate in CCF activities and so alternative organisations exist, such as the Community Service Organisation, which allows pupils to volunteer to help in hospitals, schools, and charity work.[16][17]

Other activities often on offer are:

A few other schools make CCF attendance voluntary (like Victoria College)- this tends to reduce numbers compared to compulsory contingents, but potentially results in a more uniformly dedicated membership that responds well to training as well as CCF activities many CCF's also offer the chance for RYA, NICAS, BTEC and Duke of Edinburgh qualifications on top of their CCF training programmes.

Some of the voluntary CCF schools also run the other options such as community service.