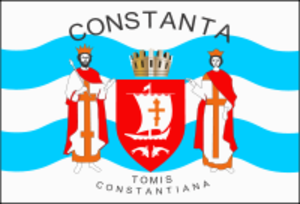 Constanţa (pronunciation in Romanian: IPA|/kon'stan.ʦa/; historical names: "Tomis", _el. Κωνστάντια or "Constantia", _tr. Köstence, _bg. Кюстенджа) is the oldest city in . Constanţa has the biggest harbour on the , , the fourth largest in Europe,Fact|date=January 2008 having the potential in the next few years to become the second largest in Europe after .

A number of inscriptions found in the town and its vicinity show that Constanţa lies where once Tomis stood. Tomis (also called Tomi) was a in the province of on the 's shore, founded around 500 BC for commercial exchanges with local - populations. Probably the name is derived from Greek "Τομή" meaning cut, section.

According to the Bibliotheca it was founded by :

: "When Aeetes discovered the daring deeds done by , he started off in pursuit of the ship; but when she saw him near, Medea murdered her brother and cutting him limb from limb threw the pieces into the deep. Gathering the child's limbs, Aeetes fell behind in the pursuit; wherefore he turned back, and, having buried the rescued limbs of his child, he called the place Tomi. ":( Bibliotheke I, ix, 24 )

According to (after ), the founder of the city was a queen (Jord. De origine actibusque Getarum, ""):

: "After achieving this victory (against ) and winning so much booty from her enemies, Queen crossed over into that part of which is now called Lesser Scythia - a name borrowed from Great -, and built on the Moesian shore of the Black Sea the city of Tomi, named after herself."

In 29 BC the Romans captured the region from the , and annexed it as far as the Danube, under the name of "Limes Scythicus".

In AD 8, the Roman poet (43 BC-17) was banished here by and died there eight years later, celebrating the town of Tomis in his poems. A statue of Ovid stands in the Ovid Square (Piaţa Ovidiu) of Constanţa, in front of the History Museum (the former City Hall).

The city was afterwards included in the Province of , and, from the time of , in , of which it was the metropolis. After the split of the , Tomis fell under the rule of . During , Tomis was besieged by the Avars in winter 597/598.

Tomis was later renamed to Constantiana in honour of Constantia, the half-sister of (274-337). The earliest known usage of this name was "Κωνστάντια" ("Constantia") in 950. The city lay at the seaward end of the Great Wall of Trajan, and has evidently been surrounded by fortifications of its own.

After successively becoming part of the s, the independent principality of /Dobrotici and of under , Constanţa fell under the Ottoman rule around 1419.

A railroad linking Constanţa to was opened in 1860. In spite of damage done by railway contractors there are considerable remains of ancient masonry walls, pillars, etc. An impressive public building, thought to have originally been a port building, has been excavated, and contains the substantial remains of one of the longest pavements in the world. In 1878, after the , Constanţa and the rest of were ceded by the to . The city became 's main seaport and transit point for much of Romania's exports.

On , (during the ), Constanţa was occupied by the (German, Turkish and Bulgarian troops). According to the Treaty of Bucharest in May 1918, article 10.b (treaty which has never been ratified by Romania), Constanţa remained under the joint control of the Central Powers. The city was liberated by the Allied troops in 1918 after the successful offensive on the front which knocked Bulgaria out of the war.

In the vicinity there are , and the sea-bathing also attracts many visitors in summer. is a beach resort immediately to the north.

Constanţa has a moderate continental climate with considerable maritime and some Mediterranean influences. There are four distinct seasons during the year.

Summers are warm, dry and sunny with a July average of 23°C. Constanţa rarely experiences very hot days often found in the interior, because of the moderating influence of the Black Sea. Summers settle around early June and end in mid-September.

Autumns start late September, they are long and relatively warm. Nights can still be tropical (temperatures above 20°C) on an average of 10 days in September. September is often warmer than June, because of the heat accumulated by the Black Sea. The first frost occurs on average on .

Winter is much balmier compared to other cities in southern Romania. Snow is not abundant but the weather can be very windy and thus, unpleasant. Winter arrives much later than in the interior and December weather is often mild with high temperatures reaching 12 °C. Average January temperature is +0.4°C. Winter storms when the sea becomes particularly treacherous are a common occurrence between December and March.

Spring arrives early but it's quite cool. Often in April and May the Black Sea coast is one of the coolest places in Romania at an altitude lower than 500 m.

The winter of 2007 was the warmest in recorded history. The January average was 6.5°C showing an exceptional 6 degrees departure above the normal. The summer of 2007 was the second hottest in history (after the summer of 1946) with a record breaking June average temperature of 23.0°C - 3.5 degrees above the normal. Overall the year 2007 was the warmest in recorded history in Constanta with an average temperature of 13.62°C.

According to the 2002 census, the population of Constanţa city proper (the Municipality) was 310,471. According to the National Institute of Statistics' 2006 Statistical Yearbook Constanţa is the fourth largest Romanian city. [http://www.insse.ro/cms/files/pdf/en/cp2.pdf] The municipality of Constanţa and the neighboring localities make up a permanent population of487,000 inhabitants, i.e. 65% of the total population of the county, and a minimum average of 120,000 per day, tourists or seasonal workers, come-and-go people during the high tourist season.