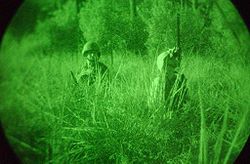 Night vision is the ability to see in low light conditions. Whether by biological or technological means, night vision is made possible by a combination of two approaches: sufficient spectral range, and sufficient intensity range. Humans have poor night vision compared to many animals, in part because the human eye lacks a tapetum lucidum.[1]

Night-useful spectral range techniques can sense radiation that is invisible to a human observer. Human vision is confined to a small portion of the electromagnetic spectrum called visible light. Enhanced spectral range allows the viewer to take advantage of non-visible sources of electromagnetic radiation (such as near-infrared or ultraviolet radiation). Some animals can see using much more of the infrared and/or ultraviolet spectrum than humans.

Sufficient intensity range is simply the ability to see with very small quantities of light.[2]

Many animals have better night vision than humans do, the result of one or more differences in the morphology and anatomy of their eyes. These include having a larger eyeball, a larger lens, a larger optical aperture (the pupils may expand to the physical limit of the eyelids), more rods than cones (or rods exclusively) in the retina, and a tapetum lucidum.

Enhanced intensity range is achieved via technological means through the use of an image intensifier, gain multiplication CCD, or other very low-noise and high-sensitivity array of photodetectors.

For more details on this topic, see Adaptation (eye).

In biological night vision, molecules of rhodopsin in the rods of the eye undergo a change in shape as they absorb light. Rhodopsin is the chemical that allows night-vision, and is extremely sensitive to light. Exposed to a spectrum of light, the pigment immediately bleaches, and it takes about 30 minutes to regenerate fully, but most of the adaptation occurs within the first five or ten minutes in the dark. Rhodopsin in the human rods is less sensitive to the longer red wavelengths of light, so many people use red light to help preserve night vision as it only slowly depletes the eye's rhodopsin stores in the rods and instead is viewed by the cones.

Many animals have a tissue layer called the tapetum lucidum in the back of the eye that reflects light back through the retina, increasing the amount of light available for it to capture. This is found in many nocturnal animals and some deep sea animals, and is the cause of eyeshine. Humans lack a tapetum lucidum.

Nocturnal mammals have rods with unique properties that make enhanced night vision possible. The nuclear pattern of their rods changes shortly after birth to become inverted. In contrast to contemporary rods, inverted rods have heterochromatin in the center of their nuclei and euchromatin and other transcription factors along the border. In addition, the outer nuclear layer (ONL) in nocturnal mammals is thick due to the millions of rods present to process the lower light intensities of a few photons. Rather than being scattered, the light is passed to each nucleus individually.[3] In fact, an animal's ability to see in low light levels may be similar to what humans see when using first- or perhaps second-generation image intensifiers.[citation needed]

A larger size of pupil relative to the rest of the eye, also aids night vision.[citation needed]

Thermal imaging
Thermal imaging technologies work by detecting the temperature difference between the background and the foreground objects. 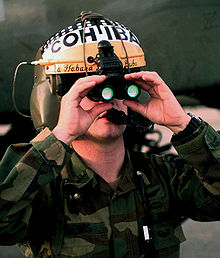 Binoculars (night vision goggles on flight helmet) Note: the green color of the objective lenses is the reflection of the Light Interference Filters, not a glow.

Night glasses are telescopes or binoculars with a large diameter objective. Large lenses can gather and concentrate light, thus intensifying light with purely optical means and enabling the user to see better in the dark than with the naked eye alone. Often night glasses also have a fairly large exit pupil of 7 mm or more to let all gathered light into the user's eye. However, many people can't take advantage of this because of the limited dilation of the human pupil. To overcome this, soldiers were sometimes issued atropine eye drops to dilate pupils. Before the introduction of image intensifiers, night glasses were the only method of night vision, and thus were widely utilized, especially at sea. Second World War era night glasses usually had a lens diameter of 56 mm or more with magnification of seven or eight. Major drawbacks of night glasses are their large size and weight. 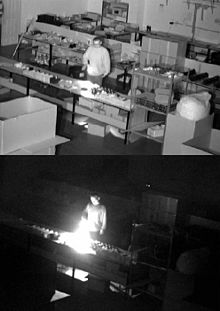 Imaging results with (top) and without (bottom) active-infrared.

Active infrared night vision combines infrared illumination of spectral range 700–1,000 nm (just below the visible spectrum of the human eye) with CCD cameras sensitive to this light. The resulting scene, which is apparently dark to a human observer, appears as a monochrome image on a normal display device.[4]

Laser range gated imaging is another form of active night vision which utilizes a high powered pulsed light source for illumination and imaging. Range gating is a technique which controls the laser pulses in conjunction with the shutter speed of the camera's detectors.[7] Gated imaging technology can be divided into single shot, where the detector captures the image from a single light pulse to multi-shot, where the detector integrates the light pulses from multiple shots to form an image.

One of the key advantages of this technique is the ability to perform target recognition as opposed to detection with thermal imaging.

The image intensifier is a vacuum-tube based device that converts visible light from an image so that a dimly lit scene can be viewed by a camera or the naked eye. While many believe the light is "amplified," it is not. When light strikes a charged photocathode plate, electrons are emitted through a vacuum tube that strike the microchannel plate that cause the image screen to illuminate with a picture in the same pattern as the light that strikes the photocathode, and is on a frequency that the human eye can see. This is much like a CRT television, but instead of color guns the photocathode does the emitting.

The image is said to become "intensified" because the output visible light is brighter than the incoming IR light, and this effect directly relates to the difference in passive and active night vision goggles. Currently, the most popular image intensifier is the drop-in ANVIS module, though many other models and sizes are available at the market.

A night vision device (NVD) is a device comprising an image intensifier tube in a rigid casing, commonly used by military forces. Lately, night vision technology has become more widely available for civilian use. For example, enhanced vision systems (EVS) have become available for aircraft to help pilots with situational awareness and avoid accidents. These systems are included in the latest avionics packages from manufacturers such as Cirrus and Cessna.

A specific type of NVD, the night vision goggle (NVG) is a night vision device with dual eyepieces. The device can utilize either one intensifier tube with the same image sent to both eyes, or a separate image intensifier tube for each eye. Night vision goggle combined with magnification lenses constitutes night vision binoculars. Other types include monocular night vision devices with only one eyepiece which may be mounted to firearms as night sights. NVG and EVS technologies are becoming more popular products for helicopter operations to improve safety. The NTSB is considering EVS as recommended equipment for safety features.