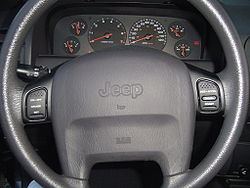 Cruise control (sometimes known as speed control or autocruise) is a system that automatically controls the speed of a motor vehicle. The system takes over the throttle of the car to maintain a steady speed as set by the driver.

Speed control with a centrifugal governor was used in automobiles as early as the 1910s, notably by Peerless. Peerless advertised that their system would "maintain speed whether up hill or down". The technology was invented by James Watt and Matthew Boulton in 1788 to control steam engines. The governor adjusts the throttle position as the speed of the engine changes with different loads.

Modern cruise control (also known as a speedostat) was invented in 1945 by the blind inventor and mechanical engineer Ralph Teetor. His idea was born out of the frustration of riding in a car driven by his lawyer, who kept speeding up and slowing down as he talked. The first car with Teetor's system was the Chrysler Imperial in 1958. This system calculated ground speed based on driveshaft rotations and used a solenoid to vary throttle position as needed.

A 1955 U.S. Patent for a "Constant Speed Regulator" was filed in 1950 by M-Sgt Frank J. Riley.[1] He installed his invention, which he conceived while driving on the Pennsylvania Turnpike, on his own car in 1948.[2] Despite this patent, the inventor, Riley, and the subsequent patent holders were not able to collect royalties for any of the inventions using cruise control.

Cruise control is a system that automatically controls the speed of an automobile. The driver sets the speed and the system takes over the throttle of the car to maintain the speed. The system thereby improves driver comfort in steady traffic conditions. In congested traffic conditions, where speeds vary widely, these systems are no longer effective. Most cruise control systems do not allow the use of cruise control below a certain speed. The use of cruise control would be significantly increased if the vehicle speed could automatically adapt to the traffic flow. This feature can be handy for long drives along sparsely populated roads, and usually results in better fuel efficiency. It is also known in some places as “poor man’s radar detector”, as by cruise control, a driver who otherwise tends to unconsciously increase speed over the course of a highway journey may avoid a speeding ticket.

In modern designs, the cruise control may need to be turned on before use — in some designs it is always "on" but not always enabled (not very common), others have a separate "on/off" switch, while still others just have an "on" switch that must be pressed after the vehicle has been started. Most designs have buttons for "set", "resume", "accelerate", and "coast" functions. Some also have a "cancel" button. Alternatively, depressing the brake or clutch pedal will disable the system so the driver can change the speed without resistance from the system. The system is operated with controls easily within the driver's reach, usually with two or more buttons on the steering wheel spokes or on the edge of the hub like those on Honda vehicles, on the turn signal stalk like in many older General Motors vehicles or on a dedicated stalk like those found in, particularly, Toyota and Lexus. Earlier designs used a dial to set speed choice.

The driver must bring the vehicle up to speed manually and use a button to set the cruise control to the current speed. The cruise control takes its speed signal from a rotating driveshaft, speedometer cable, wheel speed sensor from the engine's RPM, or from internal speed pulses produced electronically by the vehicle. Most systems do not allow the use of the cruise control below a certain speed (normally around 25 mph). The vehicle will maintain the desired speed by pulling the throttle cable with a solenoid, a vacuum driven servomechanism, or by using the electronic systems built into the vehicle (fully electronic) if it uses a 'drive-by-wire' system.

All cruise control systems must be capable of being turned off both explicitly and automatically when the driver depresses the brake, and often also the clutch. Cruise control often includes a memory feature to resume the set speed after braking, and a coast feature to reduce the set speed without braking. When the cruise control is engaged, the throttle can still be used to accelerate the car, but once the pedal is released the car will then slow down until it reaches the previously set speed.

On the latest vehicles fitted with electronic throttle control, cruise control can be easily integrated into the vehicle's engine management system. Modern "adaptive" systems (see below) include the ability to automatically reduce speed when the distance to a car in front, or the speed limit, decreases. This is an advantage for those driving in unfamiliar areas.

The cruise control systems of some vehicles incorporate a "speed limiter" function, which will not allow the vehicle to accelerate beyond a pre-set maximum; this can usually be overridden by fully depressing the accelerator pedal. (Most systems will prevent the vehicle accelerating beyond the chosen speed, but will not apply the brakes in the event of overspeeding downhill.)

Daniel Aaron Wisner invented Automotive Electronic Cruise Control in 1968 as an engineer for RCA's Industrial and Automation Systems Division in Plymouth, Michigan. His invention described in two patents filed that year (#3570622 & #3511329), with the second modifying his original design by debuting digital memory, was the first electronic gadgetry to play a role in controlling a car and ushered in the computer-controlled era in the automobile industry. Two decades lapsed before an integrated circuit for his design was developed by Motorola Inc. as the MC14460 Auto Speed Control Processor in CMOS. As a result, cruise control was eventually adopted by automobile manufacturers as standard equipment and nearly every car built and many trucks are fitted with a configuration of the circuitry and hardware nearly identical to his prototype. The advantage of electronic speed control over its mechanical predecessor, which was featured on luxury models but never gained wide acceptance, was that it could be easily integrated with electronic accident avoidance and engine management systems.

Some of those advantages include:

However, cruise control can also lead to accidents due to several factors, such as:

Driving over "rolling" terrain, with gentle up and down portions, can usually be done more economically (using less fuel) by a skilled driver viewing the approaching terrain, by maintaining a relatively constant throttle position and allowing the vehicle to accelerate on the downgrades and decelerate on upgrades, while reducing power when cresting a rise and adding a bit before an upgrade is reached. Cruise control will tend to overthrottle on the upgrades and retard on the downgrades, wasting the energy storage capabilities available from the inertia of the vehicle. The inefficiencies from cruise control can be even greater relative to skilled driving in hybrid vehicles.[citation needed]

Many countries[which?] establish that it is illegal to drive within city limits with the cruise control feature activated.[citation needed]

Some modern vehicles have adaptive cruise control (ACC) systems, which is a general term meaning improved cruise control. These improvements can be automatic braking or dynamic set-speed type controls.

Automatic Braking Type: The automatic braking type use either a radar or laser setup to allow the vehicle to keep pace with the car it is following, slow when closing in on the vehicle in front and accelerating again to the preset speed when traffic allows. Some systems also feature forward collision warning systems, which warns the driver if a vehicle in front—given the speed of both vehicles—gets too close (within the preset headway or braking distance).

Dynamic Set Speed Type: The dynamic set speed uses the GPS position of speed limit signs, from a database. Some are modifiable by the driver. At least one, Wikispeedia, incorporates crowdsourcing, so driver input is shared, improving the database for all users.